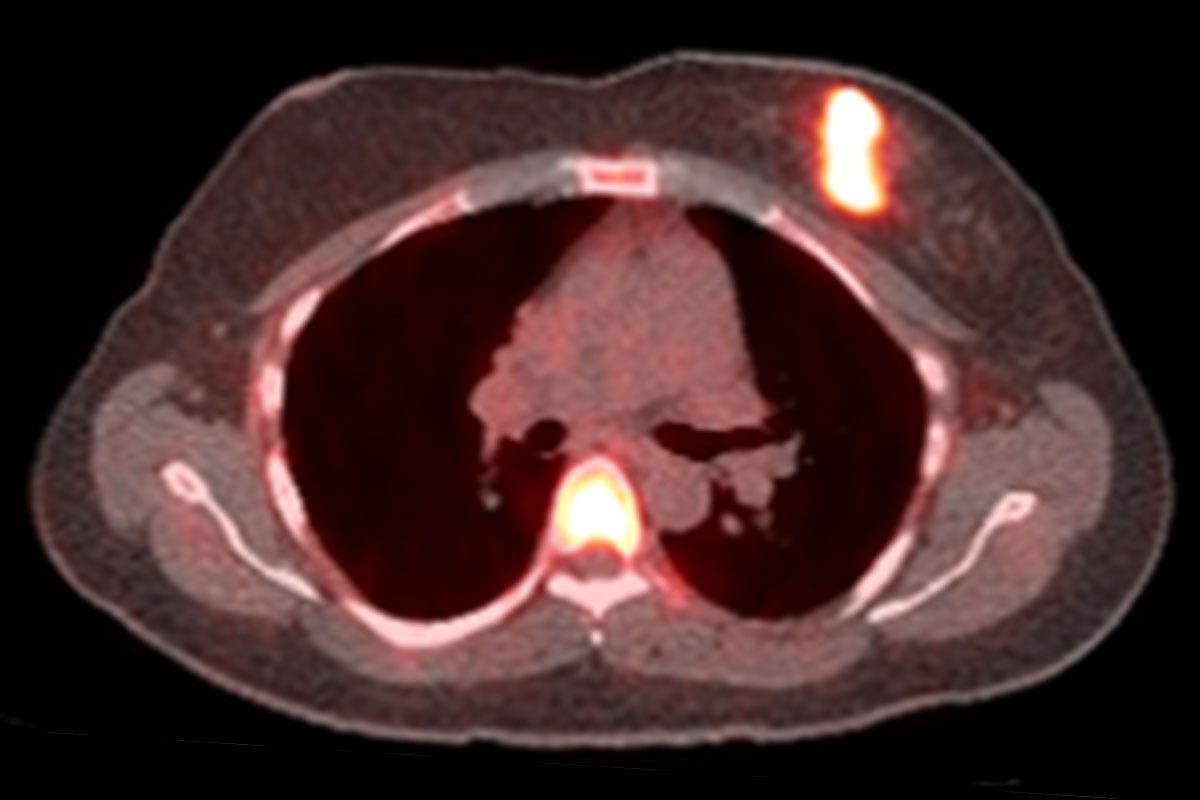 Bright spots indicate that cancer cells have responded to a one-day challenge with estrogen in this positron emission tomography (PET) scan of a woman with breast cancer. In a small study, researchers at Washington University School of Medicine in St. Louis found that only women whose tumors responded to estrogen challenge benefited from hormone therapy. The findings could help doctors choose the treatments most likely to help their patients.

Newswise — Hormone therapy commonly is given as a targeted treatment for women whose cancer cells carry receptors for estrogen. But the therapy only works for about half of all patients. Until now, there hasn’t been a good way to reliably predict who will benefit and who will not.

Researchers at Washington University School of Medicine in St. Louis have shown they can distinguish patients likely or unlikely to benefit from hormone therapy using an imaging test that measures the function of the estrogen receptors in their cancer cells. In a small phase 2 clinical trial, the researchers showed that the cancers of all patients with working estrogen receptors remained stable or improved on hormone therapy, and progressed in all women with nonfunctional estrogen receptors. The findings, published Feb. 2 in Nature Communications, could help doctors choose among treatment options and reduce the chances that women would receive a therapy unlikely to help.

“If breast cancer in a patient is estrogen receptor-positive, doctors will usually recommend hormone therapy even though they know it will only work for slightly more than half the patients,” said senior author Farrokh Dehdashti, MD, the Drs. Barry A. and Marilyn J. Siegel Professor of Radiology at Mallinckrodt Institute of Radiology (MIR). “When hormone therapy works, it’s typically quite effective, and it has milder side effects than some other therapies, and that’s why oncologists and patients want to try it first. But we need to narrow down who is likely to benefit, and there really hasn’t been a reliable test to accomplish that.”

Approximately four out of five breast cancers – some 250,000 per year in the United States – are labeled “estrogen receptor-positive,” meaning that the cancer cells carry estrogen receptors and the tumor grows in response to the naturally occurring hormone estrogen. Hormone therapy is designed to stop the effects of estrogen on the tumor.

A variety of drugs can be prescribed as hormone therapy, and doctors choose a treatment regimen depending on the patient and the specifics of that person’s disease. Aromatase inhibitors prevent the body from making estrogen and are usually the first treatment chosen for hormone therapy. Fulvestrant blocks the estrogen receptor on cancer cells. These drugs usually are given to postmenopausal women. Pre-menopausal women often are given different hormone therapies because their ovaries still are producing large amounts of estrogen.

Doctors have long suspected that the difference between women who respond to hormone therapy and those who don’t comes down to whether the estrogen receptors on their cancer cells are working properly. If the receptors are present but nonfunctional, targeting them is unlikely to have much effect.

The researchers recruited 43 postmenopausal women with estrogen receptor-positive breast cancer. Most (86%) had metastatic disease, while 14% had locally advanced or locally recurrent disease. The majority (72%) already had received some form of treatment before the start of the study. Their prior treatment was most often a hormone therapy-based regimen.

The women underwent a PET scan using FFNP, followed by three doses of estrogen over a 24-hour period, and then a second PET scan a day after the estrogen treatment.

“The goal of therapy is to control or improve disease, so if the therapy is likely to be ineffective, it should not be given to a patient,” said Dehdashti, who is also senior vice chair and division director of nuclear medicine at MIR. “We observed 100% agreement between the response to estrogen challenge and the response to hormone therapy, even though the participants were on a variety of treatment regimens. This method should work for any therapy that depends on a functional estrogen receptor, and it could provide valuable information to oncologists deciding how best to treat their patients.”

The researchers are now in the process of setting up a larger phase 2 clinical trial with collaborators at other institutions to verify their results.