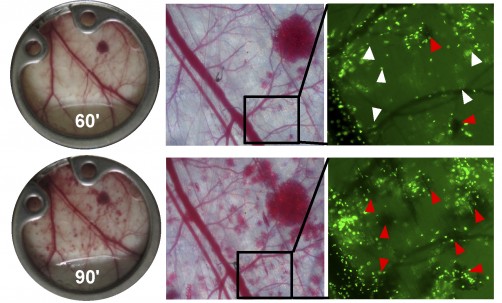 Newswise — Immune cells that creep across blood vessels trigger potentially fatal bleeding in platelet-deficient mice, according to a report published in The Journal of Experimental Medicine. If the same is true in humans, blocking the passage of these cells could prevent dangerous complications in patients undergoing transplants or chemotherapy.

Bone marrow transplantation and chemotherapy are known to deplete blood-clotting cells called platelets, resulting in potentially fatal bleeding (hemorrhage) in some patients. Previous studies showed that inflammation was required for bleeding complications to develop in these patients, but exactly what kicks off the process was unknown.

Scientists in Germany have now identified the bloody culprit as immune cells called neutrophils. Neutrophils are best known as first-responder cells that are called to sites of infection to engulf and destroy invading microbes. But this salutary function is not without consequences, as several microbe-busting products released by activated neutrophils also result in collateral damage to tissue and blood vessels.

And when platelet levels are low, the study suggests, the simple act of crawling out of blood vessels is enough for neutrophils to trigger bleeding complications in mice. When they blocked or removed proteins required for neutrophils to traverse the protective endothelial layer of blood vessels, bleeding was prevented. Similarly, in humans, UV-induced skin bleeding was worse in patients with low platelet counts, hinting at the potential therapeutic benefit of blocking neutrophils’ cross-vessel journey.

Research reported in the press release was supported by the Interdisciplinary Center for Clinical Research (IZKF), Deutsche Forschungsgemeinschaft , the Cells-in-Motion Cluster of Excellence (University of Munster), and by the DHU FIRE, USPC, and CORDDIM.