The bitter taste of illness 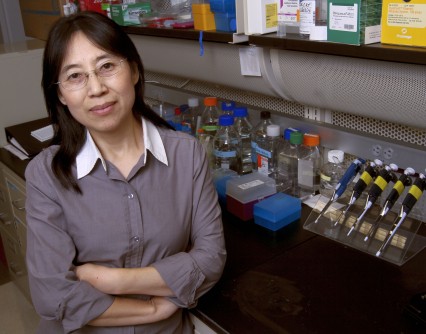 In addition to its role in mediating inflammation, TNF has been implicated in the progression of varied diseases ranging from Alzheimer’s disease to cancer.

“Reduced food intake and associated malnutrition is a significant concern that affects the long-term prognosis of many people who are very ill,” said senior author Hong Wang, PhD, a molecular biologist at Monell. “Our findings reveal that bitter taste is regulated by the immune system. Specifically, TNF may make sick people more sensitive to bitterness so that foods taste more bitter and less appetizing.”

Wang’s research focuses on interactions between the taste and immune systems, with the goal of identifying how taste cell function changes in disease states. As part of this effort, previous research from her laboratory had demonstrated that taste buds contain several immune system proteins, including TNF.

Because TNF is known to suppress food intake, the current study asked whether TNF affects food intake via the taste system. The findings are published online ahead of print in the journal Brain, Behavior, and Immunity.

To examine whether TNF helps regulate taste responses, the researchers first compared taste responses of normal mice to those of mice engineered to be lacking the gene for TNF (TNF knockout mice).

Two different behavioral tests revealed that the TNF knockout mice were less sensitive to bitter-tasting compounds, meaning that they required higher levels of bitterness than normal mice in order to show a response. However, there were no differences in how the two sets of mice responded to sweet, umami, salty, and sour tastes.

To confirm that the behavioral tests reflect a change in taste sensing on the tongue rather than how taste is processed in the brain, the researchers next measured how the chorda tympani nerve, which transmits taste information from the front of the tongue to the brain, responded to the different tastes. They found that taste nerves from TNF knockout mice showed less activity in response to bitter taste compounds than nerves from normal mice. Again, the response was specific to bitter, with no differences in neural responses to the other taste qualities.

The combined findings indicate a deficit in the ability of the TNF-knockout mice to sense bitter taste. This suggests that TNF regulates bitter taste in normal mice and that elevated TNF levels associated with infection or inflammation may cause foods to taste more bitter.

“I was often sick as a child and still remember the bitter taste in my mouth when I was ill. Because of this, understanding how illness makes foods taste bitter is interesting to me personally,” said Wang.

A third study in normal mice revealed that receptors for TNF are located on several types of taste sensing cells within the taste bud, including the cells that contain receptors for bitter taste. This expression pattern suggests that TNF interacts with TNF receptors on bitter taste cells to directly influence how these cells respond to taste stimuli.

“This new research establishes a functional link between the immune and taste systems,” said Wang. “An interesting question to consider is whether changing the levels of TNF, perhaps by using inhibitors, can modulate bitter taste sensations.”

Other studies will explore how TNF acts on taste cells to regulate bitter taste and whether other inflammatory factors interact with the taste system.

Monell molecular biologist Pu Feng and electrophysiologist Masafumi Jotaki are the paper’s co-first authors. Also contributing to the research were Monell scientists Agnes Kim, Jinghua Chai, Nirvine Simon, Minliang Zhou, Alexander Bachmanov, and Liquan Huang. Funding was provided by the Institute of Deafness and Other Communication Disorders (grants R01DC010012, R21DC013177, R01DC00882, and P30DC011735) of the National Institutes of Health and by National Science Foundation grant DBJ-0216310. The content is solely the responsibility of the authors and does not necessarily represent the official views of the National Institutes of Health or the National Science Foundation.

The Monell Chemical Senses Center is an independent nonprofit basic research institute based in Philadelphia, Pennsylvania. For almost 50 years, Monell has advanced scientific understanding of the mechanisms and functions of taste and smell to benefit human health and well-being. Using an interdisciplinary approach, scientists collaborate in the programmatic areas of sensation and perception; neuroscience and molecular biology; environmental and occupational health; nutrition and appetite; health and well-being; development, aging and regeneration; and chemical ecology and communication. For more information about Monell, visit www.monell.org.