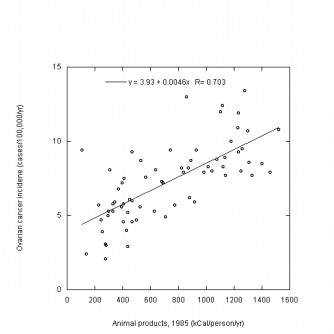 Ovarian cancer incidence rates in 2008 vs. animal product supply in 1985

Newswise — A multicountry study just published in Nutrients finds that smoking, diets rich in animal products, and alcohol have the strongest correlations with cancer incidence rates. The cancer incidence rates are from 2008 as assembled by the International Agency for Research on Cancer of the World Health Organization.

This study is an ecological study in which incidence rates for the various types of cancer for males and females from 87 countries with high quality cancer incidence rate data as well as all 157 countries with cancer incidence rate data were compared statistically with indices for various risk modifying factors. Dietary supply data were obtained from the Food and Agriculture Organization of the United Nations. Data for various periods back to 1980 were included since there is generally a lag of up to 20 years between dietary changes and peak cancer rates. The animal products index includes meat, milk, fish, and eggs. Lung cancer incidence rates were used as an index for the effects of smoking and air pollution. This index integrates the effect of all factors contributing to lung cancer and other cancers linked to lifetime smoking and is a much better index than a snapshot of smoking rates. Latitude was used as an index of solar ultraviolet-B irradiance and vitamin D production.

For the 87 countries with high quality cancer data, the smoking and animal products indices explained over half of the cancer incidence rates, with alcoholic beverage supply explaining a smaller amount. For males, the smoking index was twice as important as the animal product index, while for females, the animal product index was twice as important. These two factors explained 70% of the variation in all cancer less lung cancer rates between countries. The range for these cancers for males extends from 75 to 300 cases/100,000/year, while that for females extends from 80 to 260 cases/100,000/year.

The results for some specific cancers are interesting.

The types of cancer for which animal products had the strongest correlation include female breast, corpus uteri, kidney, ovarian, pancreatic, prostate, testicular, thyroid cancer, and multiple myeloma. The reason why animal products increase the risk of cancer is most likely since animal products promote growth of the body as well as tumors through production of insulin-like growth factor-I (IGF-I). For example, older Japanese are generally shorter than Westerners while younger Japanese are about as tall as Westerners. The traditional Japanese diet derived 10% of its calories from animal products, primarily seafood. Japan has made the nutritional transition to the Western diet, with 20% of the calories derived from animal products. Rates of cancer types common in Western countries rose considerably in Japan during the past 20-30 years.

The findings regarding animal products extend the results reported earlier. For example, in 1907 a study reported in the New York Times reported that cancer rates were much higher among people in ethnic groups such as Germans, Irish, Scandinavians, and Slavonians, who were considered meat eaters, while cancer rates were lowest for Italians and Chinese, who were practically vegetarians:Cancer Increasing among Meat Eaters. New York Times, Sep 24, 1907. http://query.nytimes.com/gst/abstract.html?res=9502E1D81331E733A25757C2A96F9C946697D6CF (accessed 24 December 2013)

The present study also extends this classic study, which was largely ignored until a few years ago when observational studies on younger women found that meat was a risk factor for breast cancer.

Observational studies in Uruguay by Eduardo De Stefani and his group have reported meat consumption as an important risk factor for several types of cancer. The papers can be accessed through pubmed.gov.

Commenting on this study, Neal Barnard, M.D., President of the Physicians Committee and on the faculty of the George Washington University School of Medicine, said "This is an important study showing strong relationships between meaty diets and cancer risk. There's a clear-cut lesson there for national food policies."

Mark McCarty, Research Director of the non-profit Catalytic Longevity, said “This compelling new study clarifies the over-riding impact of smoking and animal product consumption as environmental determinants of global cancer risk. In fact, it’s the most impressive evidence I’ve yet encountered indicting animal products per se as a major cancer risk factor. It’s notable that animal fat consumption did not correlate nearly as tightly with risk as total animal calories; that’s likely because other factors such as high-quality protein, heme iron, mutagens derived from cooked flesh, and possibly bioavailable phosphorus contribute to the impact of dietary animal products on cancer risk. It’s quite fortunate that smoking and animal product consumption are lifestyle choices within our personal control.”

Alcoholic beverage supply was found significantly correlated with only one type of cancer, colorectal.

Lung cancer was associated with animal fat supply in addition to cigarette supply. This finding is consistent with studies from 20-30 years ago noting that although smoking rates in Japan and the United States were similar, lung cancer rates were much higher in the United States.

For several cancers, latitude was significantly correlated with incidence rates: bladder, brain, colorectal (females), Hodgkin’s lymphoma, kidney, and melanoma. Latitude is assumed to be an index of solar ultraviolet-B doses and vitamin D production, and both have been found associated with reduced cancer incidence and/or mortality rates in many studies. See, for example,Moukayed M, Grant WB. Molecular link between vitamin D and cancer prevention. Nutrients. 2013;5(10):3993-4023.However, the correlation of latitude with melanoma rates is more likely due to variations in skin pigmentation; darker skin pigmentation reduces the penetration of UV to the deeper layers of the skin where it can cause melanoma.