This video shows dynamic focusing onto a moving target inside scattering media. 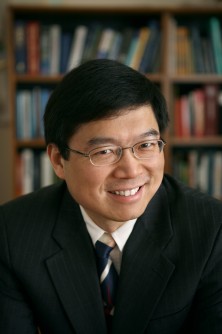 Newswise — As a child, it was fascinating to put a flashlight up to our palms to see the light shine through the hand. Washington University in St. Louis engineers are using a similar idea to track movement inside the body’s tissues to improve imaging of cancerous tissues and to develop potential treatments.

Lihong Wang, PhD, the Gene K. Beare Distinguished Professor of Biomedical Engineering at the School of Engineering & Applied Science is applying a novel time-reversal technology that allows researchers to better focus light in tissue, such as muscles and organs.

Current high-resolution optical imaging technology allows researchers to see about 1 millimeter deep into the body. Beyond that, the light scatters and obscures the features, which is why we can’t see bones or tissue in the hand with a flashlight. To overcome this, Wang and his lab developed photoacoustic imaging, which combines light with acoustic waves, or sound, to form a sharper image, even several centimeters into the skin.

In new research published Nov. 2 in Nature Photonics Advance Online Edition, Wang is now using a new technology called time-reversed adapted-perturbation (TRAP) optical focusing, which sends guiding light into tissue to seek movement. The light that has traversed stationary tissue appears differently than light that has moved through something moving, such as blood. By taking two successive images, they can subtract the light through stationary tissue, retaining only the scattered light due to motion. Then, they send that light back to its original source via a process called time-reversal so that it becomes focused once back in the tissue.

“This can potentially be used in imaging or therapy,” Wang says. “For example, focusing pulsed light on port wine stains, which are excessive growth of blood vessels, could remove the stains without damaging the surrounding normal skin.”

In 2011, Wang’s lab was the first to use ultrasound focusing to provide a virtual, non-invasive internal guide star that allowed them to focus on anything moving in tissue. But TRAP focusing is much more efficient in tracking moving targets, Wang says in the new research. TRAP focusing can enhance and contrast by redistributing and concentrating light on the targets, allowing for images to be taken from greater depths.

Wang, an internationally renowned expert in photoacoustic imaging, is or has been principal investigator on 37 research grants with a cumulative budget of $47 million. Most recently, he received a prestigious three-year, $2.7 million BRAIN Initiative Award from the National Institutes of Health and the 2015 Britton Chance Biomedical Optics Award from SPIE for his pioneering technical contributions and visionary leadership in the development and application of photoacoustic tomography, photoacoustic microscopy and photon transport modeling. He also has received the NIH FIRST and the NIH Director’s Pioneer awards as well as the National Science Foundation CAREER Award.

The School of Engineering & Applied Science at Washington University in St. Louis focuses intellectual efforts through a new convergence paradigm and builds on strengths, particularly as applied to medicine and health, energy and environment, entrepreneurship and security. With 91 tenured/tenure-track and 40 additional full-time faculty, 1,300 undergraduate students, more than 900 graduate students and more than 23,000 alumni, we are working to leverage our partnerships with academic and industry partners — across disciplines and across the world — to contribute to solving the greatest global challenges of the 21st century.

Funding for this research was provided by the National Institutes of Health grants DP1 EB016986 and R01 CA186567.