Improving the Biodiversity of Green Roofs 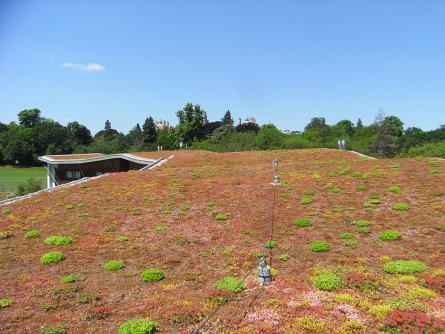 An extensive green roof in the grounds of Royal Holloway, University of London 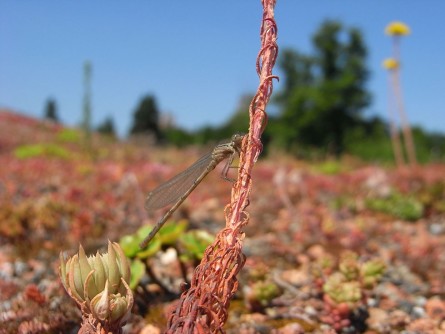 A damselfly on a green roof in the grounds of Royal Holloway, University of London 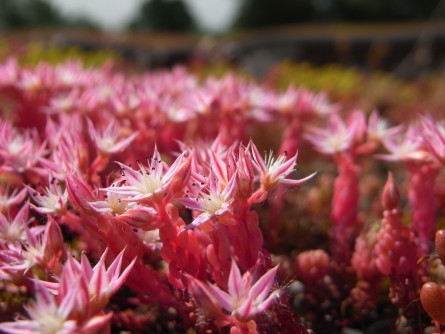 Sedum growing on an extensive green roof in the grounds of Royal Holloway, University of London

Newswise — Using living organisms such as bacteria or fungi, as an alternative to chemical fertilisers, can improve the soil biodiversity of green roofs, according to new research from the University of Portsmouth.

Green roofs are covered with plants and vegetation and are increasingly used in cities to make buildings more energy efficient and environmentally friendly. However, high winds, prolonged UV exposure and unpredictable water availability mean that many green roofs lack nutrients, which can limit plant growth and the biodiversity of soil organisms, which are responsible for the quality of nutrients in the soil.

This could have implications for the environmental and economic benefits of green roofs.

The study, published in the journal Ecological Engineering, found that the addition of certain types of microbial inoculants (plant growth-promoting bacteria and fungi used as an alternative to chemical fertlisers), in particular a fungi called Trichoderma , produced higher populations of tiny insects called springtails (which range from 0.25 to 6mm in size). While these changes improved the abundance of springtails, they did not result in a positive effect on plant growth.

Lead author Dr Heather Rumble, Senior Lecturer in Environmental Geography at the University of Portsmouth, said: “Few studies have investigated whether green roofs are a good urban habitat, particularly for soil organisms. We think that mature extensive green roofs have an established microbial community that may limit the success of commercial inoculants.

“The premise of our research was that as the soil food chain is lacking, we could try to boost it artificially. We wanted to identify the microbial inoculants that could improve biodiversity on green roofs that already exist and to better understand how healthy rooftop ecosystems sustain themselves.”

In the field experiment, the researchers used an old green roof in Egham, outer London, and added living soil organisms including the fungi Trichoderma, mycorrhizal fungi and soil bacteria, which form the base of a food chain. Over a year, they found that some microbial inoculants were more successful at improving the soil food chain than others, with Trichoderma in particular having a positive effect on the populations of species higher up the food chain, such as springtails.

Dr Rumble added: “While we didn’t see the same effect on plant growth, this enhanced biodiversity gives us a clue as to some more specific additions we could try in the future. This information may help us to identify which types of soil microbes to use on our green roofs, so we can maximise soil biodiversity and improve plant survival.”

The study was funded by the Natural Environmental Research Council, Symbio Ltd and Laverstoke Park. Professor Alan Gange from Royal Holloway, University of London is a co-author.