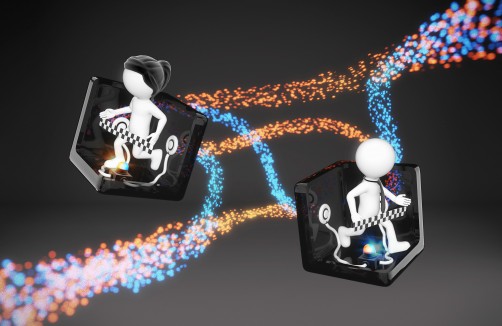 Newswise — When describing nature using physical laws, scientists often start from everyday experiences. However, our usual intuition does not apply to the quantum world. Physicists have recently realized that quantum theory even forces us to question innate concepts, such as the order in which things occur. Imagine, for example, a race between two friends, Alice and Bob. In everyday life, the winner is the first to cross the finish line. Thus, common sense says that either Alice wins, Bob wins, or they tie. This reasoning, however, is not always applicable in the quantum world. In fact, quantum mechanics allows each runner to win and lose in one race: Alice could reach the finish line both before and after Bob in quantum superposition. However, even if we held such a quantum race, how could we verify that both racers won in superposition? Part of the problem is that quantum mechanics says when we observe the race it "collapses". This means that we only see either Alice win or lose the race: we can’t see the superposition.

Witnessing scrambled orders of operationsA group of physicists led by Philip Walther at the University of Vienna have implemented a new measurement, called a "causal witness", which allows them to watch Alice win and lose at the same time. This exciting measurement technique was designed by Caslav Brukner’s theory group at the Austrian Academy of Sciences. Formally, a causal witness is a mathematical tool to determine whether it is possible to describe an experiment without having to resort to superimposed orders. Using this new tool, the physicists could do more than simply see Alice win and lose in superposition: they were able to quantify the degree to which the two situations actually were superimposed.

To implement the causal witness, the physicists needed to devise a scheme which allowed them to extract information from inside of a highly-fragile quantum process without destroying it. To do so, they used another quantum system to essentially raise a flag when the photon passed by one of the quantum operations. Although this could have still collapsed the system, the physicists found a new trick to measure the additional quantum system while keeping the superposition intact. Their new technique allowed them to only extract information about the overall superposition, and not about the order of operations. From those measurement results they confirmed that the photons really had passed through both quantum operations in two orders at the same time.

Future implications The fact that the order of quantum operations can be put in quantum superposition opens up a new playground for studies in quantum mechanics. On the theoretical side, this is already indicated by a large number of studies and proposals about the role of "causal relations" within quantum mechanics. However, translating these proposals into laboratory experiments is challenging. "Our experimental demonstration is a meaningful step forward in this area, since it demonstrates how to extract information inside these processes without disturbing their quantum nature", says Giulia Rubino, lead author of the study.

The group’s next goal is to exploit new technological advances to create superpositions of more complex processes. This will allow them to gain deeper insights into the interplay between causal relations and quantum mechanics. Furthermore, it presents an interesting new route to optimize tasks even beyond what is possible using standard quantum computers with a fixed order of operations.