In Cells, Some Oxidants Are Needed

Reactive oxygen molecules cause damage in diabetes and many other illnesses—but also can warn cells to defend themselves. 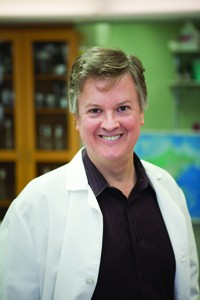 Keith Blackwell, M.D., Ph.D., Associate Research Director and co-head of the Section on Islet Cell and Regenerative Biology at Joslin Diabetes Center and Professor of Genetics at Harvard Medical School.

Newswise — BOSTON – (August 18, 2016) – Within our bodies, high levels of reactive forms of oxygen can damage proteins and contribute to diabetic complications and many other diseases. But some studies are showing that these reactive oxygen species (ROS) molecules sometimes can aid in maintaining health—findings now boosted by a surprising discovery from Joslin Diabetes Center researchers.

Led by Keith Blackwell, M.D., Ph.D., Associate Research Director and co-head of the Section on Islet Cell and Regenerative Biology at Joslin Diabetes Center and Professor of Genetics at Harvard Medical School, the scientists studied a protein known as IRE-1 in the outer membrane of the endoplasmic reticulum (ER), an “organelle” in the cell that synthesizes proteins such as insulin. IRE-1 stands guard over the ER, triggering alerts when these synthesized proteins are misfolded and thus allowing cells to take corrective measurements.

The Joslin scientists discovered that this membrane protein also can react to ROS molecules surrounding the ER, kicking off an antioxidant response that increases the cell’s resistance to stress.

“It’s surprising to see the same molecular sensor doing two different things, like a combination smoke/carbon monoxide alarm,” says Dr. Blackwell, senior author on a paper published today in the Molecular Cell journal and Professor of Genetics at Harvard Medical School. “A major sensor of misfolded proteins in the ER turns out to be a major sensor of ROS, acting in a completely different molecular pathway with a completely different function.”

The discovery highlights the need to consider ROS molecules not just as protein-wrecking machines but as links in the chains of cell pathways, Dr. Blackwell says.

“It’s clear that at high levels, ROS molecules can damage proteins, promoting aging and worsening disease states,” he says. “But over the past several years, there’s been a growing body of evidence that there are also ROS molecules that appear to be physiologically normal and act as normal cell signals.”

The Joslin team studied IRE-1 first in the cells of the simple nematode C. elegans and then in human cells, where the molecular pathway works in essentially the same way.

“IRE-1 really has two faces,” Dr. Blackwell says. “On the one hand, it senses misfolded proteins inside the ER, and it turns on a corrective mechanism called the unfolded protein response (UPR). On the other hand, when IRE-1 gets a signal from ROS molecules outside the ER, it shuts off the UPR response and turns on an antioxidant response. Also surprisingly, this functional switch is mediated by a single oxygen molecule, which attaches to a single amino acid at a very critical place in IRE-1—and this relatively subtle alteration has a dramatic effect.”

As Dr. Blackwell notes, high levels of ROS molecules are associated with diabetic complications. It’s possible that these molecules worsen complications not only by catastrophically damaging proteins but by obstructing normal gene regulatory pathways, he suggests.

Another potential key action for IRE-1 in diabetes arises in pancreatic beta cells. These cells synthesize insulin in the ER, and the ER may be placed under stress if it produces high level of the hormone while trying to handle insulin resistance or a type 1 diabetes autoimmune attack. “Beta cells then would rely on IRE-1 to protect the ER, and this could have a negative effect on antioxidant defenses,” Dr. Blackwell says.

His lab is probing deeper into IRE-1’s ROS and ER pathways, and studying how they might eventually be targeted to improve treatments. Among their work, the investigators are looking at how ROS affects gene regulatory responses in cells that are exposed to elevated glucose levels or other stimuli.

As Dr. Blackwell points out, the Joslin study also sounds a cautionary note for people who take antioxidants in the hope of protecting themselves against damage from ROS.

“In clinical trials, therapies with antioxidants have been pretty much a bust, and it’s not entirely clear why,” he says. “But blindly consuming large doses of antioxidants is probably not the best idea, because while your intent would be to protect yourself from damage, you’re also potentially interfering with normal ROS signals that are helpful and important.”

Lead author on the paper was John Hourihan. Lorenza Moronetti Mazzeo and L. Paulette Fernández-Cárdenas, also of Joslin, were co-authors. Lead funding was provided by the National Institutes of Health.