4-Sep-2014 2:15 PM EDT, by University of Wisconsin-Madison more news from this source 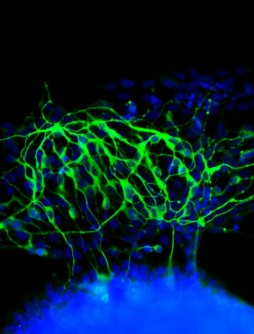 When blank slate stem cells are exposed to a soft as opposed to a hard surface on which to grow, they begin to transform themselves into neurons, the large, complex cells of the central nervous system. Absent any soluble factors to direct cell differentiation, surface matters, according to new research from the lab of University of Wisconsin-Madison chemist and biochemist Laura Kiessling.

Newswise — MADISON, Wis. — Figuring out how blank slate stem cells decide which kind of cell they want to be when they grow up — a muscle cell, a bone cell, a neuron — has been no small task for science.

Human pluripotent stem cells, the undifferentiated cells that have the potential to become any of the 220 types of cells in the body, are influenced in the lab dish by the cocktail of chemical factors and proteins upon which they are grown and nurtured. Depending on the combination of factors used in a culture, the cells can be coaxed to become specific types of cells.

Now, in a new study published today, Sept. 8, in the Proceedings of the National Academy of Sciences, a team of researchers from the University of Wisconsin-Madison has added a new wrinkle to the cell differentiation equation, showing that the stiffness of the surfaces on which stem cells are grown can exert a profound influence on cell fate.

“To derive lineages, people use soluble growth factors to get the cells to differentiate,” explains Laura Kiessling, a UW-Madison professor of chemistry and biochemistry and stem cell expert.

Past work, she notes, hinted that the qualities of the surface on which a cell lands could exert an influence on cell fate, but the idea was never fully explored in the context of human pluripotent stem cell differentiation.

In the lab, stem cells are grown in plastic dishes coated with a gel that contains as many as 1,800 different proteins. Different factors can be introduced to obtain certain types of cells. But even in the absence of introduced chemical or protein cues, the cells are always working to differentiate — but in seemingly random, undirected ways.

The Wisconsin group, directed by Kiessling and led by chemistry graduate student Samira Musah, decided to test the idea that the hardness of a surface can make a difference. After all, in a living body, cells seek different niches with different qualities and transform themselves accordingly.

“Many cell types grow on a surface. If a cell is near bone, the environment has certain features,” says Kiessling, whose group — collaborating with UW-Madison colleagues Sean Palecek, Qiang Chang and William Murphy — has been working to produce precise, chemically defined surfaces on which to grow stem cells. “A cell will react differently if it lands near soft tissue like the brain.”

To fully explore the idea that surface matters to a stem cell, Kiessling’s group created gels of different hardness to mimic muscle, liver and brain tissues. The study sought to test whether the surface alone, absent any added soluble factors to influence cell fate decisions, can have an effect on differentiation.

Results, according to Kiessling, showed that a soft, brain tissue-like surface, independent of any soluble factors, was catalyst enough to direct cells to become neurons, the large elaborate cells that make up the central nervous system. Stiffer surfaces favored the stem cell state.

“We didn’t change anything but switch from a hard surface to a soft surface,” Kiessling says. “They all started looking like neurons. It was stunning to me that the surface had such a profound effect.”

In the case of the soft, brain-like surface, the Wisconsin researchers believe that the mechanical properties of a surface are influencing a protein called YAP. YAP can be found in the cytoplasm but also the nucleus of a cell, and when it is in the nucleus, YAP regulates gene expression. According to the study results, YAP is excluded from the nucleus on the soft gels, and its depletion there helps drive the stem cells onto a brain cell developmental pathway.

The finding, that the simple mechanical properties of a surface can play a big role in helping stem cells decide what to be, promises to help scientists better define the experimental conditions to direct stem cell fate. It may also ultimately inform the methods that will be used for producing large quantities of cells for therapeutic use and other applications such as the high-throughput screening of chemicals for brain toxicity or therapeutics.