Unlikely heroes often emerge in disasters, and the same is true on social media, research says 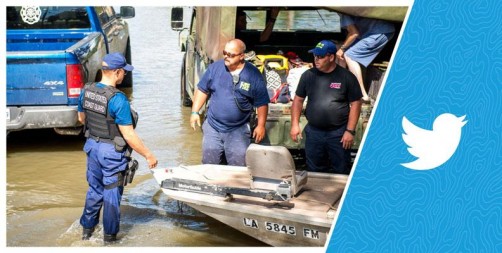 A U.S. Coast Guard Flood Response team coordinates with the Louisiana Fire Department and other local officials helping to evacuate citizens from the major flooding that caused damage across Louisiana in 2016. A first-of-its-kind study on Twitter use during 5 of the costliest U.S. natural disasters offers potentially life-saving insights. The research finds that Twitter users with small networks (100-200 followers) increase activity more than those with larger networks in these situations. It also finds that each disaster type (hurricanes, tornadoes, floods) has a unique pattern of social media use. The results have important implications for government and organizations responsible for emergency preparations.

Newswise — New research on Twitter use during natural disasters offers potentially life-saving data about how information is disseminated in emergency situations, and by whom.

The University of Vermont study is the first to look at social media patterns across different disaster types (hurricanes, floods and tornadoes), focusing on five of the decade’s costliest U.S. emergencies.

The study highlights two key findings: First, on average, Twitter users with small local networks (with 100-200 followers) increase their activity more than those with larger networks in these emergency situations. Second, each type of natural disaster studied possessed its very own unique pattern of social media use.

The findings, published in the journal PLOS ONE, have important implications for organizations responsible for communicating vital information around emergencies, particularly as natural hazards increase in incidence and cost, a trend expected to continue with climate change.

“In planning for natural hazards and disasters, thinking about when and what to tweet really does matter,” says lead author Meredith Niles of UVM’s Gund Institute for Environment and College of Agriculture and Life Sciences. “We show that social media use differs markedly depending on emergency type, and these insights can help with emergency planning, where effective communications can be a matter of life and death.”

Power of the people

Despite the importance placed on celebrity social media influencers with millions of followers, in natural disasters average Twitter users – those with 100 to 200 followers – were found to be more active disseminators of useful information.

“While these users have fewer followers than so-called influencers, their followers tend to have a higher proportion of friends and family, close networks that are more likely to seek and exchange useful information in emergency situations.”

Instead of relying on high-profile social media influencers to help spread important information, the study suggests efforts should be concentrated on targeting average users with meaningful networks, with compelling, accurate messages that average people will feel compelled to share in the “social wild online.”

Researchers found key differences in tweet timing and volume, depending on disaster type. For hurricanes, people tweeted more frequently about emergency topics before the event, while for tornadoes and floods, which occur with less warning, Twitter was used for real-time or recovery information.

The study suggests that the importance of Twitter for communicating potentially life-saving information could be maximized by tailoring the timing and content of messages to the emergency type.

“We show that people are much more active on Twitter just before a hurricane, when they know it’s coming and they are preparing,” says Niles, with activity dropping during the actual event. “This suggests that Twitter is most effective as a tool to communicate preparation or evacuation information in advance of hurricanes.”

However, with more unexpected hazards, such as tornadoes and flooding, people were tweeting in real time as the situation unfolds. “ln the case of floods and tornadoes, it appears that people are using Twitter to share critical information about resources in the immediate aftermath and recovery period,” Niles adds.

Given the importance of food and water during natural hazards, the researchers tracked 39 keywords related to emergencies, food security, water and resources and analyzed their frequency and volume increase across Twitter over the two weeks surrounding each disaster.

For example, terms like “groceries”, “supermarket”, and “prepare” were most frequently used before hurricanes whereas terms like “shelter,” “emergency,” “wind” or “food security” were used during and after tornadoes. This suggests that people are communicating about their preparation or recovery in real-time and sharing resources that could assist those seeking help.

The research was conducted under a standing agreement between the University of Vermont and Twitter that allows the university access to the Decahose (a random stream of 10 per cent of all public tweets made).