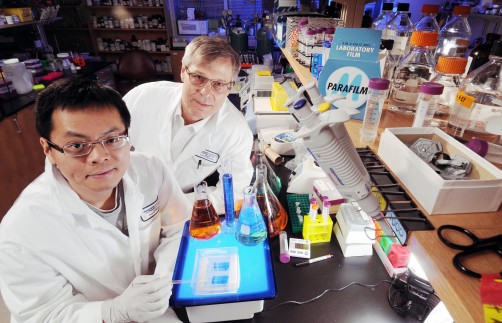 Georgia Tech School of Chemistry and Biochemistry postdoctoral fellow Chiaolong Hsiao (left) and professor Loren Williams examine on a light box a polyacrylamide gel surrounded by an iron solution to determine whether RNA is stable in the iron solution. 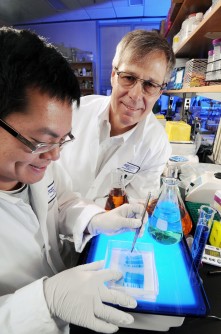 Georgia Tech School of Chemistry and Biochemistry postdoctoral fellow Chiaolong Hsiao (left) and professor Loren Williams examine on a light box a polyacrylamide gel surrounded by an iron solution to determine whether RNA is stable in the iron solution.

Newswise — A new study shows how complex biochemical transformations may have been possible under conditions that existed when life began on the early Earth.

The study shows that RNA is capable of catalyzing electron transfer under conditions similar to those of the early Earth. Because electron transfer, the moving of an electron from one chemical species to another, is involved in many biological processes – including photosynthesis, respiration and the reduction of RNA to DNA – the study’s findings suggest that complex biochemical transformations may have been possible when life began.

There is considerable evidence that the evolution of life passed through an early stage when RNA played a more central role, before DNA and coded proteins appeared. During that time, more than 3 billion years ago, the environment lacked oxygen but had an abundance of soluble iron.

“Our study shows that when RNA teams up with iron in an oxygen-free environment, RNA displays the powerful ability to catalyze single electron transfer, a process involved in the most sophisticated biochemistry, yet previously uncharacterized for RNA,” said Loren Williams, a professor in the School of Chemistry and Biochemistry at the Georgia Institute of Technology.

The results of the study were scheduled to be published online on May 19, 2013, in the journal Nature Chemistry. The study was sponsored by the NASA Astrobiology Institute, which established the Center for Ribosomal Origins and Evolution (Ribo Evo) at Georgia Tech.

Free oxygen gas was almost nonexistent in the Earth’s atmosphere more than 3 billion years ago. When free oxygen began entering the environment as a product of photosynthesis, it turned the earth’s iron to rust, forming massive banded iron formations that are still mined today. The free oxygen produced by advanced organisms caused iron to be toxic, even though it was – and still is – a requirement for life. Williams believes the environmental transition caused a slow shift from the use of iron to magnesium for RNA binding, folding and catalysis.

“Our findings suggest that the catalytic competence of RNA may have been greater in early Earth conditions than in present conditions, and our experiments may have revived a latent function of RNA,” added Williams, who is also director of the RiboEvo Center.

This new study expands on research published in May 2012 in the journal PLoS ONE. In the previous work, Williams led a team that used experiments and numerical calculations to show that iron, in the absence of oxygen, could substitute for magnesium in RNA binding, folding and catalysis. The researchers found that RNA’s shape and folding structure remained the same and its functional activity increased when magnesium was replaced by iron in an oxygen-free environment.

In future studies, the researchers plan to investigate whether other unique functions may have been conferred on RNA through interaction with a variety of metals available on the early Earth.

This work was supported by NASA (Award No. NNA09DA78A). The content is solely the responsibility of the principal investigators and does not necessarily represent the official views of NASA.