On trip to Seoul and Beijing, Schapiro predicts key factors that will be in play globally for universities 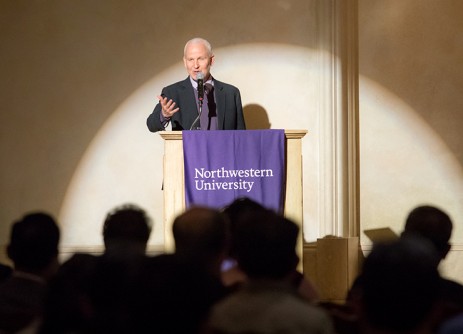 Newswise — EVANSTON - Northwestern University President Morton Schapiro told a global forum in Seoul, South Korea, that the critical skill for students to acquire in higher education in this technological era is “the ability to educate yourself for a lifetime.”

On a wide-ranging trip visiting Northwestern alumni and global leaders in Korea, as well as University supporters and high school students in China, the president told a conference on international talent and prosperity in Seoul his predictions for the future of higher education across the globe.

“The most important thing we want from our students--because this is what we need in the changing and flattening, enhanced technological world—is the ability to educate yourself for a lifetime,” the president said in a presentation on Nov. 1. He spoke on a panel at the Global HR Forum 2017 focused on “The 4th Industrial Revolution and the Direction of Higher Education.”

It will take “that nimbleness, that flexibility,” he added, to prepare for a broad, continuing education throughout their lives to deal with the technological and workplace revolution, including new tools like “robotics, nanotechnology and quantum computing.”

Speaking in a plenary session as both a university president and a labor economist, the president underscored the fact that “nobody knows for sure” what all this disruptive technology, changing economies and erasure of borders means for higher education.

However, he emphasized, it likely will take “an increase in interdisciplinary teaching and digital platforms, and access to digital education” to prepare students for a revolution that encompasses everything from artificial intelligence and self-driving cars to 3-D printers.

Before leaving, he observed in an interview with The Korea Times that global students will need to have a broader education training them to be “independent thinkers and innovative entrepreneurs” to handle the changing world and “the revolutions in tech and computers.”

At the Seoul global forum focused on the “Future in Your Hands”--an annual event that has hosted keynoters such as Bill Clinton and Bill Gates, as well as economists, Fed chairmen, global presidents and prime ministers--President Schapiro laid out the importance of research in higher education and underscored the unique role of the United States and schools like Northwestern in that future.

Nodding in his remarks to other leaders, educators and experts at the forum from Australia, Finland, Germany and Korea, the president emphasized how mobile the global student population has become, traveling across borders and oceans to get their education in places like Northwestern.

“We attract students from all over the world,” he said. “Turns out that 23 percent of our students are from outside the U.S. For undergrads, it’s about 11 percent, which is very similar to the Ivy university average. About a third of all our graduate and professional school students come from outside the U.S. Not surprisingly, you’ll see about half of those students are from China. We’re proud to say that about 10 percent come from South Korea, as well. We also, just like any university, have a number of outreaches to the great universities here in South Korea, in business and engineering and the like.”

Overall, the economic role that higher education plays in the United States is just as crucial in supporting this global trend, added the president, a professor of economics in the Weinberg College of Arts and Sciences. “In the U.S, there are 4,600 colleges and universities enrolling 20 million people,” he said.

“And if you add up all our budgets, I mentioned before the annual budget for Northwestern is almost $2.5 billion, the total budgets for all those colleges and universities is $600 billion dollars. That’s 3 percent of all economic output in the United States. When I talk to people in Washington, D.C., about the value of U.S. higher education, I always make that point as well: That we’re not only one of the most important industries, but one of the largest ones, as well.”

Of those 20 million students, he added, 5 percent of them, or 1 million, come from outside the United States, while the U.S. also remains “the world’s largest net exporter of educational services.” Moreover, the president noted, about “50 of the highest rated 100 universities in the world are in the United States. And if you look at the top 50, once again, it’s 25.”

With campuses in Evanston, Chicago and Doha, Qatar, as well as partnerships with universities around the world and a growing focus on international research and scholarship, Northwestern is increasingly expanding its influence internationally.

“Our international trips are designed to raise Northwestern’s visibility and global footprint,” said Grynspan, during the trip. “We do this through speaking engagements at conferences, media interviews, meeting prospective and incoming students, meeting with the presidents and other officials at partner institutions and reconnecting with our alumni, donors and friends of the university.

“The more we connect internationally, the more we can bring the best global talent to Northwestern, keep our international stakeholders engaged and, ultimately, elevate our global reputation and impact,” she added.

In Seoul, the president met with prominent Korean alumni over lunch and later joined an alumni reception, “Celebrate Northwestern in Seoul.” The president met alumni leaders, participated in a panel discussion and spoke at dinner.

In Beijing, President Schapiro met with several Chinese alumni, donors and supporters of the University and exchanged gifts with his hosts. Accompanied by McQuinn, Grynspan and Alex Herrera, executive director of international development, the president also spoke to about 200 high school students in grades 10-12 at the Keystone Academy, and he took their questions afterwards.

An evening dinner event was organized by Northwestern trustee Jianming Yu, who invited a number of alumni to join the group. Also joining was Samuel Stupp, Board of Trustees Professor of Materials Science and Engineering, Chemistry, Medicine and Biomedical Engineering, who was in Beijing lecturing at Tsinghua University.

The Northwestern leaders also shared plans for the Northwestern University Symphony Orchestra’s (NUSO) upcoming concert series in Asia. Approximately 90 Northwestern student musicians will perform in public concerts in Beijing, Shanghai and Hong Kong. The Asia 2018 tour (March 23 to April 1), will give the student musicians a unique opportunity to showcase their talents on the world stage and support the Bienen School of Music’s goal of recruiting promising young musicians from around the globe.

Grynspan, Stupp and Sarah Wagoner, senior associate director of alumni engagement, went on to Taipei, where they met with university supporters and hosted an alumni event attended by 86 people. Grynspan discussed the University’s commitment to global engagement and We Will. The Campaign for Northwestern. Stupp gave a presentation on the impact of the ‘We Will’ campaign on science and engineering at Northwestern and on his work on regenerative nanomedicine.

At the forum in Seoul, President Schapiro used the panel discussion to underscore the debate going on at Northwestern and globally about whether technological innovation will indeed lead to more economic growth and a long-term, positive impact on the job market.

“Two of my colleagues, who happen to be with me in the economics department at Northwestern, were the leading debaters on what the 4th Industrial Revolution is going to do to income mobility, economic growth, labor force changes, and to what higher education needs to do to adapt,” he said.

On one hand, he noted, is Northwestern economist Robert Gordon, Stanley G. Harris professor of social sciences in the Weinberg College of Arts and Sciences and author of “The Rise and Fall of American Growth,” a best-selling book that argues that historically robust growth rates in the American economy cannot be sustained by today’s innovations.

On the other hand, President Schapiro added, is the argument by Joel Mokyr, an economic historian and Robert H. Strotz professor in Weinberg, whose new book, “A Culture of Growth,” examines the origins of growth in the modern economy. Mokyr says the future looks bright, driven by a new age of invention, especially in areas such as computing, robotics, materials and bioengineering.

“He has a different view,” noted the president. “He looks at technology and he says, technology creates jobs, it creates growth. His estimation of the future of the economy is very positive. I don’t know who is going to be right.”

The president said that while it would be comforting to believe there is “a beautiful and clear path for the future, the reality is, it’s very difficult to tell whether technology is going to be labor enhancing or whether it is not.”

Along these lines, the president cited lessons for higher education he learned in writing his most recent book, “Cents and Sensibility: What Economics Can Learn from the Humanities,” co-authored by Gary Saul Morson, Lawrence B. Dumas professor of the arts and humanities and professor of Slavic languages and literatures in Weinberg.

The book argues economics is missing its humanity, and economists must look to the humanities, especially the study of literature, to make their models more realistic, their predictions more accurate and their policies more effective in the real world.

Predictions for the future of education

President Schapiro concluded his remarks on the panel with a discussion of five predictions he makes as a labor economist on what the future may hold for higher education in the context of the 4th Industrial Revolution.