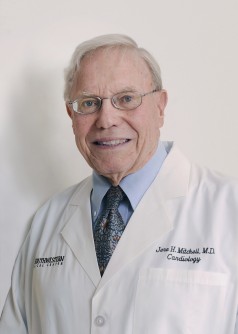 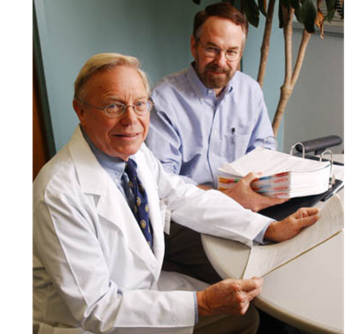 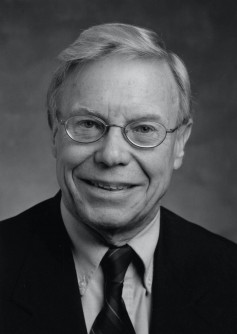 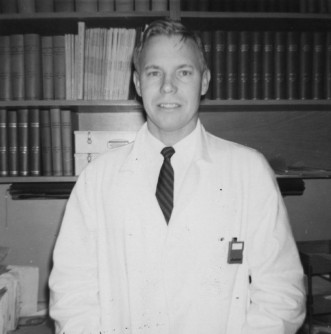 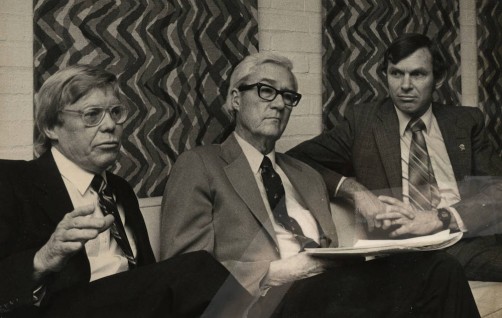 Drs. Jere Mitchell, Carleton Chapman, and Peter Snell, circa 1986 discussing follow up to the Dallas Bed Rest and Training Study, a landmark study in exercise science in which five male college students were confined to bed for three weeks to determine the cardiovascular de-conditioning effects of inactivity on the human body. The experiment was intended to mimic the effects of long-term manned space flight. Endurance training followed the bed rest. In a 1996 update of the Dallas Bed Rest Study, the five original participants were re-tested before and after exercise training.

“Dr. Mitchell provided groundbreaking understanding of the impact of exercise on cardiovascular function and the role of muscles in stimulating the cardiovascular system that have repeatedly overturned traditional thinking and medical practice,” says Daniel K. Podolsky, M.D., president of UT Southwestern Medical Center. “His findings helped lay the foundations for central command physiology and neural controlled circulation and are among the most cited research on the subject, leaving us a lasting legacy in the field of exercise physiology that continues to fuel insight.”

Mitchell, professor of internal medicine and physiology and a UT Southwestern alumnus, conducted research on maximal oxygen uptake that became the foundation of the landmark Dallas Bed Rest and Training Study, which in 1968 found that prolonged bed rest dramatically reduced the heart’s ability to pump blood effectively. The findings, which evolved from initial investigations into oxygen transport during exercise, overturned the common practice at the time of prolonged bed rest after heart attack and instead demonstrated the need to resume activity quickly. They were later applied to recovery after surgery and childbirth and led to head-down tilt bed rest studies and research on the effect of zero gravity on cardiovascular function, which helped establish the field of space physiology.

While working at the National Heart, Lung, and Blood Institute of the National Institutes of Health (NIH), Mitchell conducted research that overturned traditional thinking on differences between mean left atrial pressure and left ventricular end diastolic pressure, which revealed the transport function of the atrium. For this accomplishment, he received the first Young Investigator Award from the American College of Cardiology (ACC). Later at Oxford University, he conducted research on the role of muscles in stimulating the cardiovascular system. This identified what became known as the exercise pressor reflex, which along with research that revealed central command physiology, laid the foundations of neural controlled circulation. In conjunction with this research, Mitchell oversaw one of the longest running NIH program project grants, covering more than four decades.

Mitchell was born in 1928 in Longview, Texas, and graduated with honors in 1950 from Virginia Military Institute before receiving his medical degree from UT Southwestern in 1954. He served his residency and a fellowship at UT Southwestern, along with a fellowship at the Laboratory of Cardiac Energetics for the National Heart, Lung, and Blood Institute in Bethesda, Maryland. He joined the UT Southwestern faculty in 1962 and became the director of the Pauline and Adolph Weinberger Laboratory for Cardiopulmonary Research in 1966 before becoming director of the Harry S. Moss Heart Center in 1976. He also helped establish the Human Performance Center, at the time a joint venture between UT Southwestern and the former St. Paul Medical Center; served on the science advisory board of the U.S. Air Force; was named national vice president of the American Heart Association; served as a Percy Russo lecturer and professor at the Cumberland College of Health Sciences at The University of Sydney in Australia; and received an honorary Doctor of Philosophy from the University of Copenhagen in Denmark.

UT Southwestern, one of the premier academic medical centers in the nation, integrates pioneering biomedical research with exceptional clinical care and education. The institution’s faculty has received six Nobel Prizes, and includes 25 members of the National Academy of Sciences, 16 members of the National Academy of Medicine, and 13 Howard Hughes Medical Institute Investigators. The full-time faculty of more than 2,800 is responsible for groundbreaking medical advances and is committed to translating science-driven research quickly to new clinical treatments. UT Southwestern physicians provide care in about 80 specialties to more than 117,000 hospitalized patients, more than 360,000 emergency room cases, and oversee nearly 3 million outpatient visits a year.