In Recognition of $10M Gift, Temple’s New Library to Be Named for Steve Charles 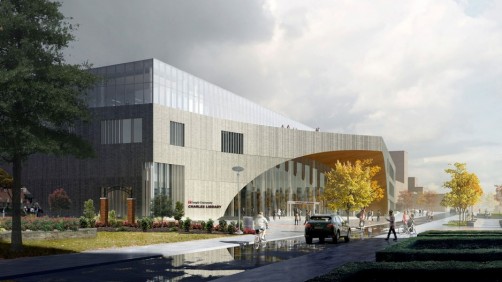 A rendering of the future Charles Library 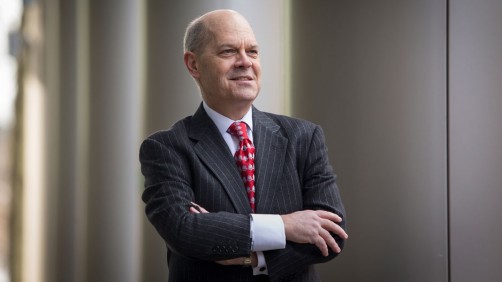 Temple's New Library is on the Rise

Previous Next
Newswise — Temple’s new library—which will become the stunning centerpiece of Main Campus—will be named Charles Library in recognition of a $10 million gift from entrepreneur and university trustee Steve Charles, KLN ’80.
Charles’s gift—one of the largest individual contributions in Temple history—will be invested into an endowment to provide perpetual funding for Temple Libraries to attract and retain high-quality faculty and staff; maintain and enhance Charles Library; promote community outreach, partnerships and public programs; purchase and preserve materials and collections; and support technology and innovation.
“Steve’s gift is transformational in supporting Temple’s goal of building a 21st century library that will redefine campus life, sustain Charles Library at its optimal level and care for all of the valuable resources it will provide,” said Board of Trustees Chair Patrick J. O’Connor, who led the board in formally accepting the gift Tuesday.
There are natural alignments between Charles Library, a strikingly original structure designed by the world-class architectural firm Snøhetta, and the alumnus whose name it will carry. Upon transferring to Temple from Lancaster County, Charles graduated with a degree in advertising and co-founded immixGroup, Inc., which helps technology companies do business with the federal government. He sold the firm in 2015 but still serves as a consultant.
Charles Library, set to open in May 2019, will feature technology such as high-performance computation that supports advanced research. It will also include a space-saving automated book retrieval system that will store most of the library’s volumes and create more space for collaboration.
Located at the intersection of Temple’s two primary pedestrian pathways, Liacouras and Polett walks, the building will be the academic and social core of campus life.
“Charles Library will amplify our scholarly mission by attracting various intellectual communities to a bold new building full of flexible learning spaces that can respond to the needs of the moment,” President Richard M. Englert said. “We are proud that this catalyst for collaboration will be named for Steve Charles.”
In 2011, Charles established the Stephen G. Charles Scholarship Fund in the Klein College of Media and Communication. Four years later, he joined Klein College’s Board of Visitors and committed $2 million to establish the Steve Charles Chair in Media, Cities and Solutions, a position held by prominent scholar and social commentator Marc Lamont Hill. It was the college’s first academic chair endowed by an individual donor and, at the time, the largest one-time gift in college history.
In 2016, he joined Temple’s Board of Trustees and helped lead the fundraising effort to name Klein College (then the School of Media and Communication) for broadcast pioneer Lew Klein. Most recently, he committed funding for various prizes for the next three years of the Be Your Own Boss Bowl business plan competition in the Fox School of Business.
“Opportunity and innovation occur at the intersection of disciplines,” Charles said. “I live by this idea, and the vision for the library embodies it as the place where students can collaborate in the latest ways. I hope alumni and friends will join me in supporting this project in the months ahead.”
Charles added that he is excited about the various ways in which the building will promote sustainability, such as stormwater management systems and a green roof that will be one of the largest in the state.
Charles’s gift to Temple Libraries follows a $1 million gift to name The Albert M. Greenfield Special Collections Research Center Reading Room on the first floor of the new library and to provide long-term funding to maintain that space.
Dean of Libraries Joseph Lucia said Charles Library will inspire Temple students and “provide a rich context” to connect them more deeply to one another for learning, conversation and creative work.
“Charles Library is a unique architectural presence on campus that will require continued investment to operate at its highest potential,” Lucia said. “Steve’s gift provides the financial capacity over the long term to achieve an endowment level that is liberating, exciting and a huge vote of confidence in Temple’s future. We couldn’t be more grateful.” 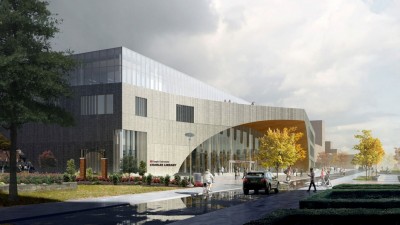 Caption: A rendering of the future Charles Library 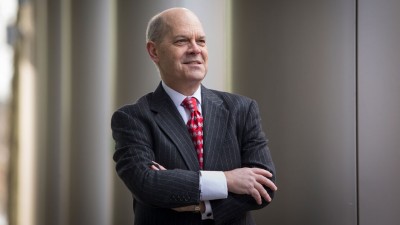