In Search of the American Dream

Mark Rank talks about "Chasing the American Dream: Understanding What Shapes Our Fortunes." 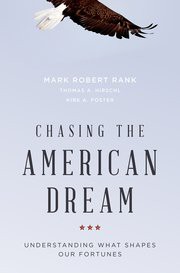 Newswise — The American Dream – the idea that hope and the promise of a good life is attainable through hard work and perseverance – is an ideal as familiar to American culture as motherhood, apple pie and rugged individualism.

But it may be slipping away, said Mark R. Rank, PhD, the Herbert S. Hadley Professor of Social Welfare at the Brown School at Washington University in St. Louis and one of the country’s foremost experts on inequality and social justice.

“More than at any time in our past,” Rank said, “there are serious questions regarding the American Dream and its applicability to everyday people.”

It’s those questions Rank and co-authors Thomas A. Hirschl, PhD, of Cornell University and Kirk A. Foster, PhD, a former doctoral student of Rank’s now at the University of South Carolina, grapple with in “Chasing the American Dream: Understanding What Shapes Our Fortunes” (Oxford University Press 2014).

Published April 1, “Chasing the American Dream” is unique in that it is based not simply on statistics, but on the stories behind the numbers – stories that give life to research on which Rank and his cohorts have spent years: The Panel Study of Income Dynamics (PSID), the longest-running longitudinal household survey in the world.

“What the book does is combine the statistics with the stories of people’s lives,” Rank said. “We did 75 interviews with people from all walks of life, from someone who is homeless to someone who manages a billion dollars’ worth of assets. It’s very compelling.”

The PSID began at the University of Michigan in 1968 with a nationally representative sample of over 18,000 individuals living in 5,000 families in the United States. Information was collected continuously through 1996, then every other year after that. The data covers employment, income, wealth, expenditures, health, marriage, childbearing, child development, philanthropy, education and numerous other topics.

Using data through 2009, Rank and colleagues went to work analyzing 41 years of numbers, putting them into what is called a “life table” and looking at economic events that happen to people year by year.

It’s in analyzing the numbers, Rank said, where the stereotypes begin to fade and a new picture of poverty begins to emerge. “The picture of poverty today isn’t just a homeless person waiting to get a meal or into a shelter,” Rank said. “It’s also that neighbor down the block that you think is doing OK, but they actually aren’t and you’re not even aware of it.”

It’s a picture painted by statistics. “What the data shows is that a majority of Americans will experience poverty, and that’s evidence-based, driven by research,” he said. “How you want to interpret that is up to you, but the numbers are the numbers.”

In the midst of number crunching, Rank began thinking about whether the data refuted the notion of The American Dream, and he sought to tell a narrative about whether that conviction was still alive.

“The first theme is really about being able to live the life that you want to live,” Rank said. “We’re not all able to do that, but it’s the idea of being able to follow your passion.

“The second is that hard work should be accompanied by economic security,” he said. “I should be able to raise a family and be somewhat comfortable.

“The third aspect is that the American Dream is about hope and optimism,” he said. “It’s about what’s down the road, it’s about will my kids do better than I am doing?”

Once defined, the middle section of the book talks about the pathways to achieving the American Dream and whether or not people actually get there. “The last part is making sense of all the data and posing some ideas about how we might strengthen the American Dream,” Rank said.

The takeaway from the book?

“In spite of all these statistics, Americans still feel that the American Dream is a really important idea,” Rank said. “To lose that is to lose the heart and soul of the country, and so people don’t want to let that go. I don’t think they should let that go.

“But yet there’s this other issue where we say ‘liberty and justice for all,’ but it really doesn’t apply to all,” he said. “So there’s a paradox here: We say the American Dream is open to everyone, and yet we show it’s not really open to everyone even though people believe that it is.

“And so what I would like to see happen is that these things align better together, so that when we say ‘liberty and justice for all’ we really mean all and not just for some.”

Rank said he hopes readers will glean from the book that the American Dream is an ideal for which we should all continually strive.

“Let’s really have a society where people are able to live up to their potential,” Rank said. “That’s what the American Dream is about, being able to live out your biography, whatever that may be.”

Rank has taught at the Brown School for 25 years. His first book, “Living on the Edge: The Realities of Welfare in America,” (Columbia University Press 1994) explored the conditions of surviving on public assistance, and achieved widespread critical acclaim. His “One Nation, Underprivileged: Why American Poverty Affects Us All,” (Oxford University Press 2004) provided a new understanding of poverty in America.

He has contributed numerous research articles in academic journals, and he’s a national figure when it comes to commenting on issues of poverty and welfare. Rank’s research was cited last December by President Barack Obama in a landmark speech on economic mobility, and he has provided data to the U.S. Congress Joint Economic Committee, the group of senators and Congress members responsible for reporting economic facts and figures and making suggestions to improve them.

More about Rank’s work at the Brown School is available here.