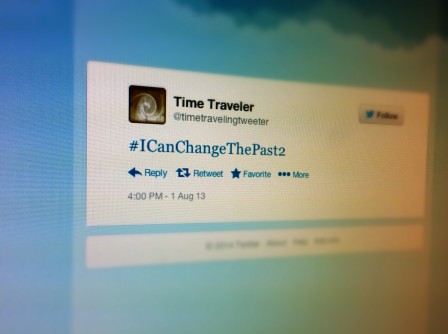 Physics professor Robert Nemiroff never really expected to see a tweet like this, but he and his students definitely enjoyed their efforts to find evidence of time travel on the Internet.

Newswise — It started over a poker game.

Astrophysicist Robert Nemiroff and his students were playing cards (for chips) last summer, chatting about Facebook. They wondered: If there were time travelers among us, would they be on social media? How would you find them? Could you Google them?

“We had a whimsical little discussion about this,” said Nemiroff, a professor at Michigan Technological University. The result was a serious-but-fun effort to tease out travelers from the future by sifting through the Internet. Unfortunately, they have uncovered no DeLorean time machines, but that hasn’t made the search less interesting.

You can’t just put out a cattle call for time travelers and expect good results. So Nemiroff’s team developed a search strategy based on what they call prescient knowledge. If they could find a mention of something or someone on the Internet before people should have known about it, that could indicate that whoever wrote it had traveled from the future.

They selected search terms relating to two recent phenomena, Pope Francis and Comet ISON, and began looking for references to them before they were known to exist. Their work was exhaustive: they used a variety of search engines, such as Google and Bing, and combed through Facebook and Twitter. In the case of Comet ISON, there were no mentions before it burst on the scene in September 2012. They discovered only one blog post referencing a Pope Francis before Jorge Mario Bergoglio was elected head of the Catholic Church on March 16, but it seemed more accidental that prescient.

They also searched for prescient inquiries submitted to search engines and combed through the Astronomy Picture of the Day site, which Nemiroff co-edits. Still no luck.

For their last and perhaps most ingenious effort, the researchers created a post in September 2013 asking readers to email or tweet one of two messages on or before August 2013: “#ICanChangeThePast2” or “#ICannotChangeThePast2.” Alas, their invitation went unanswered. And, they received no insights into the inherent contradictions of time travel.

“In our limited search we turned up nothing,” Nemiroff said. “I didn’t really think we would. But I’m still not aware of anyone undertaking a search like this. The Internet is essentially a vast database, and I thought that if time travelers were here, their existence would have already come out in some other way, maybe by posting winning lottery numbers before they were selected. “

A poster based on their study, “Searching the Internet for Evidence of Time Travelers,” (http://arxiv.org/abs/1312.7128) coauthored by Nemiroff and physics graduate student Teresa Wilson, will be presented Monday, Jan. 6, at the American Astronomical Society meeting in Washington, DC.

Nemiroff, who normally publishes on more arcane subjects, such as gravitational lensing and gamma-ray bursts, says this recent endeavor is not as big a stretch for him as some might think. “I’m always doing stuff on space and time,” he said, adding, “This has been a lot of fun.”