In the Absence of Genetic Variation, Asexual Invasive Species Find New Methods of Adapting to Their Environment 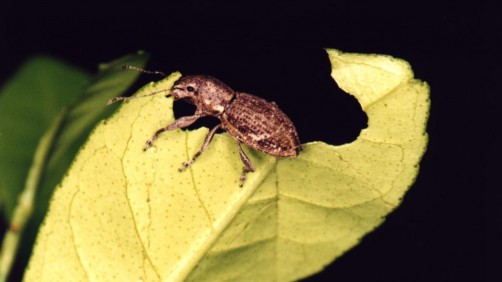 A Naupactus cervinus weevil, a common, yet invasive species in many parts of the world, is seen eating a leaf.

Newswise — Without the benefits of evolutionary genetic variation that accompany meiotic reproduction, how does an asexual invasive species adapt over time to a new environment to survive? In all-female weevil species that produce only female offspring from unfertilized eggs, the insects’ survival techniques have led to the surprising discovery that these creatures can pass down gene regulation changes to future generations.

New research from Wellesley College has found that two types of weevils, common yet invasive beetles in many parts of the world, have been using epigenetic changes to adapt and respond to different toxins in the plants they eat. The findings, published in PLOS ONE under the title “Host-Specific Gene Expression as a Tool for Introduction Success in Naupactus Parthenogenetic Weevils,” have implications for how we consider asexual invaders and how successful they can be because of gene regulation.

The researchers, led by Andrea Sequeira, Wellesley College Gordon and Althea Lang ’26 Professor of Biological Sciences, collected samples of parthenogenetic, invasive, and polyphagous weevils, Naupactus cervinus and N. leucoloma, from Florida, California, and Argentina over the course of five years, starting in 2015. Despite being from different locations within the United States where they have been introduced, often through commerce, the weevils are asexual and genetically identical. Yet the team found that they have uniquely adapted to produce different proteins that allow them to eat and digest a variety of plants, even those that produce toxins.

“We found that some host plant groups, such as legumes, appear to be more taxing for weevils and elicit a complex gene expression response,” Sequeira said. “However, the weevil response to taxing host plants shares many differentially expressed genes with other stressful situations, such as organic cultivation conditions and transition to novel hosts, suggesting that there is an evolutionarily favorable shared gene expression regime for responding to different types of stressful situations.”

“We also found that mothers are able to ‘prime’ their young with these epigenetic changes,” lead author and 2020 Wellesley College alumna Ava Mackay-Smith said. “Originally, we thought that these changes would only be seen in a single generation. When we studied larvae, who do not yet have mouths or eat plants, we found evidence of the same proteins and adaptations from their mothers.”

Sequeira noted this finding is especially important because classic understanding has been that in both sexual and asexual reproduction, all epigenetic marks are erased between generations and each generation starts over. “These mothers are essentially giving their offspring a pep talk, and preparing them for the harsh realities of the herbivorous insect world, by passing down these gene regulation ‘tips’ from one generation to the next.”

Mackay-Smith believes that having a better understanding of epigenetic changes in invasive, asexual species may eventually help regulate or mitigate their potential negative impact on an environment, native plants, or crops, for example. “Knowing what is in this insect’s repertoire, you could imagine that since we’ve now identified the proteins that are regulated differently, you could target a specific protein and design a targeted pesticide that removes only that species of weevil, without harming other native insects or fauna.”

Both Mackay-Smith and Sequeira are excited to see that perhaps genetic variation is not the only form of heritable variation for natural selection to act upon and that epigenetic processes may increase the evolutionary potential of organisms in response to stress and other environmental challenges—adaptations that could be relevant in the context of climate change.