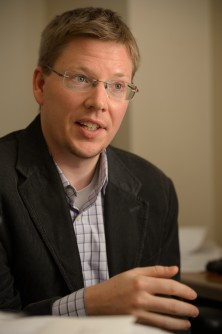 Newswise — Condescending comments, put-downs and sarcasm have become commonplace in the politically charged workplace, and a new study co-authored by a Michigan State University business scholar shows how this incivility may be spreading.

Reporting in the Journal of Applied Psychology, Russell Johnson, associate professor of management at the Eli Broad College of Business, and colleagues found that experiencing such rude behavior reduces employees’ self-control and leads them to act in a similar uncivil manner.

“People who are recipients of incivility at work feel mentally fatigued as a result, because uncivil behaviors are somewhat ambiguous and require employees to figure out whether there was any abusive intent,” said Johnson, associate professor of management. “This mental fatigue, in turn, led them to act uncivil toward other workers. In other words, they paid the incivility forward.”

While curt remarks and other forms of incivility do not involve openly hostile behavior such as bullying and threats, they are a frequent occurrence in the workplace and have a significant effect on employees, the study notes. According to estimates, workplace incivility has doubled over the past two decades and has an average annual impact on companies of $14,000 per employee due to loss of production and work time.

For the study, 70 employees filled out a survey relating to incivility and its effects three times a day for 10 consecutive workdays. Interestingly, the researchers found that “incivility spirals” – when acts of incivility lead to subsequent acts of incivility – can occur unintentionally.

“When employees are mentally fatigued, it is more difficult for them to keep their negative impulses and emotions in check, which leads them to be condescending and rude to colleagues,” Johnson said. “This happens even for employees who desire to be agreeable and polite; they simply lack the energy to suppress curt and impatient responses.”

“Being the victim of incivility leaves employees depleted because they must expend energy to understand why they were targeted and how to respond,” the study states. This is made more complex in highly political environments where “intentions and motives of others are less clear.”

One way to reduce perceptions of politics, the study says, is by providing clear feedback to employees regarding the types of behaviors that are desired. “This can be accomplished informally, by enhancing the quality of feedback provided during day-to-day interactions, or more formally via the performance management process.”