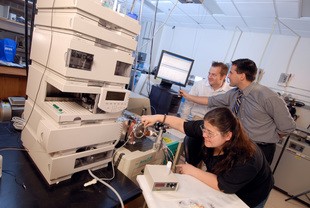 Georgia Tech Assistant Professor Facundo Fernandez and his students are studying new, high-throughput screening techniques to detect and quantify the contents of counterfeit anti-malarial drugs and other fake pharmaceuticals.

Researchers have identified genuine and fake Guilin Pharma artesunate blister pack holograms found in mainland southeast Asia. Photo (A) is the genuine hologram. The red arrow points to a legend stating "GUILIN PHARMA", which is visible with the naked eye as a thin strip below the waves, but can only be read with a microscope. Photo (B) is a fake artesunate blister pack hologram. The upper red ring shows that the hologram has crescents, rather than a continuous blank line, between mountain and waves, and the lower ring shows that there is no "GUILIN PHARMA" legend. Photo (C) is also a fake artesunate blister pack hologram. The red ring shows that the "GUILIN PHARMA" legend is present, but the letters are of larger font than those on the genuine hologram and can be read with the naked eye.

Newswise — A worsening epidemic of sophisticated anti-malarial drug counterfeiting in southeast Asia and Africa is increasing the likelihood of drug-resistant parasites, yielding false-positive results on screening tests and risking the lives of hundreds of thousands of malaria patients, mostly children, researchers say.

The situation has prompted an international group of researchers to urge national and international authorities to combat the problem with stringent regulations, law enforcement and the provision of inexpensive medicines to undercut the counterfeiters. Based on their own research and other scientists' studies, they outline the problem and make recommendations for addressing it in a paper published June 13 in the Public Library of Science journal PLoS Medicine. The researchers' work was funded by the Wellcome Trust of Great Britain and the Bill & Melinda Gates Foundation.

"The manufacture and distribution of counterfeit drugs, including anti-malarials, is a massive international problem, and few agencies are investigating it," said Facundo Fernandez, an assistant professor of chemistry and biochemistry at Georgia Tech and an author on the paper. His close collaborators include scientists Paul Newton from the University of Oxford in the United Kingdom and Michael Green from the Atlanta-based Centers for Disease Control and Prevention.

Malaria is a widespread international problem, primarily in poor and developing countries in the tropics " though some cases have been reported in Florida in the United States. The disease " transmitted by mosquitoes infected with the parasite Plasmodium falciparum -- infects 300 to 500 million people a year. Each year, about 1.5 million of those " mostly children " die even though genuine anti-malarial drugs are quite effective. One of the most efficacious drugs is artesunate derived from the Artemisia annua plant native to China.

The percentage of over-the-counter counterfeit artesunate tablets containing no artesunate apparently increased from 38 to 53 percent in southeast Asia between 1999 and 2004, according to a studies led by Newton and Professor Nicholas White at Oxford. In some countries, the majority of the available artesunate is fake, according to the Oxford studies, which are cited in the PLoS Medicine report.

Meanwhile, identifying counterfeit tablets has become increasingly difficult as counterfeiters have implemented sophisticated manufacturing and packaging strategies -- such as including low, but ineffective, levels of the proper active ingredients and applying counterfeit holograms to packaging -- to deceive investigators and consumers. In fact, Fernandez, a bioanalytical chemist, and his collaborators found that some counterfeit artesunate anti-malarial drugs contain up to 10 milligrams of the active ingredient " compared to the 50 milligrams that genuine artesunate tablets contain.

"We make no apology for the use of the term 'manslaughter' to describe this criminal lethal trade," the authors write. "Indeed, some might call it murder. Somewhere people are directing a highly technical and sophisticated criminal trade"¦ in the full knowledge that their ineffective 'product' may kill people who would otherwise survive malaria infection."

Serious implications exist for the relatively new practice of incorporating ineffective levels of active ingredients in artesunate tablets, the authors note. Exposure of malaria parasites to low concentrations of artesunate in patients taking counterfeit products will greatly increase the risk for the selection and spread of malaria parasites that are resistant to artemisinin derivatives. That could lead to a loss of effectiveness for these essential medicines and an avoidable failure of malaria control, they write. In addition, the presence of small quantities of artesunate in tablets may mean that the Fast Red dye test, widely used for screening the quality of artesunate tablets, yields false-positive results, depending on how much artesunate is present in the fakes.

Also, many fake artesunate tablets contain other drugs, possibly because the counterfeiters are trying to further deceive patients and doctors by producing a placebo effect, Fernandez said. "For example, some of the counterfeit tablets we analyzed contained acetaminophen that would reduce a fever, or the antibiotic erythromycin, or even early-generation anti-malarials that are no longer effective."

The researchers' analyses determined there are now at least 12 different types of fake artesunate, classified by Oxford researchers based on the counterfeit holograms affixed to artesunate packaging. Evidence suggests that production is on an industrial scale, according to research by Newton and Green published in 2001 in the British medical journal The Lancet. For example, a non-governmental organization in Burma purchased 100,000 counterfeit artesunate tablets from one large pharmacy, the researchers note.

"At this point, we believe there are probably multiple sources, but they may be using the same distribution network," Fernandez added.

The authors also cite serious implications of this public health problem for tourists in malaria-prone countries. Visitors often buy unregulated artemisinin derivatives in the tropics or on the Internet. It is inevitable that counterfeit artesunate will seep into this trade, the authors predict.

The greater concern, they note, is for sub-Saharan Africa. Since 2001, artemisinin derivative-based combination therapy (ACT) has increasingly become the first-line malaria treatment in Africa. Authorities estimate that 130 million courses of ACT will be used in Africa in 2006.

"The high cost and shortage of ACT provide a favorable situation for the spread of fake artemisinins that could put the lives of thousands of African children at risk," the authors write. They urge authorities to implement tighter controls on drug importation, as well as a subsidy of up to $500 million a year to ensure that ACTs provided through the private sector are relatively inexpensive and locally affordable so there is no financial advantage in unwittingly purchasing a fake.

"It will be an avoidable tragedy if a lack of political will and action allows fake artesunate to compromise the hope that artemisinin derivative-based combination therapy offers for malaria control in Africa and Asia and results in the emergence and spread of resistance to the artemisinin drugs, shortening the useful life of these vital medicines," the authors add. "As global efforts to control malaria rely heavily on these drugs, these issues deserve overdue, urgent action to prevent a public health disaster in the malarious world."

In related research, several of the authors, led by Fernandez, are studying new, high-throughput screening techniques to detect and quantify the contents of counterfeit anti-malarial drugs and other fake pharmaceuticals. This research will be published in an upcoming edition of the journal ChemMedChem. After the embargo lifts, you can read more about this work online at: http://gtresearchnews.gatech.edu/newsrelease/detect-fakes.htm.

Several images are available from the media relations contacts listed above. Also, the images can be downloaded in high-resolution format at http://www.gtresearchnews.gatech.edu after the embargo lifts. A PDF copy of the paper is available upon request.