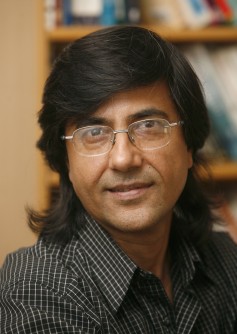 BLOOMINGTON, Ind. -- Saturday's devastating earthquake in Nepal has claimed more than 4,000 lives and left historic areas of the country in ruins. Faculty members in the Indiana University School of Global and International Studies and the IU College of Arts and Sciences are available to offer perspectives.

Indiana University and its Asian Culture Center are planning an event to express support for and solidarity with the victims of the disastrous earthquake in Nepal. "IU 4 Nepal" is a forum and candlelight vigil starting at 7 p.m. Thursday. A location will be announced later. The forum will highlight relief efforts and provide political, cultural, historical and scientific background, as well as economic concerns. The candlelight vigil will include readings by writers whose work has been influenced by Nepal. For details, check Asian Culture Center's website or an IU4Nepal Facebook page.

An official Nepal Earthquake Relief Fund has been established at www.globalgiving.org. IU students are also developing a crowd-funding project with Indiegogo.com. More information is forthcoming.

Samrat Upadhyay, the Martha C. Kraft Professor of Humanities at IU Bloomington and an author of several books about Nepal, said Saturday's earthquake is reminiscent of another that took place in 1934.

"We had been warned. In the early '90s, when I returned to live in Nepal for two years, the country experienced mild earthquakes," said Upadhyay, whose parents survived and are camping on the outskirts of Kathmandu.

"Articles appeared in newspapers claiming that a major earthquake was imminent. The reason: movement of tectonic plates in the Himalayas, the very process that created those mountain peaks of stunning beauty in the first place. Concerns were raised about lack of preparedness, especially with the alarming growth of shoddily constructed buildings. But these prophesies of a major trembler didn’t come true. I was among those who thought the reports were exaggerating.

"As it turns out, just last week earthquake experts had met in Kathmandu to discuss such calamity," added Upadhyay, whose wife's family also survived the quake.

"Thousands have lost their lives, many more have lost their homes, and centuries-old temples -- prized for their exquisite carvings in Kathmandu Valley’s old palace squares -- have been destroyed. Kathmandu Durbar Square is in ruins. Patan Durbar Square has been devastated. These were World Heritage sites so, in a very literal sense, the whole world has lost physical access to its cultural history.

"Nepalis, most of whom are Hindus and Buddhists, are well-attuned to the idea that nothing is permanent. The champion of impermanence, Siddhartha Gautama Buddha, was born in Nepal. He also taught that life, by its very nature, is filled with suffering."

Upadhyay, the first Nepali-born fiction author writing in English to be published in the West, is the author of six novels and collections of short stories, including “Arresting God in Kathmandu," which received the Whiting Writers’ Award and was a pick for the Barnes & Noble Discover Great Writers Program, and “The Guru of Love,” which was named a New York Times Notable Book of the Year. Other books include his latest, "The City Son," "Buddha's Orphans," "The Royal Ghosts" and "Secret Places."