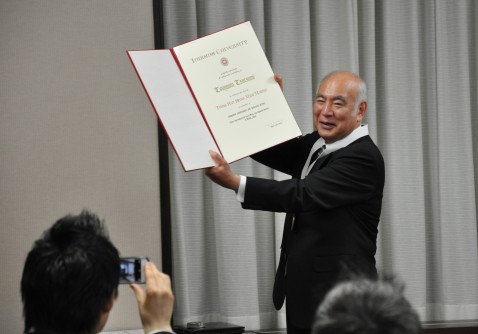 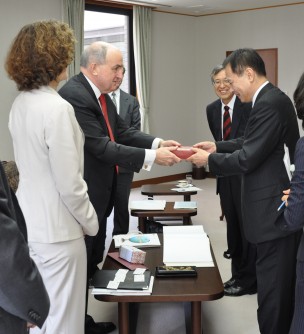 Newswise — TOKYO and BLOOMINGTON, Ind. -- Indiana University President Michael A. McRobbie concluded an official visit to Japan today by bestowing on one of the country's musical treasures, renowned cellist Tsuyoshi Tsutsumi, one the university's highest honors.

Tsutsumi received IU's Thomas Hart Benton Medallion at an event celebrating the 50th anniversary of the university's alumni chapter in Japan, which was created by Fujitsu co-founder Kaoru Ando.

Today's gathering of IU alumni in Tokyo -- the largest ever held in the Japan alumni chapter’s history – came after three days of events and meetings between McRobbie and senior administrators at Waseda University, Osaka University, the Shibusawa Eiichi Memorial Foundation and the Tsuchiya Group, which has a subsidiary in Bloomington, Ind., that employs 180 people.

Joining him on his latest visit to Japan were IU Vice President for International Affairs David Zaret, IU first lady Laurie Burns McRobbie and IU Foundation President and CEO Dan Smith. McRobbie has worked extensively in Japan over his career, and this is his 31st visit to Japan in nearly 30 years.

Tsutsumi came to IU in his late teens to study at the Jacobs School of Music with renowned cellist Janos Starker on a Fulbright Scholarship, after studying at the Tokyo Conservatory under Hideo Saito and after a concert tour of India and Europe. Within a couple of years, he became Starker's assistant and earned an artist's diploma from the Jacobs School in 1965.

After a successful concert career with many of the world's leading orchestras, Tsutsumi returned to IU Bloomington and the Jacobs School, where he taught from 1988 to 2006. He is the first president of the Japan Cello Society and in 2004 became president of the Toho Gakuen School of Music -- where he still teaches -- and later became director of Suntory Hall in Tokyo.

Tsutsumi has received the National Academy of Arts Prize in music from the Emperor of Japan. In 2009, the government of Japan awarded him a Medal of Honor with purple ribbon for his contributions to academic and artistic developments, improvements and accomplishments. The Benton Medallion is given to individuals who have achieved a level of distinction in public office or service and have exemplified the values of IU.

"It is my honor to celebrate one alumnus whose professional accomplishments have made a great difference to Indiana University," McRobbie told Tsutsumi. "Through your service on the faculty of Indiana University, you taught and mentored a generation of young musicians. You have also, through your outstanding career as an international performer, helped to deepen and strengthen international understanding and cooperation, using music as an instrument of cultural diplomacy."

After a performance by Tsutsumi, the IU Alumni Association Japan Chapter was honored as the university's alumni chapter of the year. Japan today has more than 1,500 living IU alumni.

Though it boasts a strong history of engagement in Japan, IU is seeking to rejuvenate its relationships with Japan’s leading universities by increasing the number of IU students studying abroad in Japan and welcoming more Japanese students to IU.

To this end, on Monday, McRobbie met with Waseda University President Kaoru Kamata about further collaboration between the two universities, which signed a partnership agreement in 2012.

IU first lady McRobbie discussed the history of women's leadership and philanthropy at IU and the emergence of women's giving at IU. She also spoke about the recent establishment of the Lilly Family School of Philanthropy -- the first school dedicated to the study of philanthropy in the United States -- and IU's first Women's Philanthropy Council, which has become a national model.

The IU delegation also met with Yasuyuki Ohara, a graduate of Waseda and chairman and CEO of the Tsuchiya Group. Among the corporation's many interests is TASUS Corp., which has been headquartered in Bloomington since 1986.

On Tuesday, the IU contingent traveled to Osaka, where McRobbie met with faculty and administrators from Osaka University's Graduate School of Medicine and its international language and cultural studies programs. IU and Osaka agreed to explore a potential student exchange program focused on IU’s and Osaka’s rich resources in world languages, including Japanese and African languages, collaborative research among faculty and possibilities for a broader partnership between Osaka’s School of Foreign Studies and IU’s new School of Global and International Studies.

Today they met with Yasushi Akashi, chairman of the International House of Japan, a nonprofit organization that promotes cultural exchange and intellectual cooperation between the people of Japan and other countries.

McRobbie and other IU officials also met today with Masahide Shibusawa, president and CEO of Shibusawa Eiichi Memorial Foundation, a private foundation started by protégés of his great-grandfather, Shibusawa Eiichi, one of the founders of modern Japanese society, more than 120 years ago.

The day concluded with a visit to the U.S. embassy in Japan, where McRobbie and Ambassador Kennedy discussed strategies and programs being developed to increase the number of Japanese and American students studying abroad in each other’s countries to reverse the declines in recent years.

The study of Asia at IU spans more than 20 departments and professional schools on the Bloomington campus, including the Department of East Asian Languages and Cultures, which recently marked its 50th anniversary; and the Title VI-supported East Asian Studies Center.

After leaving Japan, McRobbie and the rest of the IU delegation will travel to China, Vietnam, Singapore and Hong Kong. Reports about the trip are available at a blog site, IU Goes to Asia, as well as new website, IU Worldwide, and through official IU social media channels on Facebook and Twitter. 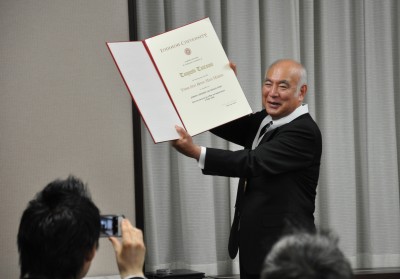 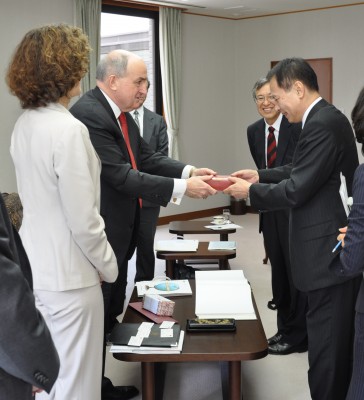