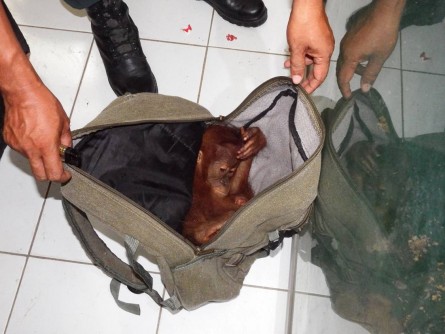 Orangutan confiscated during apprehension of wildlife trafficker in Indonesia

Newswise — (NEW YORK-April 16, 2015) – The State Prosecutor of North Sumatra and WCS’s Wildlife Crimes Unit announced the arrest of a suspect for trafficking a living orangutan in Medan, North Sumatra, Indonesia. The trafficker allegedly sold wildlife through Facebook and by BlackBerry Messenger. The arrest was made on April 13, 2015.

The trader, identified as VHN, confessed that he received illegal wildlife and wildlife items from local hunters and collectors in Aceh and North Sumatra, as well as having a trafficking network in Java. Based on information gathered in the initial investigation by Civil Servant Investigators (PPNS) and the North Sumatra Natural Resource Conservation Agency (BBKSDA), the trader allegedly sold various protected living wildlife including orangutans, golden cats, hedgehogs, greater slow loris, siamang, Javan gibbons, hornbills and juvenile crocodiles. He also sold wildlife parts such as hornbill beaks, tiger skins and tiger fangs.

The suspect was apprehended in February conducting a transaction involving a living orangutan believed to be 6-12 months old and worth USD $1,300 on the illegal market. The arrest on April 13 is the second level of the suspect’s law process before going to trial. Besides orangutans, the suspect’s network offered other wildlife and wildlife parts such as green peafowl, antler and deerskin, weasel, and more.

According to preliminary investigations, the trader was a top player in the online trader network in Medan based on his network’s connectivity, animal variety, and volume. The arrest came about following a similar online trading case in 2014. In that case, an associate working for VHN was caught by BBKSDA with a golden cat, siamang and gibbon.

Head of the Nature Conservation Agency (BKSDA) North Sumatra John Kenedie said, “This arrest is our effort to enforce the law toward the environmental criminal. The growing wildlife trade is due to a high demand for protected wildlife. Therefore, we encourage people to not trade or keep wildlife as pets, including orangutans.”

Irma Hermawatti, Policy and Legal Advisor of the Wildlife Crimes Unit said, “We appreciate firm action from the authorities in arresting this illegal wildlife trader. The effort to stop orangutan and other wildlife trading is a tough journey with great commitment needed from all stakeholders. We hope that the legal process can be effectively imposed in order to act as a deterrent to the perpetrator and anyone else who want to perform similar acts.”

WCS Executive Director for Asia Programs Joe Walston, said: “The Wildlife Crimes Unit is supporting the Indonesian authorities in achieving a growing list of arrests and prosecutions of perpetrators of wildlife crimes. Through a combination of commitment and intelligence, Indonesia is now making strides in the war against wildlife crime, and in securing the natural heritage of Indonesia for its citizens-now and in the future.”