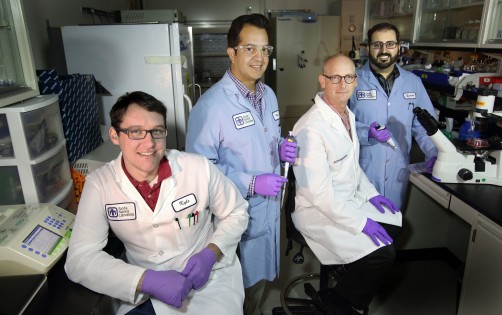 Newswise — LIVERMORE, Calif.— Gene editing is revolutionizing the bioscience research landscape and holds great promise for ‘deleting’ diseases from human bodies. Sandia National Laboratories is now working to make this technology safer and to ensure that one day it can be delivered into humans without triggering adverse immune system reactions or causing other undesirable side effects.

Sandia biochemist Joe Schoeniger explains that gene editing technology is based on a “billion-year-old arms race” between bacteria and the viruses trying to attack them.

Bacteria save bits of invading viral DNA using a system called Clustered Regularly Interspaced Short Palindromic Repeats or CRISPR. This system helps bacteria recognize a virus when it returns for a repeat attack. The CRISPR system produces Cas9, an enzyme that binds to the offending viral DNA, then cuts and destroys it.

This bacterial defense system can be programmed. Scientists can send CRISPR-Cas9 to a precise location, to alter a specific bit of DNA.

The ability to alter DNA is useful, especially when dealing with genetic diseases, but alterations to DNA are currently irreversible. Using the technology as it is today could cause unintended, dangerous and permanent side effects. It could cut a genome in the wrong place (i.e. have off-target effects), potentially causing disease.

In addition, CRISPR-Cas9 needs a carrier to be delivered into human cells. Typically, this carrier is a virus linked to the common cold called adeno associated virus. According to Sandia virologist Oscar Negrete, a majority of people have been exposed to strains of this virus at some point. This means people are quick to manufacture antibodies against it, making it a one-time use only therapy. Even on that first use, patients are likely to have an immune reaction, Negrete explained. New approaches are needed that enable the treatment to be successfully used more than once if necessary.

To be able to control CRISPR technology and use it without causing permanent DNA changes, the Defense Advanced Research Projects Agency (DARPA) created the Safe Genes program.

One effort being funded under Safe Genes is a $2.5 million, two-year project led by Jennifer Doudna’s laboratory at the University of California, Berkeley, in partnership with Sandia, and the University of California, San Francisco. Doudna is a pioneer in the development of CRISPR. If the early research is fruitful, DARPA could extend this effort for another two years, bringing the total to four years and $5 million.

Viruses are skilled at changing their DNA and generating new anti-CRISPR proteins to block the bacterial immune systems. This is the other side of the bacteria-virus “arms race.” These proteins can function as antidotes, allowing gene editors to be turned off if needed.

The Safe Genes team is taking advantage of these proteins to develop inhibitors that can control off-target effects of CRISPR. Schoeniger explains that should a dose of a gene editor need to be administered, it could be followed by a dose of the inhibitor to shut it off, minimizing the amount of time in which off-target effects could take place.

Normally, the CRISPR system targets DNA, but Sandia has been collaborating with Doudna’s team to create a CRISPR system that targets RNA instead. Attacking virus RNA directly is likely to be effective against most pathogens of bio-safety concern, according to Sandia virologist Oscar Negrete.

CRISPR systems already exist that target RNA, but these systems result in general RNA degredation. This new RNA-targeting system can affect specific human or animal RNA, including those known to encode proteins that aid viral infection.

“Some proteins are known gateways for invaders,” Negrete explained. “If you knock out these proteins via their coding RNAs, the pathogens can’t get into your cells and you haven’t made any permanent changes to your genome.”

For the Safe Genes project, Sandia will test the RNA-targeting CRISPR technology against a variety of viruses. The Sandia team will deliver the CRISPRs to mammalian cells infected with a variety of RNA viruses, including Ebola and Rift Valley Fever Virus, that cause symptoms such as hemorrhagic fever. Then they’ll measure the level of virus remaining in the cells after treatment.

“Ideally, we’d like to see the level of virus reduced to zero. If it isn’t, the CRISPR technology would have to be modified,” Negrete said.

In addition, the UCSF team is developing CRISPR-derived technologies to turn genes on and off without editing DNA. For this application, the team is harnessing CRISPR for targeted DNA methylation. DNA methylation is a non-destructive mechanism of gene expression regulation that occurs naturally throughout the mammalian life cycle.

Negrete believes this work, if successful, would represent a quantum leap forward for virology because the new CRISPR technologies would attack illnesses in multiple ways. Currently, vaccines target single strains of a virus. Sandia’s Safe Genes project is working toward solutions that target all the strains of a virus, as well as finding ways to repair infected host / human cells.

“It’s cumbersome to create new treatments for each and every bug, and not feasible for quickly responding to emerging threats. One treatment for each and every strain that appears, as well as all the related viruses – it’s a much better strategy,” Negrete said. “It’s like the leap from eliminating one letter with a pencil eraser to hitting control-A and deleting an entire paragraph.”