For the first time, the cellular mechanisms for cancers caused by chronic inflammatory conditions are explained, providing potential therapeutic targets in the process. 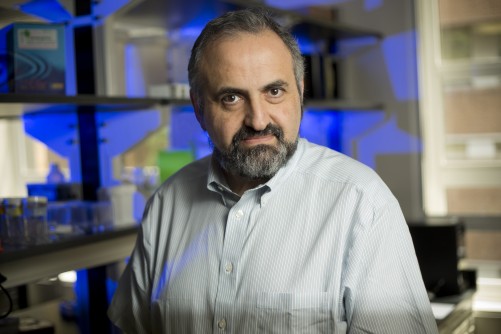 Newswise — PHILADELPHIA—(February 9, 2015)—Chronic inflammation is directly associated with several types of cancer, yet the reasons as to why this happens at a cellular level remain unclear. Now, an international team of scientists led by researchers at The Wistar Institute has identified a multistep process showing not only how these cancers develop but also potentially discovering new therapeutic targets that could halt the formation and progression of tumor cells.

The findings were published online by the Journal of Experimental Medicine.

While inflammation is an important part of how we recover from disease and injury, chronic inflammation has been linked to a variety of cancers, such as basal cell carcinoma, lung, liver, colon cancer and others. Numerous studies have associated chronic inflammation with cancer, yet research has been largely unable to describe the roles of specific cells when this happens.

“While we know that cancer is initiated because of genetic alterations, we also know that cancer’s development relies heavily on environmental factors,” said Dmitry Gabrilovich, M.D., Ph.D., The Wistar Institute’s Christopher M. Davis Professor, Professor and Program Leader of the Translational Tumor Immunology Program, and Professor in the Tumor Microenvironment and Metastasis Program. “Inflammatory conditions are closely linked to cancer, yet it’s a very complex process, making it difficult to determine how certain components contribute to the development of cancer.”

Gabrilovich and his fellow investigators demonstrated that inflammatory conditions are associated with a specific phenotype of myeloid cells called immature granulocytic cells.

Using transgenic mice that expressed this phenotype, Gabrilovich’s lab created conditions in which the granulocytic cells would accumulate in the absence of typical methods of inflammation, such as tissue damage or infection. When the mice were exposed to a tumor-promoting substance called TPA, the researchers observed a dramatic increase in the formation of benign tumors, or papillomas, usually among the first signs of the formation of skin cancer.

Gabrilovich and his team found that the granulocytic cells arrive at the skin and stimulate the migration of lymphocytes, which in turn stimulate the abnormal growth of keratinocytes, the most common type of skin cell found in the epidermis. The granulocytic cells are able to “recruit” these lymphocytes by releasing a specific factor called chemokine CCL4. This factor then recruits CD4+ T cells that produce interleukin-17 (IL-17), a proinflammatory cytokine that has already been linked to chronic inflammation and inflammatory cancers.

Through a series of steps, this study implicates that granulocytic cells accumulate and serve as the first step of tumor formation, followed by the recruitment of CD4+ T cells that produce IL-17. The combination of these events ultimately results in the development of cancer. While this study focused on skin cancer, Gabrilovich said that the study could apply to any type of cancer linked to chronic inflammation. If proven for other conditions this mechanism could open an opportunity for potential therapeutic targeting in patients with chronic inflammation that predispose a patient to cancer.

“If we are able to target these granulocytic cells directly, we may be able to prevent the inflammatory effects of IL-17, which would provide a great benefit to individuals with a high risk of developing these types of cancer,” said Vinit Kumar, Ph.D., a member of the Gabrilovich laboratory and one of the co-authors of the study.

This work was supported by the National Institutes of Health grant CA 100062. Other grants supporting this studying included Grants P50 CA168536 and R01CA157303.

This study was made possible through the efforts of an international team of scientists. In particular, Dr. Gabrilovich said study co-authors Vinit Kumar and Sridevi Mony were instrumental in the completion of this study. Other co-authors of this study who have been or currently are members of the Gabrilovich laboratory include Laxminarasimha Donthireddy, Thomas Condamine, Myrna L. Ortiz (currently at H. Lee Moffitt Cancer Center), Anna Martner (currently at the Sahlgrenska Cancer Center at the University of Gothenberg, Sweden), and Brianna Lenox (also currently at Sahlgrenska Cancer Center). Other co-authors of the study include Noreen Luetteke from Moffitt; John Seykora from the University of Pennsylvania; Stella C. Knight from Imperial College London, England; George Malietzis and Gui Han Lee from Imperial College and St. Mark’s Hospital, Harrow, England; Morgan Moorghen from St. Mark’s; and Esteban Celis from Georgia Regents University Cancer Center.

The Wistar Institute is an international leader in biomedical research with special expertise in cancer research and vaccine development. Founded in 1892 as the first independent nonprofit biomedical research institute in the country, Wistar has long held the prestigious Cancer Center designation from the National Cancer Institute. The Institute works actively to ensure that research advances move from the laboratory to the clinic as quickly as possible. The Wistar Institute: Today’s Discoveries – Tomorrow’s Cures. Wistar Science Saves Live. On the Web at www.wistar.org.###