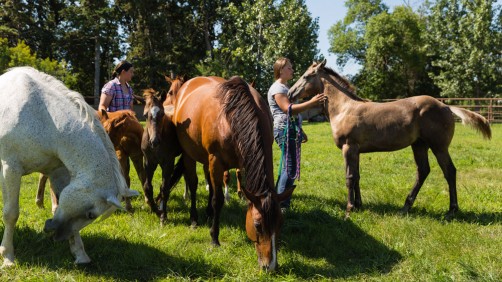 Researchers at South Dakota State University found antibodies against influenza D in blood samples from horses in the Midwest collected in 2015 and 2016. Cattle are the primary reservoir for Influenza D, which was first isolated from a diseased pig in 2011.

“It’s nothing we need to worry about at this moment, but more studies are needed,” said professor Feng Li of the Department Biology and Microbiology. “Horses are clearly another host for the influenza D virus, but we do not know what type of symptoms horses experience.”

In cattle, influenza D typically appears as part of a respiratory disease complex. The next step in horses will be to isolate the virus and characterize it to determine whether it is different than other strains.

SDSU alumnus Ben Hause, now vice-president of research, development and diagnostics at Cambridge Technologies in Minnesota, isolated the virus from a diseased pig in 2011, but later found that cattle were the primary reservoir for the influenza D virus. Hause identified and characterized those two strains of the virus as part of his doctoral research under the tutelage of Li.

Through a National Institutes of Health grant, South Dakota State researchers identified influenza D antibodies in goats and sheep in the Midwest and proved that the guinea pig can be used as an animal model to study the virus. In 2016, the International Committee of Taxonomy of Viruses officially announced a new genus, Orthomyxovirdae, with a single species, Influenza D virus, because of its distinctness from other influenza types—A, B and C.

Li and his research team tested 364 blood samples collected in 2015 from horses at 141 farms in Iowa, Minnesota, North Dakota, Nebraska, South Dakota and Wyoming for antibodies to both influenza D strains and the closely related human influenza C. The farms also have cattle and are in a region where influenza D exposure has been detected. Blood samples were obtained through the South Dakota Animal Disease and Diagnostic Research Laboratory.

In addition, the researchers tested 100 blood samples collected from horses and ponies at a farm show in 2016.  The animals in this study were young and represented fewer states and a smaller number of farms, Li pointed out. Three tested positive for antibodies against the influenza strain isolated from pigs, while two were positive for the influenza D strain from cattle.  However, eight animals had antibodies against human influenza C.

Furthermore, 22 blood samples from the 2015 group and 14 from the 2016 group were validated using a more specific, more sensitive test that verifies that the antibodies effectively neutralize the virus, Li explained. The testing confirmed the primary screening findings. The results are published in the November 2017 issue of Zoonoses and Public Health.

Though some animals had antibodies to both influenza D and human influenza C, Li said, “there is no correlation between the two in this study, so far.”

This study shows that when cattle and horses comingle, the possibility for virus transmission between the species exists. “The virus can spill over from cattle to horses,” he said.

Whether influenza D can be transmitted among horses has yet to be determined. Li noted that in one instance, all four horses on the same farm tested positive for influenza D antibodies. “It may be possible that one horse contracted the virus from cattle and then transmitted it to the other three,” Li said. He expects to find some level of transmission among horses.