Research led by St. Jude Children’s Research Hospital investigators could help reduce side effects associated with the anti-cancer drug vincristine, which is widely used to treat cancer in children and adults 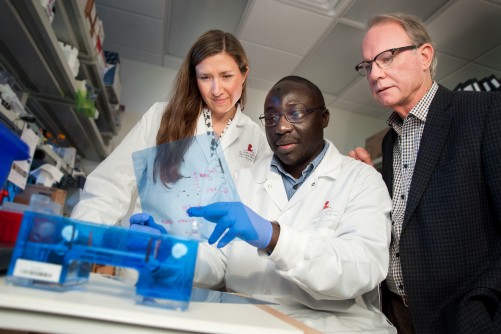 Researchers have identified the first genetic variation that is associated with increased risk and severity of peripheral neuropathy following treatment with a widely used anti-cancer drug, vincristine.

Newswise — (MEMPHIS, Tenn. – February 24, 2015) Researchers have identified the first genetic variation that is associated with increased risk and severity of peripheral neuropathy following treatment with a widely used anti-cancer drug. Investigators also found evidence of how it may be possible to protect young leukemia patients without jeopardizing cures. St. Jude Children’s Research Hospital scientists led the study, which appears today in the Journal of the American Medical Association.

The study involved 321 children and adolescents whose acute lymphoblastic leukemia (ALL) treatment included between 36 and 39 doses of the drug vincristine.

Researchers screened patient DNA for almost 1 million common inherited genetic variations and found that 60.8 percent of those who inherited two copies of a variation in a gene named CEP72 developed peripheral neuropathy. Vincristine-related peripheral neuropathy was diagnosed in 23.4 percent of patients who inherited at least one of the more common versions of CEP72. Patients with two copies of the high-risk CEP72 variant were also more than twice as likely as other patients to experience serious, disabling or life-threatening peripheral neuropathy. The newly identified CEP72 variant also increased the sensitivity of cancer cells to vincristine. “That suggests it might be possible to lower the vincristine dose in these patients without compromising the likelihood of cures,” said the corresponding author William Evans, Pharm.D., a member of the St. Jude Department of Pharmaceutical Sciences. The possibility will be studied in a St. Jude clinical trial scheduled to open later this year for newly diagnosed pediatric ALL patients. “St. Jude researchers have already achieved high cure rates for ALL. In this study, they identified a possible reason why some people experience a serious side effect of the medication—debilitating nerve pain,” said Rochelle Long, Ph.D., director of the National Institutes of Health Pharmacogenomics Research Network. “This genetic insight will help scientists devise treatment plans that ensure safety and effectiveness as well as the long-term quality of life for children with ALL.” Vincristine is one of the most widely used and effective agents for treatment of leukemia, lymphoma, brain and solid tumors in children and adults. But in a significant number of children and adults, the drug causes episodes of peripheral neuropathy that can become chronic and resurface in adulthood. The symptoms, which include pain, numbness and other changes that make walking difficult, are often severe enough to delay treatment. Such delays can compromise the likelihood of a cure. Currently there is no way to identify patients who are most likely to develop the nerve damage. Overall 50 patients, or 16 percent of 321 those in this study, inherited two copies of the high-risk CEP72 variant. The study included 222 newly diagnosed patients enrolled in the St. Jude Total XIIIB clinical trial between 1994 and 1998. The remaining 99 patients were part of a Children’s Oncology Group (COG) study for relapsed patients. COG is the world’s largest organization devoted exclusively to childhood and adolescent cancer research. The high-risk CEP72 variant identified in this study was linked to a greater risk of peripheral neuropathy even when researchers took other risk factors into account, including race and vincristine dose. Vincristine-related peripheral neuropathy is less common among African-American patients. Researchers found that the high-risk version of the gene is also less common in African-American patients, so they are less likely than patients from other racial backgrounds to inherit the high-risk version of CEP72. CEP72 carries instructions for assembling the CEP72 protein, which is essential for formation of the cellular machinery that ensures genetic material is divided properly during cell division. Vincristine targets the same process in cells. The high-risk CEP72 variation occurs in a region of DNA that regulates gene activity and turns the gene on and off. In cells growing in the laboratory, investigators showed the high-risk variant was associated with reduced CEP72 activity and greater sensitivity to vincristine in human nerve cells and cancer cells, including ALL. Evans and his St. Jude colleagues have pioneered the use of pharmacogenetics to enhance the safety and effectiveness of chemotherapy by studying how inherited differences in the makeup of genes influence patients’ response to drugs. “Today at St. Jude, 94 percent of newly diagnosed ALL patients will be alive in five years,” Evans said. “The challenge now is to maintain and improve cure rates while improving the quality of life for children during treatment and beyond.”