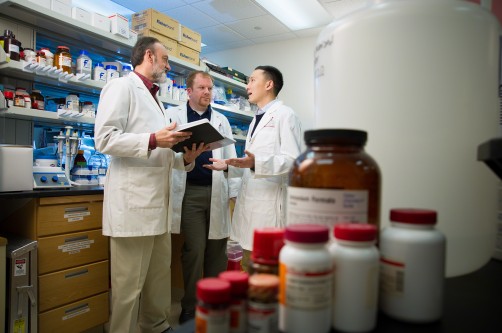 Cisplatin is one of the most widely used anti-cancer drugs and is a mainstay of treatment for children and adults with many types of brain and other solid tumors. But in some patients the drug causes debilitating side effects, including severe hearing loss. The risk factors involved are not completely understood. “Even for children receiving uniform therapy, there is substantial variability in their hearing damage after cisplatin treatment, and we suspect this has to do with differences in patients’ genetic make-up,” said co-corresponding author Jun J. Yang, Ph.D., an assistant member of the St. Jude Department of Pharmaceutical Sciences.

Researchers checked the DNA of 238 young brain tumor patients for more than 1.7 million common genetic variations. Variations in a gene named ACYP2 were associated with as much as a four-fold greater risk of cisplatin-related hearing loss. The screening is among the first to survey the genetic landscape for clues to help explain why the risk of cisplatin-related hearing loss varies so widely among patients. St. Jude is a leader in research to improve medication safety and effectiveness. Its research aims to understand how inherited genetic variations affect the way individuals metabolize and respond to drugs.

“This is an important first step in being able to pinpoint patients who are at higher risk of developing cisplatin toxicity and to learn how to better manage that risk,” said co-corresponding author Clinton Stewart, Pharm.D., a member of the St. Jude Department of Pharmaceutical Sciences.

“This suggests that other genes also contribute to the risk of hearing loss and are yet to be identified,” Yang said. “Further research is needed to understand how the ACYP2 variations modify the risk facing patients of cisplatin toxicity.”

Such studies could potentially lead to new medications to protect high-risk patients from cisplatin-related toxicity or help identify candidates for intensive monitoring of their hearing. Early intervention could then be offered if problems are identified, Stewart said.

This study included patients enrolled in one of three clinical trials designed by St. Jude investigators for newly diagnosed pediatric brain tumors. The protocols involved similar treatment, including surgery to remove as much of the tumor as possible followed by radiation, which was modified based on patient age and other risk factors. The patients were scheduled to receive four rounds of cisplatin therapy. Patients’ hearing was tested before treatment began, after radiation therapy, after each round of chemotherapy and then at regular standardized intervals. Analysis of the resulting data led to identification of ACYP2 and other variants.

“Our primary goal is to cure children with brain tumors, but we also have a duty to help patients survive with a high quality of life. Hearing loss can have a significant impact on a child’s quality of life, language development and academic performance,” said co-first author Giles Robinson, M.D., an assistant member of the St. Jude Department of Oncology. “There is no easy fix, but the more we know about the risk factors the better we will understand how to use cisplatin.”

The research was funded in part by grants (CA2176534, GM92666) from the National Institutes of Health and ALSAC.