Inherited ‘Memory’ of Environmental Impact on Health May Be Limited 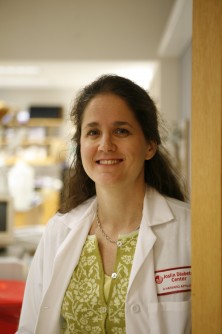 Mary-Elizabeth Patti, M.D., Director of the Joslin Genomics Core and the Hypoglycemia and Severe Insulin Resistance Clinic at Joslin as well as Assistant Professor of Medicine at Harvard Medical School.

Newswise — BOSTON – (July 10, 2014) – When a pregnant mother is undernourished, her child is at a greater than average risk of developing obesity and type 2 diabetes, in part due to so-called ‘epigenetic’ effects. A new study in mice demonstrates that this ‘memory’ of nutrition during pregnancy can be passed through sperm of male offspring to the next generation, increasing risk of disease for her grandchildren as well. In other words, to adapt an old maxim, ‘you are what your grandmother ate’. The study has also raised questions over how epigenetic effects are passed down from one generation to the next – and for how long they will continue to have an impact.

The mechanism by which we inherit characteristics from our parents is well understood: we inherit half of our genes from our mother and half from our father. However, epigenetic effects, whereby a ‘memory’ of the parent’s environment is passed down through the generations, are less well understood. The best understood epigenetic effects are caused by a mechanism known as ‘methylation’ in which the molecule methyl attaches itself to our DNA and acts to switch genes on or off.

In a study published today in the journal Science and funded mainly by the Medical Research Council and the Wellcome Trust, an international team of researchers has shown that environmentally-induced methylation changes occur only in certain regions of our genome (our entire genetic material) – but, unexpectedly, that these methylation patterns are not passed on indefinitely.

Researchers led by Joslin Diabetes Center and the University of Cambridge used mice to model the impact that under-nutrition during pregnancy had on the offspring and to look for the mechanisms by which this effect was passed down through the generations. The male offspring of an undernourished mother were, as expected, smaller than average and, if fed a normal diet, went on to develop diabetes. Strikingly, the offspring of these were also born small and developed diabetes as adults, despite their own mothers never being undernourished.

Professor Anne Ferguson-Smith, from the Department of Genetics at the University of Cambridge, says: “When food is scarce, children may be born ‘pre-programmed’ to cope with undernourishment. In the event of a sudden abundance in food, their bodies cannot cope and they can develop metabolic diseases such as diabetes. We need to understand how these adaptations between generations occur since these may help us understand the record levels of obesity and type 2 diabetes in our society today.”

To see how this effect might be passed on, the researchers analysed the sperm of offspring before the onset of diabetes to look at the methylation patterns. They found that the mouse’s DNA was less methylated in 111 regions relative to a control sperm. These regions tended to be clustered in the non-coding regions of DNA – the areas of DNA responsible for regulating the mouse’s genes. They also showed that in the grandchildren, the genes next to these methylated regions were not functioning correctly – the offspring had inherited a ‘memory’ of its grandmother’s under-nutrition.

Unexpectedly however, when the researchers looked at the grandchild’s DNA, they found that the methylation changes had disappeared: the memory of the grandmother’s under-nutrition had been erased from the DNA – or at least, was no longer being transmitted via methylation.

“This was a big surprise: dogma suggested that these methylation patterns might persist down the generations,” adds co-author Mary-Elizabeth Patti, M.D., Director of the Joslin Genomics Core and Director of the Hypoglycemia and Severe Insulin Resistance Clinic at Joslin, and Assistant Professor of Medicine at Harvard Medical School. “From an evolutionary point of view, however, it makes sense. Our environment changes and we can move from famine to feast, so our bodies need to be able to adapt. Epigenetic changes may in fact wear off. This could give us some optimism that any epigenetic influence on our society’s obesity and diabetes problem might also be limited and/or reversible.”

About the University of Cambridge

The mission of the University of Cambridge is to contribute to society through the pursuit of education, learning and research at the highest international levels of excellence. To date, 90 affiliates of the University have won the Nobel Prize.

Founded in 1209, the University comprises 31 autonomous Colleges, which admit undergraduates and provide small-group tuition, and 150 departments, faculties and institutions.

Cambridge is a global university. Its 19,000 student body includes 3,700 international students from 120 countries. Cambridge researchers collaborate with colleagues worldwide, and the University has established larger-scale partnerships in Asia, Africa and America.

The University sits at the heart of one of the world’s largest technology clusters. The ‘Cambridge Phenomenon’ has created 1,500 hi-tech companies, 12 of them valued at over US$1 billion and two at over US$10 billion. Cambridge promotes the interface between academia and business, and has a global reputation for innovation. www.cam.ac.uk