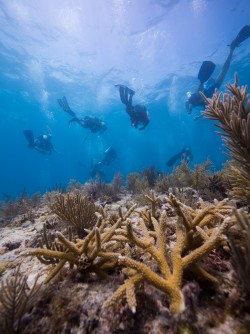 Mote Marine Lab scientists restore staghorn corals in 2015 in the Florida Keys with volunteer helpers from the Combat Wounded Veteran Challenge and SCUBAnauts International. On Sept. 12, 2016, Mote signed a one-year agreement with The Nature Conservancy toward a proposed 15-year initiative to restore corals at unprecedented scales in the Florida Keys and Caribbean.

Newswise — MIAMI, Florida - Mote Marine Laboratory and The Nature Conservancy are partnering on a coral conservation initiative that will enable coral restoration at unprecedented scales throughout the Caribbean and the Florida Keys. The collaboration officially began Monday evening, Sept. 12, 2016, in Miami, with the signing of a one-year memorandum of understanding (MOU), enabling the first steps in a proposed 15-year initiative of joint coral reef restoration and conservation efforts. The goals of the initiative are to restore more than one million corals across the region’s reefs, share science-based coral restoration and conservation practices among U.S. and international Caribbean partners, and construct necessary facilities such as coral gene banks, which preserve genetically diverse coral tissue and help researchers find strains resilient to environmental change. The Sept. 12 MOU will officially launch one year of planning and preparation, which will include growing 50,000 coral fragments. Coral reef systems help provide shoreline resiliency that protects coastal communities and create vibrant, healthy oceans for the people that depend on them. Ocean acidification, increasing ocean temperatures as a result of climate change, overfishing, unplanned coastal development and other associated stressors including waste water have damaged or decimated reefs around the world. Coral cover in Florida and the Caribbean has declined by 50 to 80 percent in some areas in just the last three decades. “As global challenges to the long-term sustainability of coral reefs intensify, so must our efforts to understand and address them,” said Dr. Michael P. Crosby, President & CEO of Mote. “The basic and transformative research that Mote conducts is vital, but we also have a responsibility to translate and transfer the findings of our science into positive ecological, societal and economic impacts. Proactively restoring reefs at a regionally strategic scale, combined with establishing a network of coral gene banks to safeguard essential biodiversity, is unprecedented and allows for all three benefits: helping replenish some of the ocean’s most biodiverse ecosystems, educating and involving communities that are intimately linked to them, and preserving livelihoods — the billions of dollars generated by reef-related economic activity.” Mote — an independent, nonprofit marine science and education institution of five campuses from Sarasota, Florida to the Florida Keys that conducts diverse research programs around the world — has developed innovative technologies to grow staghorn, brain, boulder and star coral fragments and planted approximately 20,000 of them onto depleted reefs in the Florida Keys. In early 2017 Mote plans to open a new coral reef research and education facility at its Summerland Key campus, where Mote scientists have already pioneered groundbreaking methods to restore reef-building corals at accelerated rates and begun to genetically identify staghorn coral strains for potential resilience against threats. “We are accountable to future generations for securing the very resources that have helped us and generations before us to thrive,” said Dr. Luis Solórzano, Executive Director of The Nature Conservancy’s Caribbean Program. “With the threats of climate change, unsustainable development, overfishing and pollution, this partnership between The Nature Conservancy and Mote Marine Lab offers hope for the future of coral reefs and the systems they support. It is our imperative to engage leading scientists, advance innovative coral restoration practices and work collaboratively in order to safeguard these critical ecosystems.”

“Coral reefs are critical ecosystems for sustaining the integrity of our marine habitats, natural resources and species, as well as for protecting our coastal areas. The decline of our coral reef systems from climate change and other human related impacts has serious consequences to the health and well-being of people and nature and requires that we take bold actions to transform the rate and scale of coral conservation,” said Temperince Morgan, Director of The Nature Conservancy in Florida. "We are excited to be joining forces with our Caribbean Program and Mote to step up to this challenge in an unprecedented way by applying our extensive experience in coral restoration to further develop and apply the science needed to conserve one of the most valued and threatened marine habitats in the world.” The Nature Conservancy is an international conservation organization working to protect the lands and waters on which all life depends. Throughout the Caribbean and Florida, the Conservancy has worked with their partners to advance science-based conservation actions that include establishing coral nurseries and planting over 15,000 coral colonies from the nurseries onto reefs over the past 12 years in the Florida Keys, Dry Tortugas and U.S. Virgin Islands. These coral nurseries span from the Florida Keys all the way down to Grenada and are part of the largest restoration project of its kind. By combining forces, two of the world’s foremost independent marine research and conservation organizations will launch an innovative, international coral reef restoration initiative, giving Caribbean and Florida Keys coral reefs a better chance to survive and deliver ecological and economic benefits to future generations.Key goals for the one-year agreement and onward

-Now through September 2017: The one-year MOU will help Mote and Conservancy staff secure additional coral restoration permits, plan their reef restoration initiative for the coming years, fundraise collaboratively and grow approximately 50,000 fragments of various coral species at Mote’s facilities in the Florida Keys and the Conservancy’s facilities in the U.S. Virgin Islands. Partners will focus on selecting coral strains resilient to increasing water temperatures, ocean acidification and disease. In early 2017, Mote will enhance these efforts by opening its new coral reef research facility on Summerland Key.

-By 2020: A networked coral gene bank of threatened Caribbean and Florida coral species will be established and accumulate genetically identified coral tissue samples as “insurance” against climate change and near-term catastrophic events for reefs, such as widespread bleaching, diseases and oil spills. Efforts will include enhancing or expanding coral nurseries and adding gene banks to Mote and Conservancy facilities in Florida and the U.S. Virgin Islands, respectively. Mote and Conservancy staff will forge and advance international partnerships for upcoming coral restoration in priority locations including Cuba and the Bahamas.

-By 2025: Mote and Conservancy staff plan to work with U.S. and international partners to restore corals at unprecedented rates for the Caribbean and the Florida Keys. Goals include planting one million coral fragments in the U.S. Virgin Islands and the Florida Keys and 500,000 in at least three other Caribbean nations. The partners aim to establish a new, permanent coral restoration facility in St. Croix to be jointly operated by Conservancy and Mote staff. They will also complete training of key local personnel working at U.S. and international coral restoration areas, and in the process, disseminate state-of-the-art coral science, conservation and restoration practices around the Caribbean.

Mote and the Conservancy will work together and leverage their ongoing research and community engagement programs to secure the philanthropic investments needed to implement these innovative programs for restoring coral reefs and engaging local communities to lead in these efforts.

Mote is already working with middle- and high school students in its Coral Research and Conservation Program that the Lab spearheaded with EARTHANGLE Inc. Now, the MOU between Mote and the Conservancy will help expand this program, with the ultimate goal of educating and engaging more students and their communities in coral reef conservation and restoration activities in the U.S. Virgin Islands and Florida Keys. Support coral reef restoration and research