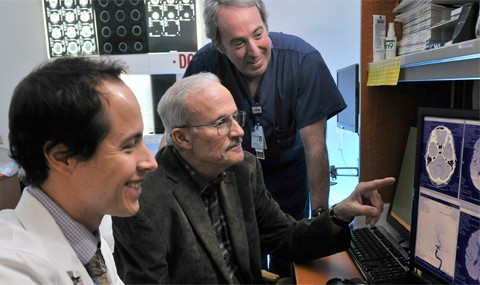 Newswise — DALLAS – May 7, 2014 –Tom Guynes considers himself a living miracle. He’s been treated for a typically fatal form of fast-spreading cancer, congestive heart failure, and a hernia all in the past two years. So when he suffered a stroke the morning of Nov. 24, 2013, both he and his wife Nan feared the worst. “I’m just thankful that I came here,” Mr. Guynes said. “The people at UT Southwestern Medical Center have done wonders, and I think my life has been saved several times here.” Mr. Guynes, 68, of Farmersville, Texas, credits the fast action and coordination of the stroke team at UT Southwestern with minimizing damage to his brain from the stroke and, most importantly, saving his life. The perfect harmony of rapid evaluation, testing, and expert treatment for Mr. Guynes’ stroke that took place that day put into action protocols developed as part of UT Southwestern’s recent certification as an Advanced Comprehensive Stroke Center, the first and only such center in North Texas. This recognition by The Joint Commission is the highest level of certification for stroke care. His treatment also utilized a new telemedicine program in which UT Southwestern specialists advise partner hospitals, in this case a hospital in McKinney, on the best treatment for stroke patients. “We partner with other hospitals and provide services to the patients with complex conditions who are transferred here, such as Mr. Guynes,” said Dr. Jonathan White, the neurosurgeon who performed the procedure. “We work as a multidisciplinary team to provide the absolute best possible outcome patients can have.” An endovascular procedure that only a few stroke centers in Texas are qualified to do was recommended by the vascular neurologist who evaluated Mr. Guynes, Dr. Alejandro Magadan, Assistant Professor of Neurology & Neurotherapeutics. Dr. Magadan thought Mr. Guynes was an excellent candidate for removal of his blood clot through a procedure that involves sucking out the clot with catheter-based surgical tools to restore blood flow to the brain. “On a CT scan, I saw that he had a clot that would lead to a large stroke. His clinical exam suggested a smaller stroke, but the location of the clot meant his stroke would continue to expand to two-thirds of the left side of his brain, causing a very severe and disabling stroke,” said Dr. Magadan. “Our goal was to keep the stroke from getting bigger, and that is what we did.” Not only was stroke damage minimized, but Mr. Guynes’ quick recovery and lack of permanent disabilities amazed the neurosurgical team. “Immediately after we got the clot out, he could lift his arm and leg, which had not been moving. It’s usually not like that. This was just unbelievable,” said Dr. White, Professor of Neurological Surgery and Radiology. “This is a miracle story. The procedure worked perfectly.” The endovascular procedure, which has been in use just five years, was one of an estimated 200 such surgeries that Dr. White has done at UT Southwestern. It is one of the options for stroke patients who arrive outside of the 4.5-hour window for treatment with tPA, a drug that dissolves blood clots. “Mr. Guynes’ only other option would have been to keep his blood pressure under control, give him some aspirin, and hope that part of his brain didn’t die,” said Dr. White. Although the procedure has been shown to improve outcomes in only 30 percent of patients, based on national studies, the research and surgical expertise of UT Southwestern improved those odds. Studies by Dr. Magadan indicated Mr. Guynes would be a perfect candidate for the surgery, and he was. Despite the risks of the surgery, Mr. Guynes has no regrets. After all, he has beaten the odds and fought a rare form of blood cancer called amyloidosis into remission with the help of Dr. Larry Anderson, Assistant Professor of Internal Medicine and member of the UT Southwestern Bone Marrow Transplantation/Hematologic Malignancies Clinic. In addition, his cardiomyopathy (a disease of the heart muscle that causes it to pump poorly) that was induced by the amyloidosis has been successfully stabilized by Dr. Pradeep Mammen, Associate Professor of Internal Medicine and a member of the UT Southwestern Heart Failure, Left Ventricular Assist Device and Cardiac Transplant Program. Although he is at risk for another stroke and the return of cancer, neither of these possibilities has stopped Mr. Guynes from enjoying life. That includes spending time with his wife of 46 years, his four grown children, and eight grandchildren. The retired truck driver is active in his local church as a Sunday School teacher and is a member of the Christian Motorcycle Association. “It’s my biggest passion next to my wife,” said Mr. Guynes of motorcycle riding. “It’s just something I love to do, enjoying the freedom, the wind in my face.” Given his health issues, Mr. Guynes has slowed down just a bit. When asked if he’s ready to get back on his motorcycle, he responds without hesitation in spite of his wife’s disconcerted look. “I’m going to do it anyway,” he said. “I think Nan’s just a little bit gun-shy.” In many ways, Mr. Guynes has been given several new leases on life. For that, he credits UT Southwestern, and his faith in God. “What those doctors pulled off that morning, some think I shouldn’t have survived,” he said. “So, I think I’m doing pretty good.”