Insulin Gives an Extra Boost to the Immune System 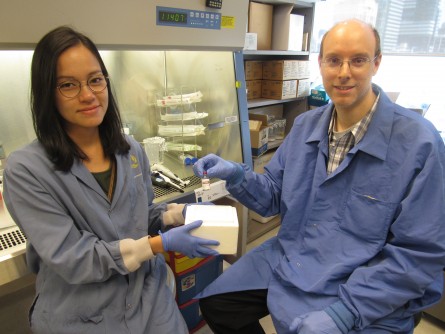 Dr. Sue Tsai, postdoc fellow, and Dr. Dan Winer, Toronto General Hospital Research Scientist, get ready to test the effects of insulin on the immune system – a novel link which may have implications for vaccine development and inflammatory illnesses in the future.

Newswise — (Toronto – August 30, 2018) – The role of insulin as a boost to the immune system to improve its ability to fight infection has been detailed for the first time by Toronto General Hospital Research Institute (TGHRI) scientists.

TGHRI scientists have identified a specific insulin signaling pathway that, when activated, revs up the response of T cells in the immune system to divide rapidly and secrete cytokines, chemical messenger proteins that activate the rest of the immune system. A fast and effective immune response protects us against disease and life-threatening infections by destroying infected cells or microbes, while a wrong or inefficient one can cause immune system disorders or diseases to develop.

“We have identified one of metabolism’s most popular hormones, specifically the insulin signaling pathway, as a novel ‘co-stimulatory’ driver of immune system function,” says Dr. Dan Winer, who is also Assistant Professor, Department of Laboratory Medicine and Pathobiology at University of Toronto. “Our work characterizes the role of this signaling pathway in immune cells, mainly T cells, opening up avenues in the future to better regulate the immune system.”

Although much work has been done in past years on the role of insulin in organs such as the liver, muscle and in fat to understand regulation of glucose or blood sugar and how the body metabolizes or turns it into energy, little is known about how insulin impacts the immune system.

“The link between insulin and the immune system is not obvious,” says Dr. Tsai, “it is fascinating to learn that immune cells, which require energy and nutrients for proper functioning just like all other cells in the body, are also regulated by metabolic signals from insulin.”

The suggestion to test this link came to the research team as a result of the observation that people with type 2 diabetes or who are obese, and at higher risk for developing type 2 diabetes, do not respond well or are resistant to insulin. In their previous work, the Winer labs demonstrated that immune cells inside abdominal fat cause the release of ‘pro-inflammatory’ chemicals, which make the body less sensitive to insulin.

It may be, she reasons, that there is a link between persistent and chronic inflammation, immune dysfunction and insulin resistance, with the end result that T cells stop responding and become functionally impaired.

The goal of this research was to study how insulin regulates T cell function and what causes T cells to stop responding to insulin, Dr. Tsai says, adding that T cells were chosen because they play a pivotal role in self-defense against infections.

Using genetically engineered mice, the research team designed mice with T cells that did not have an insulin receptor on them, mimicking insulin resistance. They then observed what happened to the T cells in the mice under different stressors, such as the H1N1 flu virus.

T cells need more signals to boost their activation after they encounter a foreign invader, explains Dr. Winer, adding that, “the insulin receptor or signaling molecule is like a second push to the immune system to ensure that it can fight off the infection with the best possible weapons it has.”

Without the added boost or kickstart provided by the insulin receptor to help “re-energize” the T cells to mount an effective immune response, the T cells failed to destroy viruses such as the H1N1 influenza.

“T cells are at the heart of so many diseases,” says Dr. Tsai, “If we can understand them at the cellular level, this will give us the best opportunity to find new pathways to target for new therapies.”

In the future, she says, we could harness this insulin signaling pathway to either boost the immune response to create vaccines, for example, or dampen it to heal inflammatory illnesses such as arthritis, ulcerative colitis and Crohn's disease.

The work was funded by the Canadian Institute of Health Research, Diabetes Canada, the J.P. Bickell Foundation Grant, the Banting and Best Diabetes Centre at the University of Toronto, and the Toronto General & Western Hospital Foundation.

Toronto General Hospital is a partner in University Health Network, along with Toronto Western, the Princess Margaret Cancer Centre, the Toronto Rehabilitation Institute and the Michener Institute for Education. The scope of research and complexity of cases at Toronto General Hospital have made it a national and international source for discovery, education and patient care. It has one of the largest hospital-based research programs in Canada, with major research in cardiology, transplantation, diabetes, regenerative medicine, infectious diseases, genomic medicine, psychosocial care and health systems. Toronto General Hospital is a research and teaching hospital affiliated with the University of Toronto. www.uhn.ca