Intelligence Beyond His Years: 12-Year-Old Heads to Ivy League School 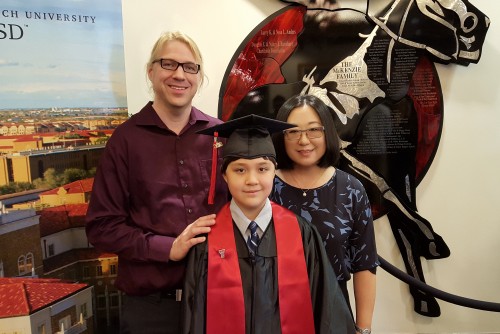 Photo Courtesy of the Shuler family.

Jeremy Shuler with his parents, Andy and Harrey, at his high school graduation at Texas Tech University Independent School District

Newswise — Sitting across the room is a young boy playing Minecraft talking to his mom and dad in their Grand Prairie home. He’s swinging his legs back and forth while sitting in the chair and bouncing around energetically. He’s giddy and full of life, just like any other kid at his age.

His favorite things are reading books like the “Divergent” series, “Diary of a Wimpy Kid,” math books, watching “Cosmos” and traveling with his family.

Although he appears to be an average, everyday kid, there is nothing average about him. His name is Jeremy Shuler, and he is about to embark on an adventure only a rare number of kids his age has done before.

Just a few months ago he visited Texas Tech University for a graduation. No, it wasn’t for an older brother or sister; it was for him. At just 12 years old he graduated with his high school diploma from Texas Tech University Independent School District (TTUISD), a flexible online education program that allows K-12 students to earn credits at their own pace.

His new adventure, you ask?

Well, he’s going to college this fall but not just any college.

Early-developerThe son of two aerospace engineers, Jeremy was a good, curious baby and began reaching his milestones a lot quicker than the average infant.

When he was 2 he had learned both the Korean and English languages and could read books all on his own. About the time he was 8 years old, he was working on high school curriculum.

Harrey, his mother who quit her career to focus on Jeremy, said it was difficult to keep Jeremy challenged academically due to how quickly he was able to learn things.

“Early on we realized Jeremy wasn’t really ordinary,” said Harrey. “We briefly considered sending him to a charter school or a school for the gifted and talented, but in the end there wasn’t much of a choice because he was way too advanced to be enrolled in any traditional schools. So I quit my career to dedicate my time to teaching Jeremy myself. I have been homeschooling him ever since.”

While homeschooling Jeremy, Harrey, who has her doctorate in aerospace engineering from the University of Texas-Austin, assisted him in his studies, but there were some courses she didn’t have to assist him with.

One of those courses was chemistry, which Jeremy taught to himself.

At the age of 11, Jeremy had completed all of his high school courses and was ready for the next stop on his education journey: college. The only problem though was that he needed a high school diploma or a GED, but due to his age he couldn’t get his GED because he wasn’t 18.

His father, Andy, and Harrey knew they needed to figure out a way to move Jeremy on to his college education because there wasn’t much they could do for him anymore. When they began researching other education programs, they stumbled upon TTUISD.

Finishing high school with TTUISDJeremy and his family traveled a lot due to Andy’s job with Lockheed Martin as an engineer, which is why homeschooling worked so well with their lifestyle. When Andy and Harrey began searching for another high school program, they thought TTUISD would be a good fit as it would continue to work with their “on-the-go” lifestyle.

“When we were looking at different programs we wanted some place that would acknowledge his achievements already so he wouldn’t have to go through several years of learning the same things over and over again,” Harrey said. “When I looked at TTUISD, their curriculum had more variety, offered the flexibility we wanted for travel and recognized the work Jeremy had already completed.”

“I contacted Lisa a lot, especially when it came time for Jeremy to apply to colleges,” Harrey said. “During Jeremy’s time at TTUISD, we talked to her so much over the phone and through email, but had never met her and the other TTUISD staff until Jeremy’s graduation. It was a good experience, because we felt like we had already known them even though we had never met them before.”

From courses to credit by exams and applying for college, Stone and other TTUISD staff helped the Shuler family through it all.

“Jeremy’s intelligence and passion for learning is truly inspirational,” Stone said. “I feel honored I was able to play a small part in Jeremy’s academic journey, and I really enjoyed working with such a special family.”

The two years Jeremy was enrolled at TTUISD, he said, was a good experience that made him a better person.

Some of the courses called for a lot of writing, which ended up helping Jeremy prepare for college as he enjoys math and science way more than English and writing.

His favorite part about TTUISD was walking across the stage at graduation.

“I loved graduation,” he said. “It was cool seeing all of the other students graduating alongside me and meeting all of the TTUISD people.

“I really enjoyed TTUISD because it allowed me to get an actual high school diploma to be able to go to college, but it had the flexibility we needed for me to finish school. Overall, it made me a lot more experienced and prepared me for college.”

From young boy to Ivy League studentAt the age of 10, Jeremy began preparing for college by taking the SAT and advanced placement (AP) exams. Jeremy took the SAT exams in 2014, placing in the 99.6 percentile for all college-bound seniors that year. Andy and Harrey said Jeremy did better than they expected, but his elite-level success was one of the reasons they thought he was ready for college in the near future.

Jeremy also took seven AP exams and aced them all, receiving college credit in calculus, chemistry, mechanics, electricity and magnetism, statistics, microeconomics and macroeconomics. He was awarded AP Scholar with Distinction from the College Board for his effort in the seven exams.

In the fall of 2015, Jeremy began applying to various schools, including Cornell University, where Andy earned an engineering degree. Prior to his acceptance, Jeremy had a video interview with the Director of Engineering Admissions and the Assistant Dean for Student Services in Engineering. He was admitted to Cornell Engineering in March through the regular admissions process with special consideration given to his level of maturity and with the condition that his parents move to Ithaca to live with him.

“I was excited when I found out I got accepted to Cornell,” Jeremy said. “It is the best choice for me.”

When the acceptance letter came, Andy and Harrey were grateful to the university for being willing to take the chance on a 12-year-old boy.

“We have accepted Jeremy into our undergraduate program here at Cornell Engineering,” he said. “He is a very advanced student for his age who already has demonstrated an incredible ability to learn at the collegiate level.

“While this is highly unusual, we feel that with the strong support of his parents – who will be moving here to provide him a place to live and study – and his unusual talents and thirst for knowledge, he will be able to thrive as an engineering student and take advantage of all that Cornell has to offer.”

Though some people may be concerned about letting their kids go to college, no matter the age, Andy said it was time for Jeremy to go to college as Cornell will give him the chance to grow.

“He got through all of the math we could teach him by the time he was 10,” Andy said. “The chance for him to learn advanced math and physics will be really great to see. We love to see him grow, be challenged and excited about learning.

“It will be a change though. He will have to realize that he may not be the smartest person in the classroom anymore, but that will help him grow. If he’s up for the challenge, I think it will be good for him.”

Going to college doesn’t mean Jeremy will be living the life of an average college student. Due to his age, he will be required to live at home throughout his college years.

Thankfully, Lockheed Martin has a branch near Ithaca, so the family was able to transfer Andy’s job from Texas to New York easily. The Shulers have plans to live close to campus so Jeremy will be able to walk to and from class every day.

Following in his parents’ footsteps, Jeremy plans to major in applied and engineering physics and minor in mathematics. For the fall semester he plans to take courses in multivariable calculus, physics in mechanics and spatial relativity, Introduction to Computing with MATLAB and introduction to linguistics or intermediate Latin, depending on his Latin placement test result.

One of the things he’s most excited about, though, is the food at Cornell.

“We’ve been to Cornell a few times, visiting family, and their food is good, which is very important,” Jeremy said with a giggle. “I’m also excited to learn new things and make new friends. Cornell will be different, though, especially in the first few weeks as I’ll need help to navigate campus and get used to life at school because I’ve been homeschooled my whole life.”

Sticking to his love for math and physics, Jeremy plans to pursue academia for his career. He will have graduated with his doctorate degree before he turns 21; that’s normally the time people earn a bachelor’s degree.

Not only is he focusing on college right now, he’s also working to develop a radar signal encoding algorithm using Costas Array based on Sophie Germain prime numbers.

“I think Jeremy is pretty confident in himself and knows he’s not like other kids,” Harrey said. “But I think he accepts that. Being different isn’t bad; it’s just different. We want him to be happy and proud of whatever he eventually chooses to do with his life. My word of advice: don’t try to mold your kids to what you think your kids should be.”

Andy added how proud he and Harrey are of Jeremy.

“He has worked very hard and it’s been a very interesting experience watching him grow up with us,” he said. “We’re just excited he has an opportunity to learn, grow and do what he’s passionate about.”

Preparing to be in the class of 2020, Jeremy is spending the rest of his summer getting ready for his first semester at Cornell while still enjoying his free time with his family.