Intelligent gel attacks cancer This new injectable “biogel”, developed by researchers at the University of Montreal Hospital Research Centre (CRCHUM), is effective in delivering anti-cancer agents directly into cancerous tumours and killing them. The compound is made from chitosane, a biodegradable material extracted from the shells of crustaceans, to which gelling agents are added. The results of that study have been published recently in Biomaterials. 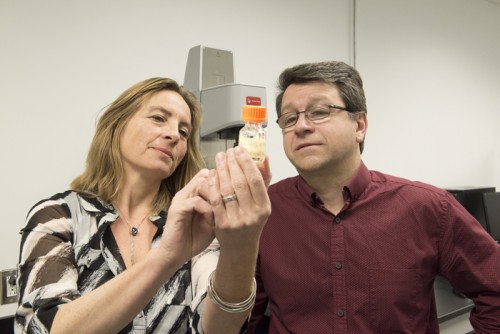 Newswise — A new injectable “biogel” is effective in delivering anti-cancer agents directly into cancerous tumours and killing them. This technology, developed by researchers at the University of Montreal Hospital Research Centre (CRCHUM), has already been successfully tested in the laboratory. If it works in patients, the therapy could one day revolutionize treatment for many forms of cancer.

Unlike “jello,” the biogel is liquid at room temperature and gels at 37 degrees Celsius – human body temperature. "The strength of this biogel is that it is compatible with anti-cancer immune cells. It is used to encapsulate these cells and eventually administer them using a syringe or catheter into the tumour or directly beside it. Instead of injecting these cells or anti-cancer drugs throughout the entire body via the bloodstream, we can treat the cancer locally. We hope that this targeted approach will improve current immunotherapies,” said Réjean Lapointe, co-author of a study on the technology that was recently published in Biomaterials.

One form of immunotherapy involves treating cancer patients with anti-cancer immune cells. This is called adoptive cell therapy. These cells (T lymphocytes or T cells) are produced naturally by the body and have the ability to destroy cancer cells, but they are generally too weak and too few to eradicate the cancer alone. T cells are therefore cultivated in the laboratory – often the patient’s own cells – and then reinjected into the patient’s blood. While this form of immunotherapy has shown promising results in cases of advanced cancer, it is not always possible to generate enough T cells. Moreover, high doses of interleukin-2, a hormone added to maximize the therapy have a toxic effect. “With our technique, we only need to administer a few dozen million T cells, instead of the billions currently required. We can also administer compounds that ‘awaken’ the immune system to fight against cancer,” explained Lapointe, who is a researcher at the CRCHUM and professor at the University of Montreal.

The recipe for this promising biogel was developed by Sophie Lerouge, a researcher at the CRCHUM and professor in the Department of Mechanical Engineering at the École de technologie supérieure. “The compound is made from chitosane, a biodegradable material extracted from the shells of crustaceans, to which gelling agents are added. “The formulation is liquid at room temperature, which facilitates its injection, but quickly takes on a cohesive and resistant structure at 37 degrees. We also needed a hydrogel that was non-toxic for the body and provided excellent survival and growth of the encapsulated cells," said the engineer. A real challenge for Lerouge’s team, who tested several formulations before arriving at this “intelligent” biogel.

The biogel was successfully tested in several in vitro models, including melanoma and kidney cancer. “The T lymphocytes in the gel are functional and can grow for two to three weeks, be released from the gel, and kill the cancerous cells,” explained Lapointe. The next step is to demonstrate the effectiveness of the biogel in animals and humans. If the trials are successful, this new approach could be added to current cancer therapies in a few years.

About the studyThe study “Chitosan thermogels for local expansion and delivery of tumor-specific T lymphocytes towards enhanced cancer immunotherapies” was published online in the journal Biomaterials in October 2015. Réjean Lapointe is funded by the Canadian Cancer Society Research Institute, the Kidney Foundation of Canada, the ThéCell cell therapy network, and the Fonds de recherche du Québec – Santé (FRQS). His laboratory is located at the CRCHUM’s Montreal Cancer Institute. The other authors of the study are Anne Monette, Caroline Ceccaldi, and Elias Assaad. The biogel described in this study has been submitted for patent protection by the research commercialization firm Aligo Innovation. For more information, see the study: www.sciencedirect.com/science/article/pii/S014296121500825X