Intelligent Scarecrow Can Save Aquaculture from Financial Losses 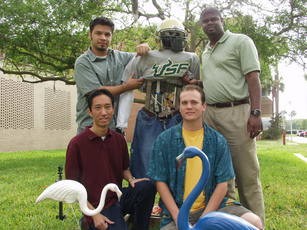 Newswise — The Erebus Scarecrow " designed by USF computer science students to protect both the investment of aqua-farmers and the lives of birds that may prey upon their fish " does not, unlike the scarecrow of Oz fame, have a "head all full of stuffing." Erebus has a head all full of sophisticated but relatively low cost sensors, cameras and other hi-tech computer components that will keep predator birds away from fish farm ponds without harming the birds.

Erebus was born in the USF College of Engineering as just one of the novel projects during this semester's Senior Project in USF professor of computer science Ken Christensen's class. Every semester, the Senior Project class tackles five to six creative problems, many contributed by local companies. This year, Albert Ng, Jimal Ramsmooj, Francisco Blanquicet and Scott Werner had the fish farming-scarecrow brain storm and employed an "eBox" donated by Microsoft and sprinkler equipment donated by Contech.

"Aquaculture, also known as fish farming, is a vital part of the world's fish production and a $40 million business in Florida," said Christensen. "The outdoor farms are susceptible to predator birds. The students' intelligent scarecrow is designed to benefit farmers while protecting predator birds - many of which are protected species - from harm."

Its the head stuffing that makes Ereubus who he is.

"The Erebus Scarecrow is not just another motion-detector," said student Albert Ng. "He is capable of intelligent detection, deterrence and can also record the events."

Standing guard 24/7 in a USF football uniform, the smart scarecrow detects motion and then use its cameras and image processing software, running in an eBox "micro PC," to discriminate between intruders and non-intruders using programmed color recognition. Erebus is "armed" with a speaker system that blasts 120 decibels of gunshot sound and hits predator birds with high speed but harmless streams of water. Not one to keep secrets, Erebus can email the user or call a user's cell phone to report an intrusion.

Fish farmers working around their ponds can wear an orange vest to identify themselves as "friendlies."

The USF computer science wizards designed and tested Erebus in the lab. But would he work pond-side? To find out, students let their fingers do the walking and, using the Yellow Pages, they "cold called" several fish farmers in the greater Tampa Bay area. A fish farmer who said he loses fish to birds everyday and, overall, perhaps three or five percent of his stock annually to birds, saw the possibilities and let them test Erebus on his fish farm.

The computer science students who participated in the project also suggest that a system like Erebus could be extended beyond fish farming to protect orchards and vineyards where farmers experience similar problems with deer, black bears and other neighbors.

"Given the low cost and the environmentally-friendly nature of the Erebus Scarecrow, it has the potential to become very attractive to fish farmers," predicted Christensen.

The University of South Florida is one of the nation's top 63 public research universities as designated by the Carnegie Foundation for the Advancement of Teaching. USF received more than $287 million in research contracts and grants last year, and it is ranked by the National Science Foundation as one of the nation's fastest growing universities in terms of federal research and development expenditures. The university has a $1.3 billion annual budget and serves nearly 43,250 students on campuses in Tampa, St. Petersburg, Sarasota/Manatee and Lakeland. In 2005, USF entered the Big East athletic conference.