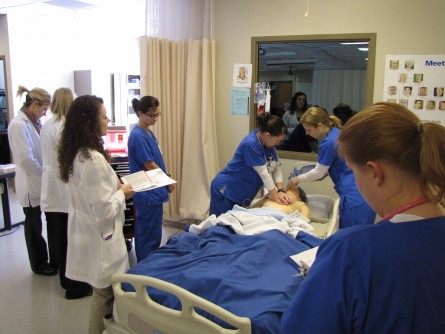 Students from the South Dakota State University College of Nursing (in blue scrubs) and the College of Pharmacy (in white lab coats) respond during a code blue simulation at Sullivan Health Science Center in Sioux Falls. The exercise trains students to work as a part of a health care team. 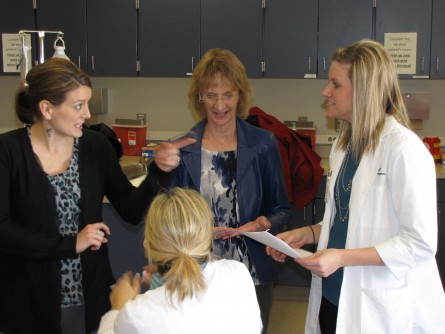 Newswise — Students in various health care fields take their unique routes into the profession, but once employed, they all arrive at the same patient.

Nurses, doctors, pharmacists and therapists can’t perform proficiently on the same team if they never been on the team before. “When I was a student, nobody told me about my role in a team. I learned it slowly through years of practice,” said Debra Farver, professor of pharmacy practice at South Dakota State University. Education in isolation is a fading philosophy and Farver is helping usher in an era of interprofessional education.

Partnering on interprofessional exercisesInterprofessional education is coordinated exercises between a variety of health care students. They still have separate curriculums and course requirements, but in response to directives from accreditation entities each academic health field now is partnering more with colleagues in related fields.

SDSU Pharmacy started interprofessional education in formalized activities in 2012. The activities since have become more widespread and complex, said Farver, who practices in Yankton. They culminate with case studies in simulation labs.

Reacting to code blue Farver and Meyer were on hand for a spring semester code simulation using a high-tech, talking mannequin at the Sullivan Health Science Center in Sioux Falls involving pharmacy students and graduate and undergraduate nursing students, all from SDSU.

The mannequin suffered a heart attack while hospitalized.

Two undergraduate nursing students were already attending to Jackson, who had complained about shortness of breath and soon went into cardiac arrest. The mannequin can not only be programed to talk, but his vital signs can also be manipulated.

When the students made the code call, other nursing students and the pharmacy students responded.

In their role play, pharmacy students prepared medications to be given intravenously that were ordered by the nurse practitioner student, reviewed the patient’s case for drug related problems and assisted the nurse practitioner with the cardiac arrest algorithms. The nursing students performed cardio-pulmonary resuscitation, gave electrical defibrillation, administered medications and charted each activity.

They went through the exercise twice, applying life-saving pointers that were pointed out between sessions.

Farver said the programs added code simulations to their interprofessional education in spring 2013. Students now are “more prepared to be an effective team member, an effective communicator and understand their role and responsibilities.

“We also have students learn more about the pharmacology and the diseases by doing these simulations,” Farver said.

“Students are more comfortable with their recommendations after doing this. We’re used to having the doctor or physician assistant take charge, but this gives them an opportunity to see that everybody might have a good idea and we should discuss it,” she added.

About the College of PharmacyThe College of Pharmacy offers three degree programs: the Doctor of Pharmacy (Pharm.D.) the Ph.D. in Pharmaceutical Sciences, and the B.S. in Medical Laboratory Science. The main office for the College is located in the Avera Health and Science Center on the South Dakota State University campus in Brookings. The Department of Pharmacy Practice is based in Sioux Falls, South Dakota, at University Center North. The department has faculty in Brookings, Fort Meade, Hot Springs, Rapid City, Sioux Falls, Watertown, and Yankton. These faculty teach Pharm.D. courses, precept students on Advanced Pharmacy Practice Experiences (APPE), and provide pharmacy services at health systems throughout the state. 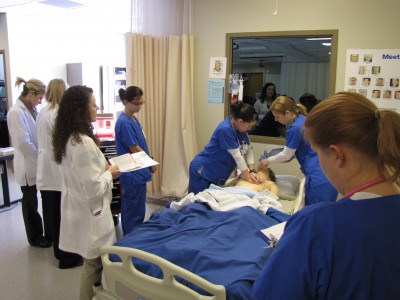 Caption: Students from the South Dakota State University College of Nursing (in blue scrubs) and the College of Pharmacy (in white lab coats) respond during a code blue simulation at Sullivan Health Science Center in Sioux Falls. The exercise trains students to work as a part of a health care team. 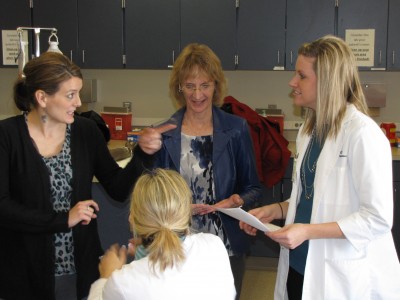