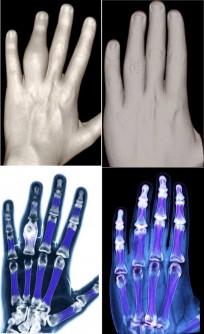 Images of patient with an osteoid osteoma of the finger before and after treatment with focused ultrasound.

Newswise — April 15, 2014 -- Charlottesville, VA – Presentations at the recent symposium of The International Society for Therapeutic Ultrasound (ISTU) demonstrate an increasing body of data supporting the potential of focused ultrasound to transform the treatment of a wide range of diseases. This early-stage, non-invasive technology could be a cost-effective alternative or adjunct to traditional surgery, radiation therapy, and drug delivery to treat conditions such as brain tumors, movement disorders, prostate cancer, and soft tissue tumors. Currently approved in the U.S. for the treatment of uterine fibroids and painful bone metastases, many healthcare experts consider focused ultrasound a disruptive technology to watch.

“Focused ultrasound is increasingly being considered a game-changing technology,” said Kim Butts Pauly, Ph.D., ISTU 2014 Committee Chair and Professor of Radiology, Stanford University School of Medicine. “We are excited to host researchers from many disciplines around the world -- including medical physics, engineering, biomedical science, radiology, oncology, and neurosurgery -- to share significant pre-clinical and clinical progress being made with focused ultrasound.”

The range and depth of scientific presentations at the 2014 ISTU meeting demonstrate the broad applicability of this platform technology to produce multiple biological mechanisms. Focused ultrasound can have therapeutic effect both directly by ablating unhealthy tissue or dissolving blood clots and indirectly, such as by opening up the blood-brain barrier to allow the delivery of therapeutic agents.

“It is critical that the next phase of innovation in focused ultrasound optimizes the potential to treat the most urgent medical needs that will benefit the greatest number of patients,” said Neal F. Kassell, chairman of The Focused Ultrasound Foundation, a major sponsor of the conference. “One revolutionary approach involves using the technology to non-invasively treat problem areas deep in the brain, while bypassing healthy brain tissue and preserving normal functions. The successes in movement disorders point to a very promising future for this powerful tool.”

Several new clinical studies were presented at the symposium, including the following highlights:

Jessica Parsons, Ph.D., Clinical Science Manager at Mirabilis Medica, Inc. presented results of a single-arm pilot study of 37 women treated with their experimental focused ultrasound system prior to hysterectomy. The treatment was delivered using ultrasound imaging guidance with no skin burns or collateral tissue injury. No anesthesia or sedation was required in a large majority of patients. The average total treatment time was 4.9 minutes. This dramatically shorter treatment time was achieved using a shell ablation technique, which involves focusing the ultrasound energy on the outer surface of the target volume to allow thermal and ischemic effects to work in concert. The average non-perfused volume created in the study ranged between 0.6 and 51.3 cc, depending on the treatment parameters used.

Clinical Application of High-Intensity Focused Ultrasound Ablation in Gynecology: Safety AnalysisLian Zhang, M.D., of Chongqing Medical University in China presented a seven-year study evaluating the safety of focused ultrasound treatment of more than 10,000 patients with uterine fibroids or adenomyosis at 10 centers in China. The treatments were very effective, with an average of 80% non-perfused fibroid volume achieved. The treatments were safe, with 13.15% of patients experiencing anticipated minor side effects immediately after the procedure (abnormal vaginal secretion, lower abdominal pain, transient leg or buttock pain, dysuria, vomiting, uterine bleeding, urinary retention or fever). Longer-term side effects (skin blisters, leg or buttock pain, and uterine bleeding) occurred in 0.12%. Major complications, which have previously led to substantial morbidity and disability, did not occur in this study.

Pejman Ghanouni, M.D., Ph.D., Stanford University, shared his experience treating 5 patients with desmoid tumors, rare aggressive benign growths that affect young adults. Five patients with a median age of 17 years were treated. The average treatment time was 4 hours 39 minutes, and no serious adverse events occurred. Complications of the procedures included a small blister, muscle ablation, and acute biochemical pancreatitis that was asymptomatic and self-resolving. Focused ultrasound seems promising for achieving local control of tumor growth with an average of 63% of the tumors ablated after one or two treatments. The procedure was associated with few adverse events compared to surgery or radiation, and it can be repeated without toxicity to normal tissue.

Alessandro Napoli, M.D., Sapienza University of Rome, presented results of a study treating 15 patients with osteoid osteoma, a rare benign tumor causing localized bone pain that affects young adults. The patients were treated with MR-guided focused ultrasound and followed up at 1, 6, and 12 months post-treatment. There were no treatment-related complications. A statistically significant difference was noted between the overall pre- and post-treatment visual analogue scores for pain (8.3 and .6 respectively).

Focused ultrasound is a revolutionary, early-stage therapeutic technology with the potential to transform the treatment of many serious medical disorders. This breakthrough technology uses ultrasonic energy guided by magnetic resonance or ultrasound imaging to treat tissue deep in the body without incisions or radiation. Multiple intersecting beams of ultrasound are directed and concentrated on a target as small as a grain of rice, much like a magnifying glass can focus multiple beams of light on a single point.Focused ultrasound is currently approved in the U.S. to treat uterine fibroids and painful bone metastases, and there are a growing number of clinical applications in various stages of research and development around the world, including Parkinson’s disease, essential tremor, neuropathic pain, breast and prostate cancer, and brain tumors.

ABOUT THE FOCUSED ULTRASOUND FOUNDATIONThe Focused Ultrasound Foundation was created to improve the lives of millions of people worldwide by accelerating the development and adoption of focused ultrasound therapies. The Foundation works to clear the path to global adoption by coordinating and funding research, fostering collaboration among stakeholders, and building awareness of the technology among patients and professionals. The Foundation is dedicated to ensuring that focused ultrasound finds its place as a mainstream therapy for a range of conditions within years, not decades. Since its establishment in 2006, the Foundation has become the largest non-governmental source of funding for focused ultrasound research. More information about the Charlottesville, Virginia-based Foundation can be found at www.fusfoundation.org.