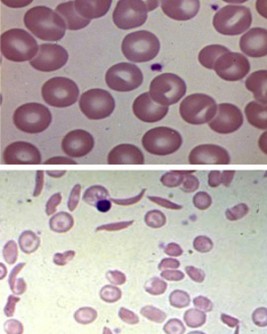 Moving from childhood to adulthood, patients with sickle cell disease rely more on emergency care, according to a new study from Washington University School of Medicine in St. Louis. Normal red blood cells (top) are round and disk-like. The genetic disorder causes many red blood cells to develop an abnormal sickle shape (bottom), making it hard for blood to flow through vessels and carry oxygen to the body. The condition can cause debilitating pain, blindness, strokes and pneumonia.

Newswise — Patients with sickle cell disease rely more on the emergency room as they move from pediatric to adult health care, according to researchers at Washington University School of Medicine in St. Louis.

An analysis of Medicaid data of more than 3,200 patients with sickle cell disease shows that emergency room visits tripled from age 15 to age 24. The research is reported Dec. 10 at the American Society of Hematology’s annual meeting, in Atlanta.

“There seems to be a breakdown in medical care during the transition from childhood to adulthood,” says hematologist Morey A. Blinder, MD, associate professor of medicine. “Not only emergency department usage, but hospitalizations go up during this time as well.”

One possible explanation for the increased reliance on emergency care, according to Blinder, is the relative lack of adult health care providers with experience caring for sickle cell patients. Similar issues are arising for other pediatric diseases, such as cystic fibrosis and hemophilia, which were previously fatal. Over the past few decades, an increasing number of children and teenagers are living into adulthood with these conditions and there often aren’t enough primary care physicians who can provide care for these adult patients.

Sickle cell disease refers to a number of inherited genetic conditions that cause the normally round, disk-like red blood cells to take on a characteristic “sickle” shape. These malformed red blood cells do not carry oxygen to the body as well as healthy cells and are prone to clogging smaller blood vessels. The condition is often painful in places the cells block blood flow. Some of the more severe complications include blindness, strokes and pneumonia.

In the study, researchers examined data of 3,200 Medicaid patients with sickle cell disease from the mid 1990s through 2010. The researchers followed patients from five states (Florida, New Jersey, Missouri, Iowa and Kansas) for an average of six years each and included those moving from pediatric to adult care.

More emergency care and hospitalizations also result in higher overall medical costs. Total health care costs were more than $7,000 higher per quarter for patients making heavier use of the emergency department, even as they tended to spend less on medication, perhaps simply failing to fill prescriptions.

Blinder says the St. Louis region and Missouri in general have good support for adults with sickle cell disease, though this is not always the case nationally.

“In areas without good adult support for this disease, you have to identify adult physicians who would be interested in treating sickle cell patients,” Blinder says. “They could be hematologists or even internists, but in general there are not enough providers for adult sickle cell patients.

“This study highlights an emerging problem in transitioning pediatric age patients to adulthood, and the need to explore new ways to facilitate that process,” Blinder says.

The study was funded by Novartis Pharmaceuticals. Blinder is a consultant for Novartis and receives some research support from the company. Several of the study's co-investigators are employed by Novartis.