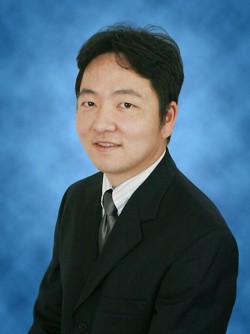 Virginia Tech Associate Professor of Biomedical and Engineering Mechanics reports on a surprising ability of single cell organisms in navigating a maze.

Newswise — In a paper appearing in Scientific Reports today, the motion of micro-organisms as they swim through various types of fluid channels show “quite strange and new” responses for single cell organisms, including the performance of somersaults, meandering wanderings, and even a ballistic type of behavior, wrote Sunghwan “Sunny” Jung, a member of the Virginia Tech Department of Biomedical Engineering and Mechanics.

“We are always seeing aesthetic acrobatic somersaults by athletics, dolphins, or even small fleas. Such twisting somersaults are induced by coordinating the contraction and relaxation of multiple muscle cells, which sounds like a unique feature of multicellular organisms. However, this study shows a surprising phenomenon of how single-cell organisms can somersault or bend their bodies. A trick is that the organisms try to swim through a small channel, so they are wrinkled up,” Jung explained.

Jung’s investigations showed the “complicated nature of the swimming tracks” of the microorganisms as they interacted with various types of fluid environments, ranging from thin to thick.

These findings could impact the study of the thickness of films, used in a wide variety of engineering and scientific applications. Some examples include: drug delivery methods, thin-film solar cells, electronic semiconductors, batteries, optics, biomedical engineering, and much more.

Each of these industries employs the study of microfluidics, the performance, control, and treatment of fluids that are constrained in some fashion. With the recent introduction of a three-dimensional microfluidic device, they are able to customize the shapes of channels and cavities of the devices that fluids pass through. They can manufacture rounded corners, and other customized shapes. And if they understand how the material inside a fluid flows, they can maximize the efficiencies.

So, in the delivery of a medical drug into one’s body, a better understanding of the ways the organisms flow through fluids or films could lead to more efficiency in their remedial benefits. Or, in the manufacturing of materials, when using fluids to build a solid surface, better processes could make cheaper, more stable, and more environmentally benign products.

Researchers such as Jung and his collaborators, Saikat Jana, of Mumbai, India, Aja Eddins, of Orlando, Florida, and Corrie Spoon, of Salem, Virginia, all biomedical engineering and mechanics students, are learning more about the “body deformability” of the micro-organisms and are exploiting this knowledge as they learn how these paramecium, the most ubiquitous ciliary microorganisms in nature, “navigate or escape from the complicated geometries in their habitats,” Jung said.

By a greater understanding and a mimicking of nature, Jung is continually working on improving engineering and scientific processes. Two years ago, he was one of the recipients of a National Science Foundation (NSF) Physics of Living program grant that funds research projects at the interface of biology, mathematical modeling, physics, and engineering.

In that grant, he used water-running lizards’ ability to dart across a liquid surface to learn more about locomotion efficiency. His goal, using the knowledge gained from this grant and new ones, is to develop more efficient bio-inspired systems such as faster dipping and coating processes for materials engineering, or even water-walking robots.

In yet another earlier project, Jung, along with colleagues at MIT and Princeton University, studied how a cat is able to exploit fluid inertia to defeat gravity and pull liquid into its mouth ¬– a finding that has significant implications for the development of novel microfluidic devices.

In his current NSF project, Jung and his students were able to show how microorganisms can “use the flexibility of the body to actively navigate within confined spaces.” They found that in a collision with a wall, the paramecium triggers “avoidance behavior” and it will back up and gyrate its body about a mean position.

“In thin films that have thickness similar to the width of the cell body, the swimming space is severely constrained. This leads to a series of successive collisions with the wall and causes the Paramecium to move back and forth exhibiting meandering behavior with a large number of turns,” they explained. With frequent reorientations, the “characteristic time for such swimmers tend to be on the lower side.”

Alternatively, if a paramecium is placed in a quasi-infinite fluid, they mostly execute ballistic swimming traits as they explore the free space, Jung explained. The somersault occurs when the Paramecium is placed in a rectangular channel, and when it pushes on the confining walls, it executes a self-bending of the body to reorient in a completely new direction.

“Animals including humans have evolved various tricks and skills to survive in the wild. Like in a book or in the movie “The Maze Runner”, when we are all stuck in an unknown maze, an extraordinary navigating ability rather than stereotypical behaviors would be helpful to find a way out. In this study, when single-cell organisms were all trapped in a maze, they exhibited a surprising ability of self-bending (or somersaulting) to navigate or escape from a maze,” Jung said.