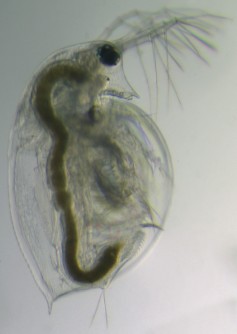 Daphnia pulex is a model organism used by geneticists.

Newswise — The sequences of nonsense DNA that interrupt genes could be far more important to the evolution of genomes than previously thought, according to a recent Science report by Indiana University Bloomington and University of New Hampshire biologists.

Their study of the model organism Daphnia pulex (water flea) is the first to demonstrate the colonization of a single lineage by "introns," as the interrupting sequences are known. The scientists say introns are inserted into the genome far more frequently than current models predict. The scientists also found what appear to be "hot spots" for intron insertion -- areas of the genome where repeated insertions are more likely to occur. And surprisingly, the vast majority of intron DNA sequences the scientists examined were of unknown origin.

"The thinking has been that these insertion events are very rare because they always have bad effects," said postdoctoral fellow Abraham Tucker, a lead author of the Science paper.

Graduate student Wenli Li, whose participation in the research overlaps her dissertation work, was the paper's co-lead author. Li said she was particularly interested in the notion of hot spots that make it more likely for separate lineages of Daphnia to gain introns in the same place (or the same general area) within the water fleas' genomes. Four of the 23 different kinds of introns the scientists found were not unique with respect to position. If introns were always inserted in random places within genes, the scientists would have expected zero introns to have identical insertion points.

"The most intriguing finding for me is the multiple instances of parallel intron gains, because this means that Daphnia is in an active phase of intron proliferation," Li said. "This makes Daphnia an extraordinary system to study intron evolution. In addition, we believe our work facilitates a more accurate estimate of intron gain rates, and directly challenges the assumption that parallel intron gains are rare in many prior analyses."

Whether or not Daphnia is typical of eukaryotes with respect to intron gain (and loss), IU Bloomington evolutionary biologist Michael Lynch, the project's principal investigator, agreed that the discovery of parallelism will surprise his colleagues.

"Remarkably, we have found many cases of parallel intron gains at essentially the same sites in independent genotypes," Lynch said. "This strongly argues against the common assumption that when two species share introns at the same site, it is always due to inheritance from a common ancestor."

A unique and important aspect of the scientists' work is that they focused on one species (Daphnia pulex). Past studies have looked at a few introns shared by vastly different species. In doing so, geneticists have almost certainly missed the ephemeral appearance of new introns, and therefore would come to the wrong conclusions about how introns are gained, why they are lost, and how frequently either occurs.

That many introns are not acquired from a common ancestor but are the result of separate insertion events, the scientists say, means that the rates of intron gain in any species' lineage could be considerably higher than currently estimated.

Even if the rates of intron gain and loss of introns in Daphnia pulex are unlike those found in humans, sunflowers, and mushrooms, the Science report suggests geneticists and genome biologists take another look at introns, some of which could have been the result of hot spot insertion events in separate lines.

"The immediate question will be whether our findings can readily be extended to other species," Lynch said. "We are, in fact, doing that now. In addition, there is need for some solid molecular work to test our hypothesis about the mechanism of intron origin."

Intron is short for "intragenic region," a segment of DNA embedded within the coding portion of a gene. Introns are common in eukaryotic organisms -- animals, plants, fungi, and protists. When genes are expressed, special machinery within the cell nucleus usually removes the introns, thereby producing a transcript of the gene that is devoid of nonsense. Some introns are very small (20 DNA base pairs or fewer). A few introns are shockingly long (nearly 500,000 base pairs) long. Within a gene region, the total length of introns may dwarf the actual coding regions. There's a gene on humans' 22nd chromosome that is so riddled with introns, only 10 percent of it actually contains coding DNA. The rest is comprised of introns.

Scientists have generally assumed introns are so deleterious, their insertion almost always spells doom for the cell lines within individual organisms that produce offspring. With the exception of alternative splicing, introns serve no apparent function and consume needless energy when cells must duplicate all of their DNA. More importantly, the insertion of a new intron in a bad place can interfere with the cellular machinery's expression of an important gene. Experts have taken all of this to mean intron insertions are extremely rare events.

Almost all of the introns the IU Bloomington biologists located possessed a sequence of indeterminate origin. Only one of the 24 identified sequences bore a resemblance to a specific DNA sequences associated either with the Daphnia genome or its parasites. The other 23 introns had sequences that appear to have been improvised by the machinery responsible for DNA synthesis. "Our molecular analyses have enabled us to reject a number of hypotheses for the mechanism of intron origins, while clearly indicating an entirely unexpected pathway -- emergence as accidents arising during the repair of double-strand breaks," Lynch said.

Abraham Tucker, now at Indiana University Bloomington, and paper co-author Way Sung were both graduate students of William Kelley Thomas at the University of New Hampshire's Hubbard Center for Genome Studies when they did the bioinformatic analysis of the Daphnia genome that led to the findings of this paper. Drawing on longtime collaborations between Lynch's lab and the Hubbard Center on the daphnia genome project, the two were able to access all daphnia genome sequences.

"It was a very intense analysis, but it was obvious within a few days that there was some very interesting data," says Thomas, who is Hubbard Professor in Genomics and director of the Hubbard Center for Genome Studies. "This was a wonderful collaborative project."

This research was funded with grants from the National Science Foundation.