Cutting edge technology applied to head and neck tumors reveals a unique transition that is linked to cancer metastasis. 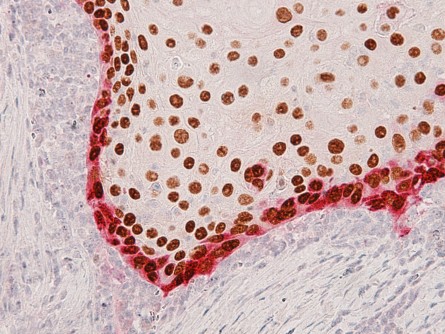 A head and neck tumor (squamous cell carcinoma) stained for markers of cancer (p63; brown) and partial epithelial-to-mesenchymal transition (LAMB3; red) demonstrates cells having undergone a unique transition at the tumor's leading edge, which based on new research may be responsible for cancer spread and metastasis to lymph nodes.

Newswise — (BOSTON) – Head and neck tumors that contain cells undergoing a partial epithelial-to-mesenchymal transition — which transforms them from neatly organized blocks into irregular structures that extrude into the surrounding environment — are more likely to invade and spread to other parts of the body, according to a new study led by researchers from Mass. Eye and Ear, Massachusetts General Hospital (MGH) and the Broad Institute of MIT and Harvard. In a report published online in Cell, the researchers have created the first atlas of head and neck cancer, revealing the many different kinds of cells, cancerous and non-cancerous, in primary head and neck tumors and their metastases. The findings provide important clues as to how head and neck cancers metastasize, and may have implications for other common cancers as well.

Using a process known as single-cell RNA-sequencing, the researchers analyzed more than 6,000 individual cells from head and neck squamous cell carcinomas — the most common head and neck tumor. Through their analysis, the research team created an atlas of all the different cells present in head and neck cancer. They were also able to characterize a unique structural transition involving cancer cells and normal cells in their environment that allows tumors to spread.

“This is the clearest picture we’ve had of this kind of structural transition in a human tumor,” said co-senior author Bradley E. Bernstein, M.D., Ph.D., of the MGH Cancer Center, a Professor of Pathology at Harvard Medical School and a member of the Broad Institute. “For years, it’s been known that cells can lose their connections to the surrounding tissue and become more mobile, but when, how and where this occurs in human cancer has been long debated.”

Partial epithelial-to-mesenchymal transition is a process that causes cells that are ordinarily static to become mobile. The findings described in the Cell study suggest that head and neck tumors temporarily “borrow” this process used in normal embryonic development to invade nearby tissues and spread, and these findings could extend to similar cancers such as breast, prostate and lung cancers.

“While we were excited to provide a rich, detailed description of the genes in every cell type in head and neck tumors, we quickly realized there were unique cancer cells in some patients but not in others,” said co-lead author Sid Puram, M.D., Ph.D., a chief resident in otolaryngology at Mass. Eye and Ear/Harvard Medical School. “We wondered whether these cells could explain why some tumors spread to the neck and beyond, while others do not.”

Head and neck tumors are common in the United States and worldwide, representing the 6th leading cause of cancer-related illness and death. Although these tumors are often found in the tongue, cheek or throat, making them accessible to surgery, they can spread further through the lymph nodes. Unfortunately, once the cancer spreads in this manner, through a process called metastasis, treatment becomes more challenging and patients often have poor outcomes.

Clinicians treating head and neck cancer have faced the daunting possibility of tumor spread for years, with surgeons remaining unsure how to look for metastasis and how to decide whether lymph node tissues in the neck need to be removed. Understanding this process could avoid unnecessary surgery, which carries risks to nerves of the head and neck, and could also aid in planning chemotherapy and radiation treatment.

The researchers envision a future in which identifying tumors undergoing this transition may influence the way that cancer patients are clinically managed. Such knowledge would allow surgeons to make decisions based on the biology of each patient’s tumor, rather than the tumor’s size, and to predict its likelihood of spreading to other parts of the body.

“We may be able to predict with better accuracy than our current staging system which patients will have a poorer prognosis,” said co-senior author Derrick T. Lin, M.D., Director of Head and Neck Surgical Oncology at Mass. Eye and Ear and the Daniel Miller Associate Professor of Otolaryngology at Harvard Medical School. “Predicting which patients will develop lymph node metastasis can better inform our treatment strategies. This insight could also lead to the development of new therapies that target this process and prevent metastasis beyond the primary site. Because metastasis is one of the hardest problems to treat and one of the biggest reasons cancer patients do not survive, these findings open up a whole new area of research for the field.”

Mass. Eye and Ear clinicians and scientists are driven by a mission to find cures for blindness, deafness and diseases of the head and neck.  Now united with Schepens Eye Research Institute, Mass. Eye and Ear is the world's largest vision and hearing research center, developing new treatments and cures through discovery and innovation. Mass. Eye and Ear is a Harvard Medical School teaching hospital and trains future medical leaders in ophthalmology and otolaryngology, through residency as well as clinical and research fellowships.  Internationally acclaimed since its founding in 1824, Mass. Eye and Ear employs full-time, board-certified physicians who offer high-quality and affordable specialty care that ranges from the routine to the very complex. In the 2017–2018 “Best Hospitals Survey,” U.S. News & World Report ranked Mass. Eye and Ear #2 in the nation ear, nose and throat care and #4 for eye care. For more information about life-changing care and research, or to learn how you can help, please visit MassEyeAndEar.org.