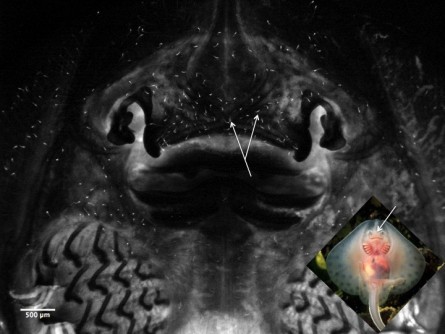 Newswise — “Blackheads full of Jell-O” is how Molly Phillips, a graduate researcher at the University of Washington, describes the pores dotting the underside of some fish faces. These blackheads are no blemishes though—they provide a ‘sixth sense’ to cartilaginous fish, such as sharks and rays. Called ampullae of Lorenzini, the pores are actually gel-filled sensory organs used to detect changes in the local electric field. Because all living things have their own electric fields, changes in the environment detected by the pores can help these sharks and rays locate either friend or food.

Phillips has discovered that the gel inside these tiny organs contains chitin.

Chitin is one of the most common polymers in the natural world, and is often a structural component in organisms. For example, chitin is found in the exoskeletons of insects and crustaceans, as well as in the cell walls of fungi. However, up until two years ago, it was widely accepted that vertebrates had lost the ability to produce chitin.  In 2015, Phillips’ graduate advisor, Dr. Chris T. Amemiya, and his colleagues confirmed the presence and production of chitin in zebrafish. Since then, chitin has been found in a number of unexpected places, such as in the scales of fish, appendages of larval salamanders, and now the faces of cartilaginous fish.

Because chitin is a polymer known for being tough and rigid, organisms that need to break it down for food possess a specialized enzyme. A part of this enzyme, called the binding domain, attaches very strongly to chitin. “We can steal the binding domain of this enzyme and attach a flashlight to it,” Phillips explains. Doing so allows scientists to visualize where exactly the chitin exists on an animal. In this case, Phillips found “packets” of chitin throughout the gel of electrosensory organs in all major groups of cartilaginous fish.

Where then, are these packets of chitin coming from? Phillips’ next step was to verify that the molecule was being produced by the fish themselves and not being acquired from the environment. Production of chitin requires a protein called chitin synthase, so Phillips began looking for the chitin synthase gene in the DNA of the little skate, Leucoraja erinacea. Although the genome of the little skate has been sequenced, many of genes have not been identified, making this process particularly challenging. However, after combing through the genetic data and comparing them with known sequences of chitin synthases in other animals, Phillips identified two separate chitin synthase genes.

Next, Phillips had to show chitin synthase was being made from the chitin synthase genes in the cells around the electrosensory pores. She used a method called in situ hybridization to detect where in the animals the chitin synthase protein is actively being made. In embryonic little skates, she found that these proteins are only expressed in cells at the opening of the electrosensory pores. This coincides with results from her experiments using the binding domain “flashlight”, where the opening of the pore was the brightest, indicating greater amounts of chitin.

As for what the chitin might be doing in an organ specialized for transmitting electrical signals?  Phillips emphasizes that “we still have no functional understanding of chitin in the electrosensory system…much less in the whole of all vertebrates.” However, she has some ideas. The ‘sensory’ part of the electrosensory organs is a collection of specialized electroreceptor cells lining a bulb at the end of each pore. Nerves from these cells send electrical information about the environment to the fish’s brain, helping to paint a picture of its surroundings. However, before any of that process occurs, any change in the electric environment must travel through an entire canal of extremely viscous gel to reach the electroreceptor cells. Maybe chitin plays a role in conducting electrical signals. Or, it might contribute to the structural integrity of the gel so the signal can pass through unobstructed. Whatever the function, it is sure to be shocking.