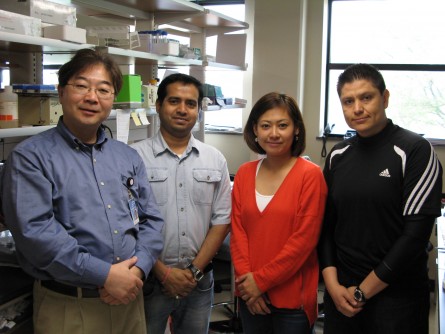 Newswise — Being able to use a drug already utilized in treating other diseases is a jackpot for cancer researchers. It doesn’t involve coming up with a new drug from scratch, and could potentially start being used on patients relatively quickly.

That’s what Tomoo Iwakuma, M.D., Ph.D., KU Cancer Center Cancer Biology member, and his team is hoping to accomplish with their research on the mutant version of the p53 tumor protein and how it is vulnerable to certain compounds.

When p53 is functioning normally, it regulates the cycle of a cell. It is known as a tumor suppressor because it does not allow cells to divide uncontrollably, the hallmark of a cancer cell. But once p53 turns mutant and goes from quiet Dr. Bruce Banner to the destructive Incredible Hulk, it’s no longer preventing cancer; it’s potentially causing it.

“This p53 is the most frequently mutated tumor suppressor, meaning cells can easily transform into cancer,” says Dr. Iwakuma. “It’s found in more than 50 percent of cancers.” These can include ovary, colon, stomach, lung, prostate cancers and sarcomas.

Dr. Iwakuma’s previous research on p53 showed that oncogenic stress or DNA damage causes the stabilization of the mutant version of p53. This stabilization is imperative for its gain-of-function phenotypes, or the composite of an organism's observable characteristics or traits. This means the cell gains new and abnormal oncogenic functions—anything from cell proliferation to drug resistant characteristics to tumorigenesis (the production or formation of a tumor) to metastasis.

Downregulating, or decreasing the levels of gain-of-function p53 mutants, changes the abilities to grow spheres and form tumors of human osteosarcoma cells.

Now the research group is making mutant p53 a target for drugs. Drugs that can deplete mutant p53 could potentially be used as cancer treatments. Now the question is: which drug?

Dr. Iwakuma’s running hypothesis is that these drugs that could diminish mutant p53 will, in turn, lessen the malignant properties of different types of cancer cells that express mutant p53.

“We’re looking at why and how a drug depletes the mutant p53, along with the mechanism of what is happening to deplete it,” says Dr. Iwakuma. In other words, is the mutant p53 going back to its original wild-type form as a tumor suppressor? Or is it simply losing that “gain-of-function” that leads to tumor growth and metastasis?

His team tested drugs on osteosarcoma cells using a luciferase-based assay (enzymes that emit light), which was used to monitor the expression level of a mutant p53. It’s extremely sensitive, so it was able to show even the smallest reduction of mutant p53 by certain compounds. The researchers started testing 9,718 compounds and have narrowed them down to just two drugs. They are continuing to study on animal models.

Dr. Iwakuma is looking to reverse the Dr. Jekyll/Mr. Hyde transformation of mutant p53. While mutant p53 is the “ultimate bad guy,” if any of the drugs he is testing can stop or reverse mutant p53, it could go a long way as a cancer therapy for patients with myriad number of cancers.

They are also investigating whether or not the compounds may restore the activity of other tumor suppressors that have been inhibited by mutant p53. These suppressors help regulate cell growth and prevent cell proliferation and tumorigenesis.

Or it could be another mechanism all together. The team is currently investigating what exactly is at play once these compounds deplete mutant p53.

“Once p53 has a mutation, it’s a really bad guy,” says Dr. Iwakuma. “But it also means it is a druggable target, as the p53 mutation is detected only in tumors but not in normal tissues. Thus, we can make tumors more susceptible to chemotherapy and other therapies.”