Ions in the Fire 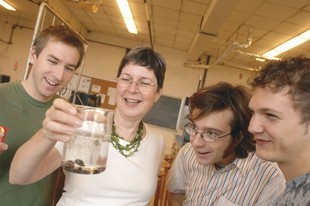 Newswise — We heard it through the grapevine"¦ raisins actually can dance.

Just take a couple of raisins and plop them in clear glass filled with colourless soda, like 7-Up or Sprite. Then sit back and watch the raisins shimmy and shake, sink and then rise and start all over again.

Renowned Dalhousie chemistry professor Mary Anne White has conducted this simple experiment, an oldie but a goodie, to explain the concept of buoyancy.

"I did this experiment, oh, maybe 20 years ago," says Dr. White. "And I can still remember the looks on the kids' faces. They were saucer-eyed."

Dr. White is the director of Dalhousie's Institute of Research in Materials. Insatiably curious, she loves being in her lab. But outreach and communicating the gee-whiz of science have always been important too. Telling other people, from kids to parliamentarians, about science enriches her own understanding, she says.

"Some scientists are so focused on their research they don't want to do anything else," says Dr. White, whose own research explores the heat-conducting properties of materials, including elephant tusks, crystals and cement. "But if I discover something neat, I just want to run out and tell someone about it."

She loves to teach, in the broadest sense. She's a regular contributor on CBC Radio's Maritime Noon, a frequent guest of CBC's science show Quirks & Quarks and has appeared on Discovery Channel's How Things Work. She's written textbooks, journal articles and activity booklets, and the latter have been distributed to thousands of kids by the Canadian Society for Chemistry. She's given an early morning lecture on science — in the "Bacon and Eggheads" series — to MPs and senators in Ottawa.

The trick to talking about science to a general audience is to strip out the jargon and explain concepts in words everyone can understand. Thus "thermochromic properties of materials" becomes "materials that change color with the temperature."

The other important thing is to respect the audience, says Dr. White. "Yes, you're a scientist, but some people may know more than you on a certain topic. If you can learn from them, why not?"

Her efforts haven't gone unnoticed. Dr. White didn't work with Donald Ramsay, but the researcher emeritus at the National Research Council thought enough of her efforts promoting and communicating science to nominate her for a special award of the Royal Society of Canada.

It was a touching and generous gesture. When Dr. White accepted the McNeil Medal at a ceremony last week, she thought of Dr. Ramsay, who recently passed away. By receiving the award, Dr. White joins some prestigious company; previous winners include David Suzuki, Quirks & Quarks host Bob MacDonald and the Discovery Channel's Jay Ingram.

"Talking about science has always been important to me," says Dr. White. "When you talk to people about science, they ask questions about things that we scientists didn't even think about. I find it refreshing. It makes me think."