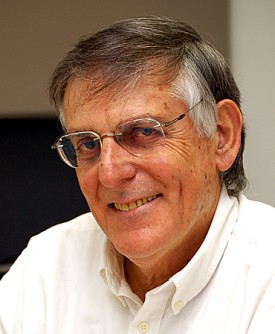 The foundation announced The Royal Swedish Academy of Sciences picked Shechtman “for the discovery of quasicrystals."

That 1982 discovery of crystalline materials whose atoms didn’t line up periodically like every crystal studied during 70 years of modern crystallography is regarded as a revolutionary find that changed ideas about matter and its atomic arrangement.

Shechtman, who goes by “Danny,” compared winning the Nobel Prize to carrying a country’s flag at the Olympics. In this case, he’s carrying the banner for an international team of quasicrystal scientists.

“I am the spearhead of the science of quasicrystals, but without the thousands of enthusiastic scientists around the globe, quasicrystals would not be what they are today,” he said. “Quasicrystals are still an enigma in many ways, waiting to unfold, and I admire the researchers who over the years became friends and who for a quarter of a century have elucidated this science.”

“What Danny did was fantastic science,” she said. “He instigated a scientific revolution.”

That’s not what he set out to do during a sabbatical from the Technion and a two-year stint in the United States at what’s now known as the National Institute of Standards and Technology.

In his notebook that day, Shechtman wrote “(10 Fold ???).” Later, he found the pattern was really a five-fold rotation, but that didn’t show up in the first experiments.

“For 70 years until 1982, all crystals studied, hundreds of thousands of them, were found to be periodic,” he said. “Only certain rotational symmetries are allowed in this periodic array and these are 1,2,3,4,6 and nothing else. This is why, when I saw the ten-fold rotational symmetry, I was so surprised.”

Shechtman did follow-up experiments to confirm his findings and published his discovery in 1984. His work was widely questioned.

“For a long time it was me against the world,” he said. “I was a subject of ridicule and lectures about the basics of crystallography. The leader of the opposition to my findings was the two-time Nobel Laureate Linus Pauling, the idol of the American Chemical Society and one of the most famous scientists in the world. For years, till his last day, he fought against quasi-periodicity in crystals. He was wrong, and after a while, I enjoyed every moment of this scientific battle, knowing that he was wrong.”

Shechtman is an Iowa State professor of materials science and engineering, a research scientist for the Ames Laboratory and the Philip Tobias Professor of Materials Science at the Technion - Israel Institute of Technology. He is currently at the Technion in Haifa, Israel. The 70-year-old scientist joined Iowa State and the Ames Lab in 2004 and spends about four months a year in Iowa. He will return to Ames in mid-February.

He continues to study magnesium alloys and other materials that are strong but can also be stretched or shaped without breaking.

And although the applications of quasicrystals are limited, Shechtman said they are important for changing a long-held scientific paradigm.

“People should be interested in scientific advances because the body of knowledge generated by the scientific community improves our lives.” he said. “Go back 100 years and see the difference, including life expectancy and life quality.”