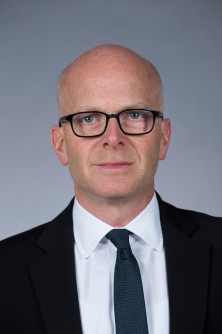 Newswise — AMES, Iowa – Thomas Leslie, professor of architecture at Iowa State University and internationally renowned expert on architectural history and practice, has been named a fellow of the American Institute of Architects.

Architects who have made significant contributions to the profession and society and who exemplify architectural excellence can become a member of the AIA College of Fellows. Only 3 percent of AIA members have earned this distinction.

Leslie received this recognition for his research and education – particularly on Chicago skyscrapers, Italian architect Pier Luigi Nervi, American architect Louis Kahn and post-war design for aviation. Leslie will join all new fellows at the College of Fellows Investiture Ceremony during AIA’s Conference on Architecture in June at St. Patrick’s Cathedral in New York City.

“What I do in the classroom and my research are all about trying to connect academia and the profession, so to be recognized by an organization that is all about practice and profession, that is particularly important to me,” Leslie said. “Having worked in the field and having been taught by people who are FAIA, I’ve known what this has meant for a long time. It is particularly nice to join a club of people for whom I’ve always had a great deal of respect.”

At Iowa State, his research focuses on how buildings get built.

“My research looks at how architecture gets practiced, and that tends to resonate with people in the profession,” Leslie said. “They’re able to read the research I do and no matter what era it’s from, they see themselves in it a little bit. I try to tell history from the studio table or the job site, putting myself in boots or behind a desk and thinking what it was like to practice in 1890s Chicago or 1950s Italy.”

The concept of learning through practice is woven into his studios at Iowa State.

“Complicated design problems, collaboration and interdisciplinary teams: These are all fundamental aspects of what it’s like to be an architect,” he said. “You’re never working alone, always with people who have related interests – but interests that are never perfectly congruent. A lot of us here do interdisciplinary studios. It’s about making connections to practice, and it resonates because of those connections.”

Cal Lewis, professor of architecture; and Gregory Palermo, professor emeritus of architecture – both former chairs of Iowa State’s architecture department and AIA fellows – put together Leslie’s FAIA nomination, with Lewis as the formal nominator. Leslie also received support from the architects for whom one of his professorships is named – Jon Pickard and William Chilton, both FAIA, principal architects at Pickard Chilton in Connecticut and ISU alumni – as well as Rod Kruse, FAIA, principal architect at BNIM in Des Moines and an ISU alumnus.