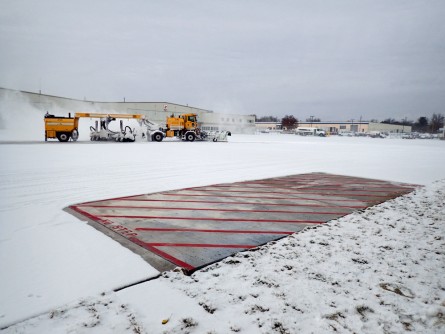 Iowa State engineers don't need a plow to clear snow from the heated test slabs they installed at the Des Moines International Airport. 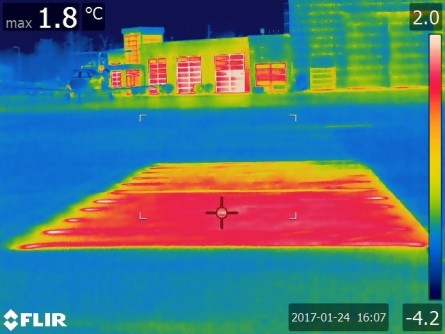 A thermal image of the heated airport pavements. 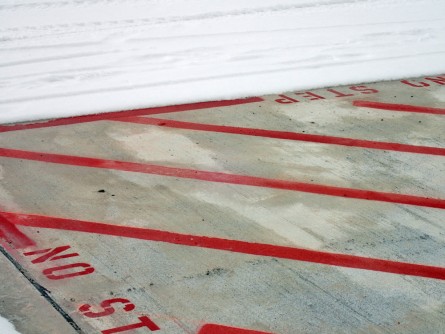 Newswise — AMES, Iowa – Iowa State University’s Halil Ceylan picked up his smartphone, opened up an app and called up the remote controls for the first full-scale test slabs of electrically conductive concrete installed at an American airport.

When a winter storm approaches, Ceylan can use that app to turn on the heated pavement system and, thanks to real-time video capability, watch as snow and ice melts away.

Late last fall Ceylan and his research team from Iowa State’s Program for Sustainable Pavement Engineering and Research installed two, 15-by-13.5-foot test slabs of electrically conductive concrete into the apron at the southwest corner of the Elliott Aviation hangar on the north side of the Des Moines International Airport. The hangar is in the middle of the general aviation apron devoted to smaller aircraft.

Ceylan, an Iowa State professor of civil, construction and environmental engineering, still working the system’s phone app, called up pictures of the slabs during one of this winter’s rare snowfalls. The apron all around the test slabs was covered with an inch or two of white snow; the two slabs, marked by diagonally painted red stripes, were clear and drying.

“We have proven this technology does work,” Ceylan said. “Our goal is to keep airports open, safe and accessible. We don’t want any slips or falls, or any aircraft skidding off runways. Our technologies can contribute to providing a safe environment and fewer delays.”

The cost of heating pavementIt’s the first thing Ceylan brings up after noting the success of the test slabs at the Des Moines airport: “People wonder how much this costs.”

Seven hours “is way more than enough to melt an inch of ice or snow,” Ceylan said.

While the installation costs would be higher than regular pavements, the heated pavement technology also saves on the cost of plows, de-icing chemicals and wastewater treatment of chemical runoff.

Ali Nahvi, a graduate student in civil, construction and environmental engineering and part of Ceylan’s research group, has been analyzing the economics of heated runways at airports.

And so far, Ceylan said Nahvi’s data say the benefits are greater than the costs. How it worksCeylan, calling up video of the test slabs the day after a light snowfall, noted how dry they were.

“It’s not snowing right now, but it’s still cold with snow and ice on the ground,” he said. “It’s really neat how it works.”

The test slabs of electrically conductive concrete are made up of 1 percent carbon fiber and a special mix of cement, sand and rocks. The carbon fiber allows the concrete to conduct electricity, but there is some resistance to the moving electrons, which creates heat.

Alireza Sassani, a doctoral student in civil, construction and environmental engineering, led studies of the concrete mix. With help from the National Concrete Pavement Technology Center based at Iowa State, he prepared hundreds of concrete samples in the lab to find just the right combination of compressive strength, tensile strength, workability, durability and electrical conductivity.

The test slabs at the Des Moines airport are 7.5 inches thick in two layers – the bottom 4 inches are regular concrete, the top 3.5 are electrically conductive concrete. Between the layers are twelve metal electrodes, six per slab, running the width of each slab. The electrodes are wired to the nearby hangar’s power supply.

The slabs are also wired with various sensors: temperature probes, strain gauges, humidity sensors and more. There are two surveillance cameras mounted nearby. And the team just acquired its newest research tool – a high-grade thermal camera.

Hesham Abdualla and Sajed Sadati, doctoral students in civil, construction and environmental engineering, recently demonstrated the camera by sending 70 volts of power through a test sample of electrically conductive concrete that was 14 inches long, 4 inches wide and 4 inches thick.

Ali Arabzadeh, another doctoral student in civil, construction and environmental engineering, set the thermal camera nearby and you could watch the electrodes heat up, creating thermal images in reds and whites. Then, as the carbon fibers in the test sample spread electricity and heat, the camera’s images turned from blues to greens to yellows. After several minutes, the camera recorded a sample temperature of about 75 degrees.

Airport perspectiveCeylan’s heated pavement research is part of the Federal Aviation Administration’s Center of Excellence Partnership to Enhance General Aviation Safety, Accessibility and Sustainability, or PEGASAS. The partnership was established in 2012 and is led by researchers at Purdue University. Other core members are from Iowa State, The Ohio State University, Georgia Institute of Technology, Florida Institute of Technology and Texas A&M University.

The program is providing about $2.2 million for Iowa State’s full-scale demonstration of snow- and ice-free airfield pavements and other studies of heated pavements. The university is matching those funds.

After early success with heated pavements in his campus lab, Ceylan and his research group were ready to move on to larger-scale studies. That led to discussions about airport tests with Bryan Belt, the director of engineering and planning at the Des Moines International Airport.

Belt said this is the first major research project at the airport. With Ames and Iowa State only about 40 miles away and the FAA as a major partner of the airport, he thought the airport should find a way to participate.

“It’s a major accomplishment to coordinate with the airport,” Ceylan said. “We really appreciate the cooperation.”

Through their discussions, Ceylan and Belt thought it would be better and safer for the initial tests to be on a section of airport apron before trying this technology at other areas of the airport.

Ceylan noted that aprons are the most congested areas at airports and it takes a long time to clear them of snow and ice because big plows and other heavy equipment can’t work in such busy areas.

So Belt identified a site and with the help of a project team from Foth Infrastructure and Environment, the test slabs were installed last October and November. Belt has checked on the test slabs three times during snowy or icy weather.

“It was fascinating to see that it worked,” Belt said, noting Ceylan is now “trying to beat the weather to the punch” by turning on the heated pavements even before the snow starts flying.

Belt said he can see the technology being useful in and around gates where there are lots of airport ground-handling equipment and employee activity. He also said heated pavements would be a big help at the front of the terminal with its sidewalks, crosswalks and ramps – he said it takes a lot of work to keep the areas clear and safe.

“There are definitely some opportunities for the technology,” he said.

But, he said he’s going to take a wait-and-see approach until there’s more testing and there’s more information about installation and operating costs.

The testing is hardly over, Ceylan said.

In addition to collecting more data on the electrically conductive concrete, he said the team will soon be adding a hydrophobic coating to one of the test slabs. The water-repelling coating is designed to keep snow and ice from sticking to the pavement, making it much easier to keep clear and dry.

“We’re looking at hybrid heated pavements systems,” Ceylan said. “We think we can take advantage of multiple technologies to keep airports open and safe during the winter.” 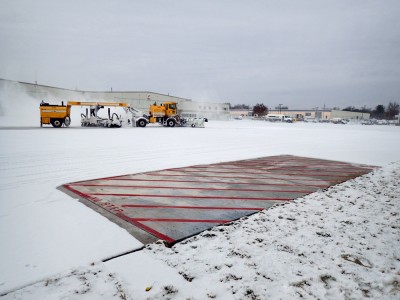 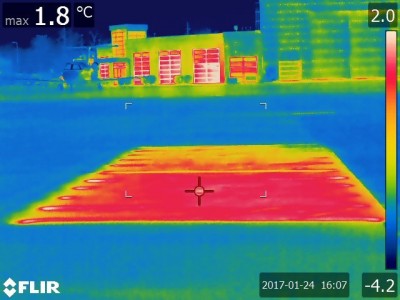 Caption: A thermal image of the heated airport pavements. 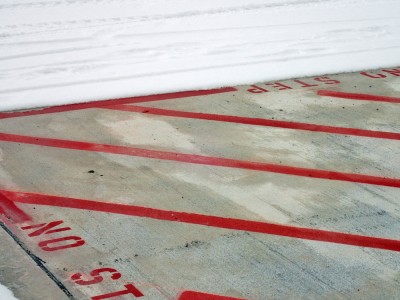