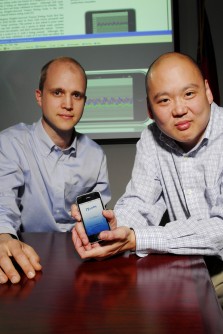 GTRI research scientists Robert Delano (left) and Brian Parise developed iTrem as a tool that could potentially benefit people with Parkinson’s disease. It takes advantage of accelerometers built into the iPhone. 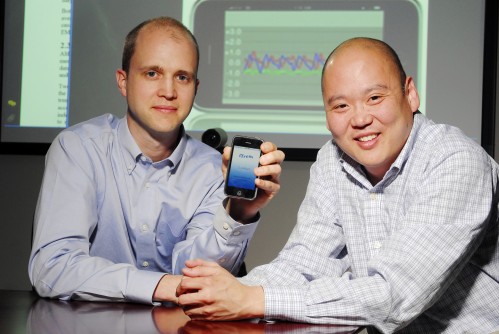 GTRI research scientists Robert Delano (left) and Brian Parise developed iTrem as a tool that could potentially benefit people with Parkinson’s disease. It takes advantage of accelerometers built into the iPhone.

Newswise — Researchers at the Georgia Tech Research Institute (GTRI) have developed a novel iPhone application that may enable persons with Parkinson’s disease and certain other neurological conditions to use the ubiquitous devices to collect data on hand and arm tremors and relay the results to medical personnel.

The researchers believe the application could replace subjective tests now used to assess the severity of tremors, while potentially allowing more frequent patient monitoring without costly visits to medical facilities.

The program – known as iTrem – could be offered later this year by the App Store, an Apple Inc. website that sells iPhone applications. But iTrem will first undergo a clinical study at Emory University and must receive any required approvals from the Food and Drug Administration.

“We expect iTrem to be a very useful tool for patients and their caregivers,” said Brian Parise, a research scientist who is principal investigator for the project along with Robert Delano, another GTRI research scientist. “And as a downloadable application, it also promises to be convenient and cost-effective.”

iTrem utilizes the iPhone’s built-in accelerometer to collect data on a patient in his or her home or office. The application directly tracks tremor information currently, and in the future will use simple puzzle games to record tremor data, which will then be processed and transmitted.

The researchers expect the clinical trial to show that data gathered by the program would allow physicians to remotely monitor the degree of disability, progression and medication response among patients with tremor-related conditions. In addition, iTrem offers a social component that allows people to share stories, pictures and data.

iTrem’s developers are working with the Advanced Technology Development Center (ATDC) to form a startup company based on iTrem and future applications that might take advantage of iPhone capabilities. ATDC is a startup accelerator based at Georgia Tech that helps Georgia entrepreneurs launch and build successful technology companies.

The GTRI team plans ongoing development of iTrem’s interface, based on responses from doctors and patients. They're also investigating other consumer technologies with diagnostic potential, including the tiny gyroscopes now available in some cellular phones.

Future developments will include the addition of several other Parkinson’s related tests and investigation of gait analysis in a joint effort with the University of South Florida and the James A. Haley Veterans’ Hospital in Tampa, Fla. Additional developments may utilize the phone for detecting and analyzing dyskinesia, a movement disorder.

More than 10 million people in the U.S. have tremor-related disease, including Parkinson's, essential tremor and multiple sclerosis, Delano said. Data collected by iTrem could enhance research on tremor disorders, in addition to supporting treatment for current patients, he added.

Most current measurement techniques used by doctors are subjective and are performed infrequently, Delano said. Complex diagnostic procedures such as electroencephalography and electromyography are objective and thorough, but are rarely performed because they're lengthy, expensive and require a clinical setting. The result is that little data about tremor has been available to track the effectiveness of medication and therapy over time.

By contrast, he said, the ease of gathering tremor data with iTrem could help lead to a significant expansion of research in this area, as a wealth of objective data is collected and analyzed.

“Even factoring in the cost of an iPhone, using iTrem is likely to be more convenient and less expensive for patients than office visits, and the data are accurate and abundant,” Delano said.

A clinical study involving iTrem use is expected to start soon at Emory University’s Movement Disorder Clinic. The study will be led by Dr. Stewart Factor, a researcher in the field of Parkinson's disease at the Emory School of Medicine.

The GTRI development team presented a paper on iTrem in January at the 2011 International Conference on Health Informatics.

Delano explained that the development of iTrem was linked to his own diagnosis with Parkinson's disease several years ago. He eventually became frustrated with the subjective approaches commonplace in the characterizing of patient tremor symptoms.

“Currently, doctors observe tremor during office visits and rate it on a subjective scale of zero to four. That approach seemed outdated to me, considering all the technology now available,” Delano said. “My wife Heather, who’s an engineer, remarked that maybe that we could try putting some accelerometers on my arm. That made me think of the accelerometer in the iPhone – and here we are.” Research News & Publications OfficeGeorgia Institute of Technology75 Fifth Street, N.W., Suite 314Atlanta, Georgia 30308 USA