Is a Russian Peninsula Really Part of North America? 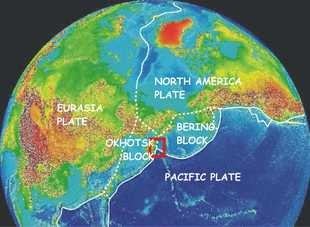 In this view of tectonic plate convergence between North America and Asia, the Kamchatka Peninsula lies on the Okhotsk block in the box at the center of the map.

Newswise — For many years geologists have harbored a belief that the Kamchatka Peninsula, shrouded in mystery and secrecy on Russia's east coast, actually sits on the same tectonic plate as the mainland United States, Canada and Mexico.

The North America plate extends through Alaska across the Bering Strait and into Siberia, but the question is whether it reaches as far south as Kamchatka.

The idea that the peninsula is part of the North America plate is perhaps a case of "tectonic imperialism" reinforced by a lack of evidence to the contrary, said Jody Bourgeois, a University of Washington Earth and space sciences professor who studies historic and prehistoric evidence of earthquakes and tsunamis.

But new research of earthquakes and tsunamis along the Bering Sea coastline, including a magnitude 7.7 quake in 1969, suggests that Kamchatka sits atop a smaller plate called the Okhotsk block, which is being deformed in a sort of convergence zone of tectonic plates, Bourgeois said.

Another magnitude 7.7 earthquake on April 21 bolsters the evidence, she said, and a magnitude 6.6 quake on April 29 also could help clarify the picture. The earthquakes last month were not widely reported because they did not produce widespread damage or fatalities on the sparsely populated peninsula, which separates the Okhotsk Sea on the west from the Bering Sea and North Pacific Ocean on the east.

In their research, Bourgeois and her colleagues examined coastal terrain on the northern part of the peninsula, an area that has been pushed up and tilted, and they judged that what they saw was caused by compression.

"What we are finding cannot be explained by a model that places Kamchatka on the North America plate," said Bourgeois, who is a co-author of a paper documenting the findings in the May edition of the journal Geology. Other authors are Kevin Pedoja of the China Academy of Sciences, Tatiana Pinegina of the Institute of Volcanology and Seismology in Russia, and Bretwood Higman, a UW geology doctoral student.

Bourgeois, who has spent eight field seasons in Kamchatka, also is lead author of a paper published in March in the Geological Society of America Bulletin. Co-authors are Pinegina, Vera Ponomareva of the Institute of Volcanology and Seismology and Natalia Zaretskaia of Russia's Geological Institute.

Kamchatka lies about 700 miles north-northeast from the Japanese island of Hokkaido. Bears, salmon and ruggedly beautiful snow-capped volcanoes are plentiful, but the weather can be forbidding and few visitors have seen the peninsula. It was closed to outsiders by the Soviet military during World War II and the restrictions remained in place until 1990.

The region is tectonically complex, with three major plates " the North America, Eurasia and Pacific " coming together around two smaller structures, the Okhotsk and Bering blocks. In California, the Pacific plate and the North America plate form the San Andreas fault as they slide past each other. But in the Kamchatka area the Pacific, North America and Eurasia plates are converging, and the Bering block appears to be rotating.

All of those factors place pressure on the Okhotsk block and likely are responsible for the raised and tilted land the researchers found along the Kamchatka coast, Bourgeois said. Evidence of prehistoric tsunamis helps shed light on the processes at work on Kamchatka, while the 1969 earthquake and the one on April 21 provide the scientists with a means of calibrating their measurements to understand just how much the terrain has been squeezed.

"It's not just some big, general process that's causing the uplift," Bourgeois said. "This indicates a plate boundary."

Bourgeois is principal investigator for a multi-year project underwritten by the National Science Foundation to study details of Kamchatka's tectonics. The processes at work there, she said, are similar to those in the Cascadia region of Washington, Oregon and British Columbia. But it hasn't been very many years since people first recognized that land along the Washington coast was being raised by pressure from the Juan de Fuca tectonic plate subducting beneath the North America plate. That understanding came largely from prehistoric evidence, such as sand layers deposited along the coastline by tsunamis, because there are few events on the historical record.

"Some of the things they might have questioned about Cascadia 20 years ago are the things they're asking about northern Kamchatka now because there haven't been that many earthquakes," Bourgeois said.