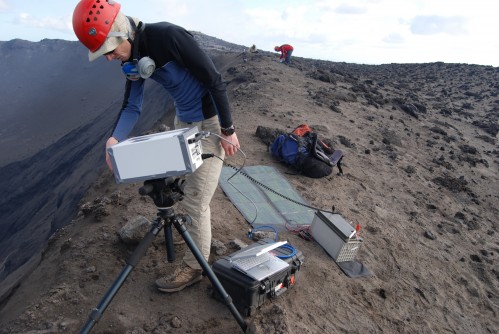 Simon Carn measures gas emissions from Mount Yasur in the island nation of Vanuatu in 2014.

“Something is going on under the volcano, probably a magma intrusion,” Carn says. “The big question we can’t really answer is if it will erupt or if it will subside and go quiet again. Fumaroles and gas emissions can be seen from satellites. High-resolution satellite images of the crater allow us to see that there were some changes in late September.”

Agung has erupted about once per century for the past 5,000 years. It last erupted in 1963, killing more than 1,000 people. A detectable drop in planetary temperature—a few tenths of a degree—in 1964 followed. A seismic swarm, an increase in seismic activity around the volcano, has been detectable for weeks by seismographic equipment, and several earthquakes have been felt by humans.

“They have evacuated a lot of people from around the volcano, but volcanic unrest can persist for months or even decades without an eruption.”