Is Exercise Safe for Kids with Sickle Cell Disease?

Study will look at clinical, physiologic and genetic signs of inflammation in response to exercise in children with sickle cell disease 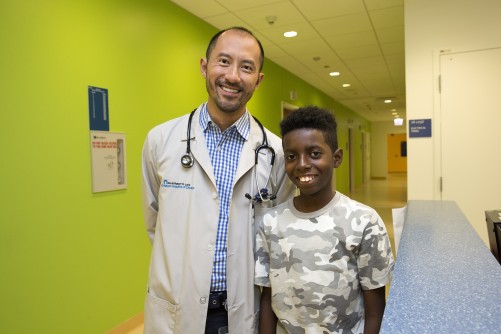 Newswise — While regular exercise is known to reduce inflammation over time, it actually increases inflammation in the short term. This is a concern for children with sickle cell disease, a condition that is marked by increased inflammation that can cause severe pain. The pain episodes in sickle cell disease are due to the abnormally shaped red blood cells that can get clogged in the blood vessels, a situation that could get exacerbated by more inflammation. But is there a level of exercise that is safe for these children? Primary Investigator Robert Liem, MD, from Stanley Manne Children’s Research Institute at Ann & Robert H. Lurie Children’s Hospital of Chicago, and colleagues will address this question in a five-year multicenter study recently funded by a $2.7 million grant from the National Heart, Lung, and Blood Institute (NHLBI).

“Most children with sickle cell disease miss out on the important benefits of exercise because of unsubstantiated fears that it might be harmful in their condition. Our study will be the first step toward developing safe exercise guidelines for these children,” says Liem, who is the Director of Comprehensive Sickle Cell Program at Lurie Children’s and an Associate Professor of Pediatrics at Northwestern University Feinberg School of Medicine. “If we can establish the safety of exercise in children with sickle cell disease, then they won’t have to miss gym class or be kept away from participating in school sports. This can have substantial impact on their quality of life.”

In the upcoming study, the team will look at the different ways moderate and vigorous intensity physical activity affects inflammation. Their hypothesis is that exercise is safe in this population and does not provoke sickle cell disease related complications. With these data, Liem hopes to develop a future clinical trial to look at whether or not regular exercise may instead have a beneficial impact on this disease.

The study will include 70 children with sickle cell disease and 70 children without the disease in order to compare outcomes. Participants will undergo an exercise test that mimics typical physical activity patterns in kids – brief intervals of stationary cycling, then resting, then cycling again, as when kids play basketball or soccer. Researchers will then examine the effect of this exercise on signs of inflammation in bloodwork. Since higher inflammation can also precipitate sickle cell disease related breathing problems, researchers also will conduct lung function tests to see if there is evidence of asthma-like changes after exercise. They also will evaluate inflammation pathways on the genetic level, checking whether certain genes turn on or not in response to exercise.

“The genomic aspect is the most innovative part of our study,” says Liem. “When we talk about exercise being good for you, we need to know what is happening on the genetic and molecular level. We want to see how the genetic changes regulate the inflammation response to exercise. We hope this will provide important evidence of exercise safety in kids with sickle cell disease.”

Liem expects to start study enrollment in the fall of 2017. Lurie Children’s is the lead site, collaborating with Columbia University, St. Jude Children’s Research Hospital, University of Illinois at Chicago and University of California Irvine. Results will provide critical safety data for the development of clinical trials on exercise benefits in children with sickle cell disease.